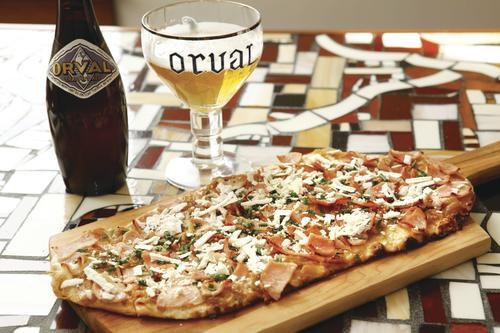 There's an old line, somewhere between a joke and a truism, about a place so popular that no one goes there anymore. To us, Point Brugge, the charming, Belgian-style bistro in Point Breeze, is the embodiment of such a restaurant. The food is so appealing, the sociable vibe so convivial, and the beer selection so well curated that everyone we know loves to go there -- and none of us do. Part of its neighborly charm is that it doesn't take reservations, so there's always an extravagant wait, endured standing in the press of other would-be clientele.

Thus, the long-delayed opening of Park Bruges, in Highland Park, was delightful news to us. As the name hints, the new restaurant is a cousin, rather than an identical twin, of the original. Most notably, Park Bruges is located in a completely rebuilt and expanded old commercial building in the heart of Highland Park's sleepy, but increasingly foodie-friendly, business district. In place of its predecessor's intimate yet contemporary interior, Park Bruges' space is bigger, brighter and, with its floor of tiny round tiles and darker woodwork, evokes a slightly older Europe.

Bigger may or may not be better, but in this case it didn't lead to a shorter wait. Park Bruges also doesn't take reservations, and at 7 p.m. on a Wednesday, we must have just missed the main seating, because we were promised a 45-minute wait. Happily, the owners saw fit to include a pleasant little waiting area, complete with a bench alongside the big front window, and we were told that we could order drinks and even starters there. Fortunately, space opened at the bar before we made our food choices, so we enjoyed moules (mussels) and chipotle poutine there, not on our laps.

A traditional Belgian favorite, moules -- usually served with potato frites -- is a mainstay of Point Brugge's menu that has naturally made the leap to Park Bruges. There, in an indication of the new establishment's new direction, the Prince Edward Island mussels are offered in two cooking liquids: the venerable white wine, cream and garlic; and spicy Creole with andouille sausage, peppers and Maytag bleu cheese. In a sign that the kitchen is working from a vision, rather than just a plan to add variety for those who don't love Belgian food, most of the new flavors on Park Bruges' menu are Latin; there are also fusion-y riffs on Belgian classics, such as a daily special of braised short ribs over orrechiette pasta.

Feeling traditionalist, we went with the classic moules, and were reminded of why we fell in love with Belgian food in the first place. The mussels were extraordinarily plump, and the broth was enriched with just enough cream to create a velvety, but not heavy, sensation in our mouths. Served as a sauce-sopping side, the baguette was probably the best we've ever had in the States, with a thick crust that crackled and a light crumb with just a hint of chew. Excellent as the mussels were, a bowl of the broth with half a loaf of that baguette would have been almost as satisfying.

Poutine, from Francophone Canada, was a new addition to the Park Bruges menu also offered in classic and updated preparations. The former is frites smothered in beef-stock gravy and cheese curds; the latter, carnitas, is a Park Bruges invention also involving chipotle-seasoned pulled pork, scallions and cilantro. Decadence aside, poutine has long been absent from local menus mostly due to a lack of curds in local markets. But the artisan revolution continues to bring regional favorites from around the world to local tables; Park Bruges is able to source fresh white-cheddar curds from eastern Ohio.

The addition of chipotle peppers to the non-traditional version took things to another level. The dish was not spicy: The smoked chili added flavor, not heat. Although with plenty of crispy-creamy fries, gravy and cheese, the meat could have afforded to offer more kick. Still, the savory combination of flavors was irresistible, and we made short work of our plate.

Tarte flambée is a Belgian flatbread with a cracker-thin crust offset by just a bit of chew and a variety of toppings. The three versions on offer at Park Bruges are uniformly mouthwatering, and although they hew to the cheese-meat-veg model of standard pizza, no one would mistake them for Italian. Unfortunately, the very promising combination of ham, caramelized onions and ricotta salata suffered from far too much salt, whether added in the kitchen or integral to the aged ricotta. We can attest that the mushroom version (fortuitously sampled from the plates of some friends that happened to stop in; it's that kind of place) had no such imbalance, and that its toppings were well cooked and tasty.

Park Bruges'steak frites reminded us that meat is what a kitchen makes of it, not by tarting it up, but by selecting the right purveyor, trimming the steak carefully and getting the heat just right. The New York strip actually had detectable crunch to its char, yet only hinted at actual charred (read: burned) flavors. The meat within was tender, pink and fine-grained, with a beefiness somewhere between bland filet and primal rib eye. We'd put this steak up against those from most of the top-shelf steakhouses in the city.

Alongside, the frites and sautéed vegetables were both superb. The latter, matchsticks of carrot and squash, were thin beyond julienne, requiring just the briefest of cooking and seasoning, resulting in a tender yet resilient texture and a flavor as fresh as raw.

Jason's Bruges burger, like the steak, was tender and juicy, served on a well-proportioned bun. The patty probably didn't need the added decadence of a rich short-rib topping, but it certainly benefited from a generous hand with sharp fontina cheese as well as a green-peppercorn mayo, whose distinctive flavor managed to break through all of those toppings while evoking a sophisticated steak sauce. Angelique's veggie burger was also a smashing success, the patty light yet substantial, and the edges taking on a satisfying crispness.

With a proven formula for success, Park Bruges' owners could have been forgiven for merely replicating Point Brugges in a new locale. To their great credit, they instead extended the kitchen's culinary reach, in a setting that recreates the comfort of the original yet brings its own charismatic appeal.