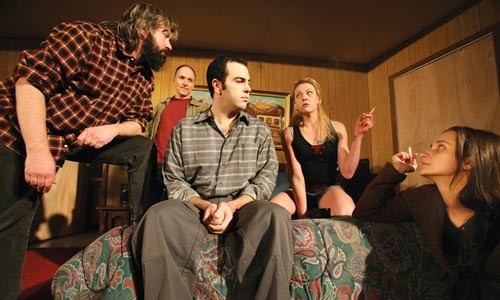 Peter Evans, the hero of Tracy Letts' play Bug, did his time in the first Gulf War and then a stint in an Army hospital. He drifts to Nowhere, Oklahoma, where he meets a waittress named Agnes.

I didn't want to leave. I just want to talk.

Peter is intelligent but anxious, like about smoke detectors.

Agnes has worries, too: Her brutal ex, Goss, is just out of prison.

Maybe you need a gun.

In her cheap motel room, they find comfort in each other, and in cocaine.

But Goss appears -- and so does a bug infestation, insects that burrow into the hard-luck couple's skin. And Peter thinks the government, after all, is after him.

I don't know that I'm not carrying some disease with me, some contagion.

Patrick Jordan, of scrappy but accomplished Pittsburgh-based theater company barebones productions, was already pursuing the stage rights to Bug last summer, when he met Shannon Cochran in Chicago. He'd seen Cochran's award-winning 2004 off-Broadway turn as Agnes, a role she'd originated in 1996, in London. Cochran, making a good living as an L.A.-based actor in TV (NYPD Blue, Star Trek: The Next Generation) and film (The Ring movies), likes shoestring theater. She agreed to direct.

You don't know the fucking enormity of what we're dealing with here.

In four years, Jordan has grown the company he founded from a promising upstart into a top local theatrical ticket, with such recent challenging productions as Frozen and The Grey Zone. Each has been staged in a different borrowed space. Bug nests in the torn-up second-floor Oakland space that until recently housed classic rock 'n' roll dive The Upstage. During rehearsal, water gurgles in the exposed plumbing over Agnes' room -- the show's paneled and carpeted single set, its lone table covered with cans of bug spray.

They needed lab rats to test it, and they found us ...

I don't believe my presence here is accidental.

Its thriller structure notwithstanding, Bug's emotional core is a desperate love story, and Cochran says she understands Agnes better than when she first played her. "You just become aware of all the alienation there is in the world," Cochran says -- and of how people enter dysfunctional relationships out of pure need. "You'll leap off a building for someone you love."

Put it together. The pieces fit.

Cochran says our culture is even more suspicious than when Letts (a friend of hers) wrote Bug. Aside from nightmarish government plots, the paranoia here involves a stolen child, same-sex-couple child-custody, insect egg sacs and the perfectly reasonable explanations people in power give for unreasonable phenomena. New threats -- possible, imagined, certain -- keep bubbling to the surface. As in conspiracy classic The Manchurian Candidate, there's a queen (but she's not red). Just because Peter's paranoid doesn't mean they're not out to get him. And what would be crazier: If his scenario were true, or if it were not?

For Jordan, it's all proof that "[t]heater can still have that grab you by the balls kind of thing."

If we don't open the door, then they'll know we know.