Parade at University of Pittsburgh Stages 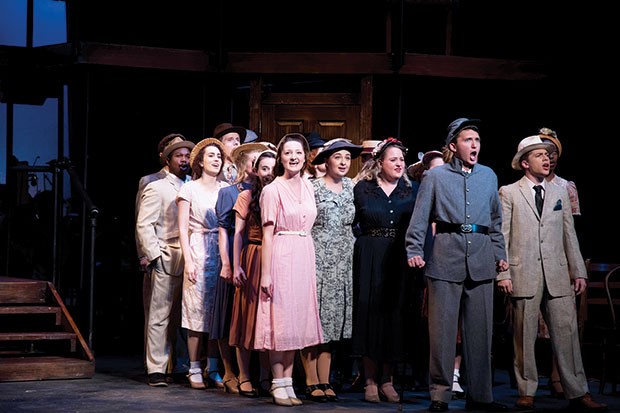 Photo courtesy of Samantha Caun Photography
The cast of Parade, at University of Pittsburgh Stages

Parade is a wonderful play to listen to, but a tough play to watch. This 1998 musical (book by Alfred Uhry; music and lyrics by Jason Robert Brown) tells the story of the notorious 1913 Leo Frank trial, in which a Jewish factory manager was falsely accused of raping and murdering a 13-year-old girl in Atlanta. The case is credited with the launch of the Anti-Defamation League, as well as, paradoxically, the resurgence of the Ku Klux Klan. This becomes very weighty material to sing and dance to.

Fortunately, University of Pittsburgh Stages does an excellent job of bringing this former Broadway show to life. Directed by Rob Frankenberry, and backed by the superb University Symphony Orchestra led by Roger Zahab, the two-and-a-half-hour production exudes energy, tight pacing, and professionalism.

Dan Mayhak is brilliantly cast as the doomed Leo, who, in an ironic twist to white privilege, is framed for the murder, as hanging a black man “ain’t enough this time. We gotta do better.” Mayhak’s voice has the sensitivity of a violin played in darkness, and where most performers would be happy to achieve a gray and narrow range of pathos, he evokes a rainbow.

Brittany Bara’s portrayal of Leo’s wife, Lucille, grows more subtle as their relationship deepens during the shameful investigation and trial. You can hear the profound love for her husband evolve in her delivery.

The large ensemble company is consistently strong. Among the talented vocalists are Alex Knapp, as the corrupt prosecuting attorney Hugh Dorsey; William Banks as suspect Newt Lee; and Tru Verret-Flemming as Jim Conley, the shady janitor whose fabricated testimony ultimately condemns Leo. His rendition of “Blues: Feel the Rain Fall” is a highlight of the show.

Gianni Downs’ minimalist set allows the action to progress from dialogue to song to dance with fluidity. KJ Gilmer’s costumes, Megan Bresser’s lighting, and Kate Devlin Metz’s projections are all understated and effective.

The wings of the stage are filled with townspeople who look over the events like a complicit Greek chorus. But by the end, they are directly facing the audience. As if Leo’s fate is something even they cannot bear to watch.

Furries and Pittsburgh: a timeline