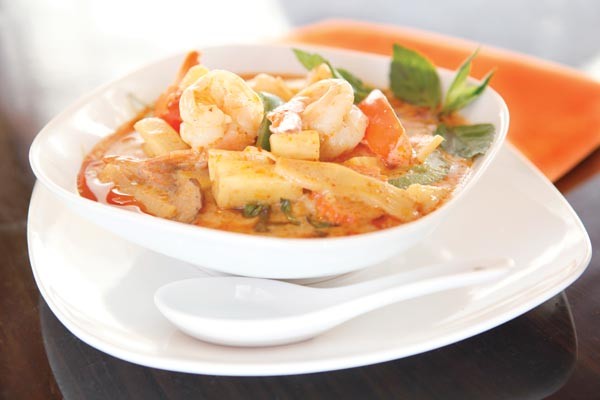 The Pointe at North Fayette is a dizzying jumble of retailers, mostly of the national-chain persuasion. But when we heard about a local Thai place holding its own among the standard-issue burgers and heaping plates of pasta, we set out to investigate.

Suburban strip malls serving as incubators for immigrant-run ethnic restaurants is old news by now, but we were still a bit surprised that a venturesome little business had taken hold in such a massive phalanx of national retail.

And indeed, Papaya is more than an ethnic hole in the wall. The space is large and betrays a considerable, though not extravagant, decorating budget. It has a liquor bar, a sushi bar and flattering lighting. All this formed a pleasant first impression, especially combined with the warm, almost effusive, welcome we received from the host. Service at Papaya continued to be excellent throughout our meal. Our original server was that rare combination of being attentive without hovering or interrupting, and when she was dragooned into serving a large party that arrived after us, her substitute didn't miss a beat.

Papaya offers a fairly typical Thai menu, augmented by sushi and a few generic Chinese dishes for the non-Thai-curious. The selection may have erred more on the side of reliability than excitement, but the presentations showed that the kitchen was as committed as the front-of-house staff to making an impression. Our fried-tofu triangles were plated just so on a bed of shredded vegetables. The dipping sauces were served in attractive, distinctive little bowls, and the sushi was arranged and garnished with geometric precision.

Fried tofu is a dish easily marred by a too-coarse coating, and Papaya's looked fairly rustic. But the first bite dispelled any concerns about texture and rewarded our palates with salutary flavor. The crust was crisp, tending toward crunchy, but without any toughness, and the tofu within was silken, almost creamy. Both a satay-style peanut sauce and a finely minced cucumber salad added intriguing notes of sweetness, spice and vegetal freshness to the well-done, but inherently bland, tofu.

Following a welcome trend that seems increasingly widespread, the spicy calamari consisted primarily of large pieces, not mere rings, which allowed for additional crunchy breading without overwhelming the meat within. Interestingly, the heat came by way of a garlic-chili dipping sauce, rather than any spices in the breading itself.

The sushi we tried, classic tuna nigiri (maguro) and salmon roll, were satisfactory, if not extraordinary. The salmon roll was modest and simple, but we appreciated the inclusion of sliced avocado in the roll, adding color and texture while boosting the oily richness of the fish.

Pad Thai we had more mixed feelings about. While everything about it seemed correct — well-cooked noodles, good proportions of vegetables, tender chicken — its flavor profile listed to the sweet, as if there were too much sugar in the tamarind sauce, unbalanced by hot and sour notes in the other ingredients. Pad Thai may be mild, but it needn't be without complexity, or even bite, and we found ourselves wishing for more red pepper flakes to sprinkle and fresh lime to squeeze over this dish.

Jason was happier with his spicy basil soft-shell crab, especially the plentiful, flash-cooked basil leaves that were subtler than raw leaves but still added plenty of peppery flavor. The crab itself was fried tempura-style, the crisp exterior providing a crunch that the crab's shell could not. If there was a quibble, it was that the same stereotypically Asian vegetable medley — carrots, peppers, those miniature ears of baby corn — appeared both in this dish and in Angelique's beef panang curry: It was as if the kitchen could not be bothered to develop a custom vegetable combination for each recipe. The curry, while pleasantly fragrant and perfectly enjoyable, also seemed to lack a distinctive flavor of its own. Of the traditional Thai curries, panang tends to be on the subtler end of the spectrum, but the alchemy of herbs and spices here was perhaps a bit too subtle. However, it did allow the robust flavor and tender texture of Papaya's beef to shine.

Like a good curry, a restaurant's appeal depends upon a complex calculus of many ingredients. Not the least of these is context. While we might not bypass our favorite Thai dining spots in the city in a headlong rush to Papaya, it did provide an oasis of locally owned, non-corporate, perfectly pleasant dining in one of the places we least expected it.