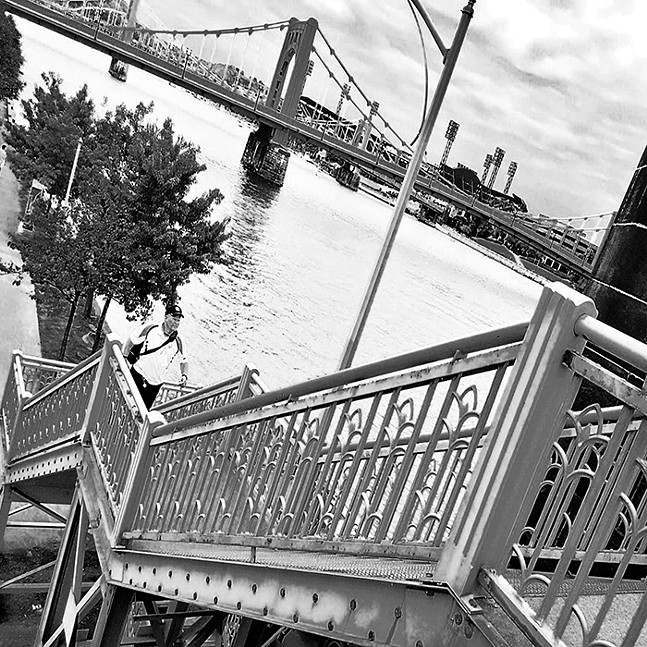 Photo: Paola Corso
Steps leading up to the Rachel Carson Bridge, connecting Downtown Pittsburgh to the North Side
Every time Paola Corso’s grandmother saw a church, she made the sign of the cross. Corso adopted her grandmother’s tradition when she crossed a bridge over one of the three rivers in Pittsburgh: “In the name of the Allegheny, the Monongahela, and the holy Ohio, amen," became Corso’s personal prayer.

In Vertical Bridges (Six Gallery Press), a new collection of poems and photos, Corso brings a similar reverence to one of Pittsburgh’s hidden landmarks: the steps that connect city neighborhoods.

“I think it certainly highlights and builds on what we are growing to recognize as a gem of our city, as well as our bridges and rivers,” Corso says of the steps featured in her collection of poems, and personal and archival photographs.

Corso sees the confluence of rivers as sacred ground and says “steps are what connected the sacred ground of the river valley up to the hills, where workers eventually had to move to when factories filled in at the base.” 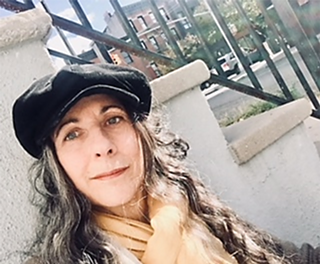 Author Paola Corso
Citing Bob Regan’s Pittsburgh Steps: The Story of the City’s Public Stairways as an inspiration, Corso explores how steps act as gateways to other places. The poem “Ode to Bob Regan” pays tribute to the man who “uncovered these steps in places we didn’t even know they existed,” Corso says.

But Bob is / even he is ruly / and he develops / for the first time / ever the counting / plotting, mapping / and photo snapping / of every stairway / in the city.

Those steps are part of a network of approximately 750 public staircases on the South Side, Troy Hill, the North Side, and almost any other place in the city where there is even the hint of a hill.

Corso became interested in steps after moving back to Pittsburgh a few years after living in New York City. She took her sons to a volunteer clean-up of steps in Troy Hill. With a trash bag in hand, looking at the city from Troy Hill, inspiration struck. “I saw a stage,” Corso says. “Not steps, but theater seats. I really thought this was a performance space, and we had 739 of them all over the city.”

In 2016, Corso co-founded Steppin’ Stanzas with poet Andrew Edwards. Featuring musicians, poets, and even a belly dancer performing on city steps, Steppin’ Stanzas became a conduit for Corso’s fascination with city steps, with most of the poems in Vertical Bridges culled from that project.

She also started researching steps from other parts of the world, including India, China, Italy, and Norway. Corso found that steps are not only utilitarian structures, but symbolic in nature. 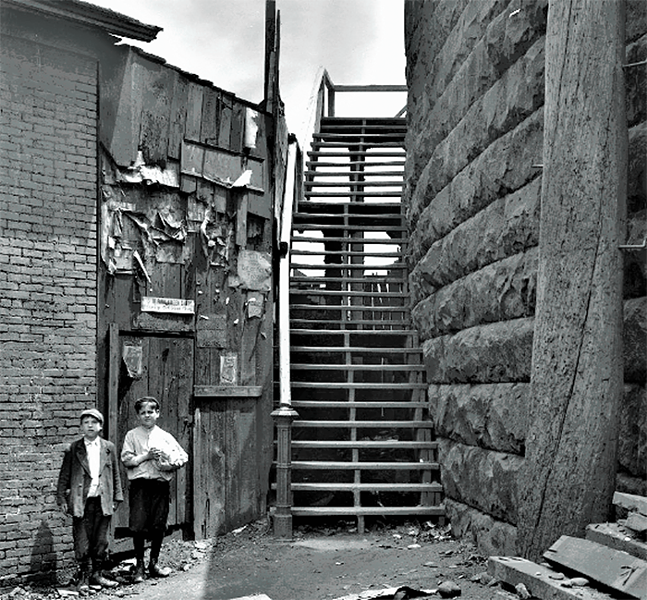 Photo: Pittsburgh City Photographer Collection, 1901-2002 from the Archives and Special Collections at the University of Pittsburgh Library
1913 photo of the 28th Street Bridge steps in the Strip District
“There’s the spiritual facet as a way to a higher place that’s going to take us closer to the heavens,” Corso says. “They are a political symbol, a hierarchy with the have-nots at the bottom and, at the top, you have the very powerful. I also thought in terms of the historical in tracking these incremental changes that take place over time.”

There’s also a personal connection. Corso calls herself a “riser that’s combining the two treads” as the daughter of immigrants who connects her family history to her sons. But it wasn’t until a few years ago, when Corso was walking around her father’s old homestead in Brackenridge that overlooked a steel mill that was once an Allegheny Ludlum plant, that the personal connection took root.

As she walked, a path of broken stones was revealed from a pile of leaves. A connection that had been buried for years was now in front of her.

“These steps were built for steelworkers like my father and grandfather, who were both crane operators,” Corso says. “They were built so they could climb up and down so they could punch in. … It was such an epiphany for me. What I had processed and internalized on an artistic level, I saw on that day as a personal thing for me.”