Fifty years is a long time, especially in the famously fickle restaurant business. Having eaten at literally hundreds of local establishments, we've become accustomed to seeing places where we've dined shut down. What's a lot more impressive is walking in the door of a restaurant that's been open for longer than we've been alive.

We believe the technical name for such an establishment is institution, and Palmieri's, a venerable family-owned Italian restaurant in Turtle Creek, is just that. The restaurant was opened in 1956 by Antonio and Maria Palmieri, a couple whose personal history inspires at least as much awe as the longevity of their business. Married at 18 in their hometown in Italy, separated for nine years by World War II, then reunited in the steel towns of Western Pennsylvania, the Palmieris' first storefront was a stone's throw from the Westinghouse Airbrake plant, in Turtle Creek.

Business was brisk, but by the 1970s, the local economy, along with small-town downtowns across the country, was in decline. In an effort to compete with the booming suburbs, the local redevelopment authority replaced a block of downtown Turtle Creek with "Penn Plaza," a suburban-style strip mall. In it was a new, larger space for Palmieri's, which family members finished with their own hands, laying marble floors, brick arches and plaster walls reminiscent of the old country they had left behind.

And it hasn't changed an iota since.

Our family squeezed into a booth that was really too small for us, just for the privilege of sitting beneath the wrought-iron grape-arbor trellis. Here, the adults in our party succumbed to visceral memories of eating out in "nice" restaurants with our parents when we were children. (Shirley Temple, anyone?) Now we watched our own bambini tear into cellophane-wrapped captain's wafers and maraschino cherries.

Fortunately, the menu we perused wasn't quite as fixed as the décor. While the recipe for Palmieri's calf's liver may date from 1956, as might an entire menu section devoted to eight preparations for veal, we're pretty sure that the buffalo chicken pizza is a more recent innovation.

And, while the restaurant's distinctly old-school vibe led us to expect a correspondingly old-school salad of iceberg lettuce and shredded carrot, we were pleasantly surprised to receive thoroughly modern bowls of mixed greens studded with sliced cucumber and olive. The house dressing (Italian, of course) was a peppery vinaigrette with a bit of body, while the house-made bleu cheese dressing was creamy yet full of tangy crumbled cheese.

An appetizer of baked asiago cheese over roasted red peppers was a great success, featuring a floe of salty, chewy melted cheese that played deliciously off its bed of tender, sweet peppers. Bagna cauda, a Piedmontese olive-oil dip, consisted of garlic and anchovies gently cooked in a large portion of olive oil, such that the bold ingredients gave up their harshest notes to infuse the oil with mellow flavors of fish and garlic. This dish is rare in local restaurants, and our server said we were the first people she'd ever served it to at Palmieri's. We thought it was excellent and deserving of greater popularity. Palmieri's old-fashioned Italian bread -- lightly crusted and fluffy within -- was a good match, but we wished for something more artisanal and chewy.

The entrée list was long, bordering on epic, with umpteen varieties of steak, seafood, meat, poultry, pasta and pizza to choose from. Jason opted for the broiled-seafood platter and experienced, in this one dish a variety of presentations: flavorless filet of sole and scallops; a serviceable crabcake reminiscent of what is sold in tinfoil shells at delis; and marvelous langostino clams that reminded him of why this little crustacean is sometimes compared to lobster. Some more seasoning -- garlic, in particular -- would have gone a long way toward making the whole platter worthwhile.

A side dish of vermicelli was perfectly cooked -- not always the case with these thin noodles, especially in small portions -- and the marinara tasted of bright tomatoes that had not spent too much time in the pot. The meatball was well flavored with herbs and not too dense, but it lacked the delicate texture and subtle meatiness of a really excellent specimen.

Angelique is a fool for lobster ravioli, which was offered as a special. They were briny and toothsome, though the ho-hum red-pepper cream sauce in which they were served struck her as more obligatory than complementary.

Palmieri's is a genuinely old-school restaurant which still trades, successfully, on the dining traditions -- and dishes -- of our parents' generation. Its best dishes hold their own against contemporary upstarts, and its atmosphere is its own treat. 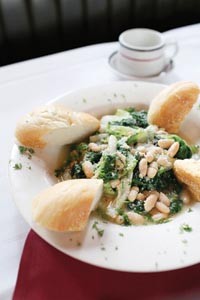