Tapas fare was a long time coming to Pittsburgh, but when it finally did arrive — over a decade ago now — we turned out to have a big appetite for small plates. Well suited to late-night socializing, snacking and drinking at a level decidedly more sophisticated than pub grub, the concept of sampler-size portions caught on fast. Authentic, Spanish-style tapas restaurants have come and gone, but small plates have become a durable phenomenon of their own. Sometimes, they are synonymous with appetizers, other times adapted to a variety of cuisines.

Pallantia brings tapas firmly back into the culture and context of Iberia. Opened by Spanish native Gonzalo Cembrero, who first came to Pittsburgh 20 years ago as an exchange student, Pallantia recently relocated from Greensburg to a former pizzeria just off Walnut Street in Shadyside.

The old Village Pizza space has been utterly transformed and seemingly magically enlarged. The vibe is sleekly minimalist, with plaster arches defining dining niches while evoking wine-cellar catacombs; each niche is papered with a wall-size photograph of a scene from Spain, such as a castle or the running of the bulls. Another wall is paved with hand-painted Spanish tiles. The effect is not just decorative, but immersive. 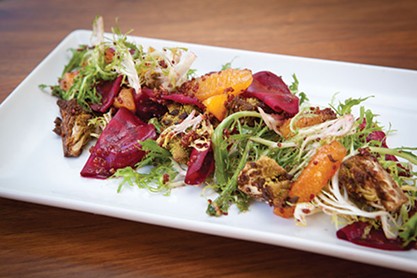 So is the menu. At a single page, it is strictly authentic, with hot and cold tapas, a couple of cheese platters (with or without cured meats), and paella, served in the traditional iron skillet for sharing among two, three or more table-mates.

The tabla de queso y embutidos — cheese and meat board — featured a well-balanced selection of imported Spanish cold cuts, as well as dabs of condiment and a scattered few crackers and toasts. Of the meats, Iberico ham and dried chorizo were excellent, but the standout was lomo, tender cured pork loin that had some of the red tinge of capicola, but was subtler and had more interesting spicing. Alongside the savory meats and salty, milky Mahon Menorca cheese, we liked the Cabrales, a sharp blue cheese, drizzled with honey.

Chorizo returned in a salad with garbanzo beans, as well as tiny, halved tomatoes, baby lettuce, cilantro and croutons. This salad was just barely dressed, the better to foreground the interplay of spicy, almost chewy sausage and earthy, creamy legumes.

Hamburguesitas — essentially, hamburger sliders — reflect the globalization of Spanish cuisine. Pallantia’s were small, savory and richly flavorful. It may seem a far-fetched claim, especially in the era of the gourmet burger, but we would go so far as to assert that Pittsburgh’s most authentic tapas restaurant also serves one of its very best burgers: juicy, charred, not crumbly, and satisfyingly topped with nutty, not-too-sharp manchego cheese, Serrano ham and sofrito aioli. Crispy, well-browned, housemade potato chips were superb, as well.

Click to View 9 slides
The dozen or so other hot tapas selections were various and tempting. They included lamb meatballs in saffron garbanzo purée; roasted Cornish hen with hen-of-the-woods mushrooms and lentils; Prince Edward Island mussels in tomato broth with Brussels sprout leaves and shallots; a Serrano ham and manchego cheese sandwich; and a few substantial vegetarian options, from peppers to potatoes.

But we needed to save room for Spain’s signature dish, and Pallantia’s only non-tapas option: paella.

In keeping with the rigorous authenticity of the rest of the menu, this was a strictly traditional version, comprised of Valencia rice, saffron and five forms of shellfish: clams, mussels, shrimp, scallops and calamari. These tended toward the firm, rather than the succulent, with baby octopus almost frizzled, but none of it was dry or fishy-tasting. More importantly, the rice that held these ingredients in unison was impeccable. The long-simmered seafood stock in which it was cooked infused each moist, perfectly tender grain with an intense, yet clean, flavor that more than made up for any shortcomings of the shellfish. And then, a defining aspect of paella is the thin crust developed by the rice in contact with the pan, and never have we had such a delightful version of it as here.

Tapas are made for savoring and socializing, and so is Pallantia. Small plates are everywhere, but such authentically wonderful Spanish tapas cannot be had anywhere else in Pittsburgh.