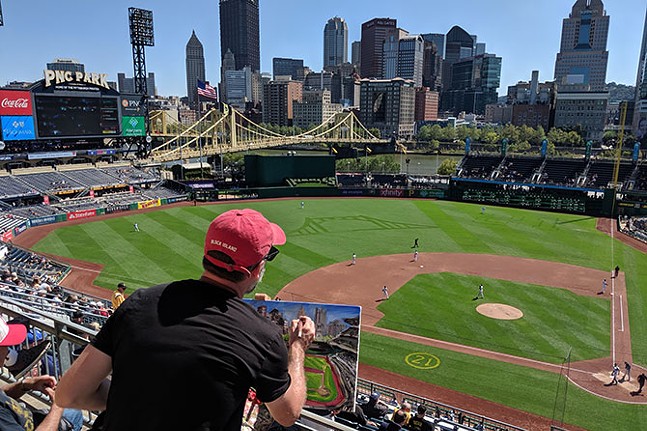 PNC Park, Pittsburgh's baseball stadium on the banks of the Allegheny River on the North Side, has gotten accolades worldwide for its beautiful view of the Downtown skyline just beyond the outfield.

On Thursday afternoon, as the Pittsburgh Pirates face off against the Seattle Mariners on a beautiful 73-degree day, artist Andy Brown is putting the view on canvas: the sky, bright blue without a cloud in sight; the field, a brilliant green; and that gorgeous Pittsburgh skyline, shining brightly in the background of the artwork.

Brown, an artist from England, is traveling across the country, documenting all 30 MLB ballparks on canvas. Today's visit to Pittsburgh marks his 27th stadium as part of this year's "Diamonds on Canvas: The Art of Baseball" series.

It's not his first trip to the Steel City. His website showcases an impressive display of artwork from his five years commemorating ballparks from all over the world. Just last year, he painted live during 67 games in four different countries, including PNC Park last August.

After this year's series is complete, Brown plans to exhibit all 30 paintings in Cooperstown. "My paintings — and the process of me actively painting during the game — has always attracted a huge amount of attention," he writes on his website, "giving enjoyment to the fans, players, and all involved."

The crowd today is thin but in good spirits, after a difficult season at the ballpark. Just earlier this week, pitcher Felipe Vazquez was arrested on charges of solicitation with a minor, and the team is having a less than stellar season. But today, on the third level of the stadium, just above third base, Pittsburgh's ballpark looks pretty damn great.