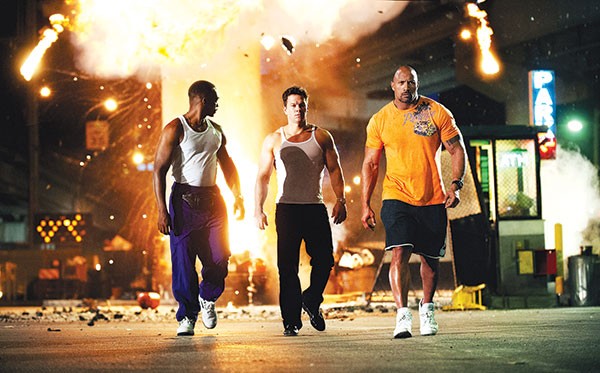 In the opening monologue of Michael Bay's Pain & Gain, Daniel Lugo (Mark Wahlberg) lays out his philosophy about making it. It's vaguely related to his job — he's a muscle-head who works as a personal trainer at a Miami gym, and he believes in doing the reps. America, after all, started out as "13 scrawny colonies," before getting pumped up into a dominant nation.

But Lugo decides his straightaway to the American Dream is simply to jack somebody else's. He's got an obnoxious gym client (Tony Shalhoub) who won't stop braying about his wealth, and Lugo figures: Why not just kidnap him, get him to sign over his assorted goodies, and bam! Dream achieved!

Lugo ropes in two buddies, a gym rat (Anthony Mackie) and an ex-con-turned-to-Jesus (Dwayne Johnson). Unfortunately, neither man is any smarter than the dim Lugo, and though the mark is successfully kidnapped, the plan begins to fall apart, undone by careless details.

Since we know how the film ends — it's based on a true story from the mid-1990s that you may recall, plus Bay opens with Lugo being apprehended by the cops — its pleasures rely on how the tale is told. This is a mixed bag: The three leads are entertaining enough actors (with the edge going to Johnson, particularly once his character goes off the rails), but man, does this film feel bloated. It's well over two hours in length, and even though Bay has turned down his trademark bombast and action, he seems to have filled that hole with plenty of foot-dragging. (There's some literal foot-dragging as well, but most of the body parts on display are fake boobs and he-man chests.)

Pain & Gain should be a dark comedy, but Bay plays it like a romp (though not quite as kicky as the trailer would have you believe). It's self-aware of the absurd source material — a title even appears on screen during a bizarre scene saying "this is still a true story" — yet fails to convert that knowledge into anything edgy or insightful.

There's some unintended irony here. Bay wants to say something critical (I think) about the hollowness of shortcutting one's way to the trappings of success (big house, fancy boat). But he relies on one of our laziest cultural signifiers — the thoughtless comic-action movie, blinged out with rap and slo-mo on the surface, but still empty inside.