Clowns: Whether you find them passé or just plain terrifying, you have to admit there's something about a grown man with a rubber nose that demands a strong reaction.

And Pittsburgh Opera's production of a piece of seminal clown theater, Leoncavallo's Pagliacci, gets just such a reaction: pure bliss.

Tenor Richard Leech is a marvel. He gives -- by far -- the best operatic performance to grace a Pittsburgh stage in at least five years. This is the kind of red-blooded romantic singing that one expects at the Met or La Scala, not the freakin' Benedum.

I shudder to think of the truckloads of cash the opera must have shelled out to get the internationally renowned Leech to open its 68th season. But whatever it cost, it was worth it.

Perhaps that very drain in greenbacks helps explain the short shrift given to actual opera on the stage. Since time immemorial, Pagliacci has been coupled with another short opera, usually Mascagni's Cavalleria Rusticana. At an hour and 35 minutes (counting a 25-minute intermission!), Leoncavallo's masterpiece alone doesn't provide much bang for the buck. Regardless of the exceptional quality of the performance, one is left hungry for more. It's like a delicious filet mignon -- queen cut and a la carte.

Artistic Director Christopher Hahn explains that the company is following the example of the great stage and screen director Franco Zeffirelli in presenting the work alone, unmuddied by its companion piece. And, to be fair, there is something to be gained from seeing the work alone. However, a nice drink at the bar during a 30-minute intermission would have given me time to reflect before beginning my second melodious course.

And why have an intermission in Pagliacci at all? You lose too much tension between the glorious tragedy of the famous "Vesti la Giubba" aria and the intermezzo. Lord knows there have been plenty of operas that could use an intermission (Wagner's Flying Dutchman comes to mind). But even a teenager can sit still for less than the time it takes to watch Toy Story 2!

However, I'm nit-picking. And speaking of "Vesti la Giubba," Leech's performance is so incredible, you almost forget this is the great Enrico Caruso's signature tune. Every second he's on stage (and you can almost measure it in seconds), you simply thank the Fates that you somehow managed to witness operatic nirvana.

That's not to say the rest of the cast is second-rate. The other two members of the story's love triangle are outstanding as well -- even if they're somewhat dimmed in comparison to the supernova of the opera's namesake.

Baritone Lester Lynch starts the story off right with a heartfelt prologue before switching gears to the villainous, at-times comedic Tonio. Lynch's strong, dark voice and excellent acting chops hold everything together. Without him, the show just wouldn't work dramatically.

Soprano Mary Mills takes a little time to warm up, but once those pipes are humming, she shines in the role of Pagliaccio's wife, Nedda. Her creamy vocalism conveys both hot-tempered passion and vulnerability.

Conductor Richard Buckley does an even better job with the orchestra than he did with last season's Rigoletto, bringing out just the right bumptious comedy as well as the climactic violence. Still, one misses departing music director John Mauceri, who always owned the orchestral accompaniment with such verve.

Perhaps Smokey Robinson and the Miracles were right:

But ain't too much sadder than

The tears of a clown

When there's no one around

Especially when he only cries for about an hour! 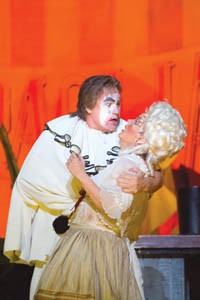