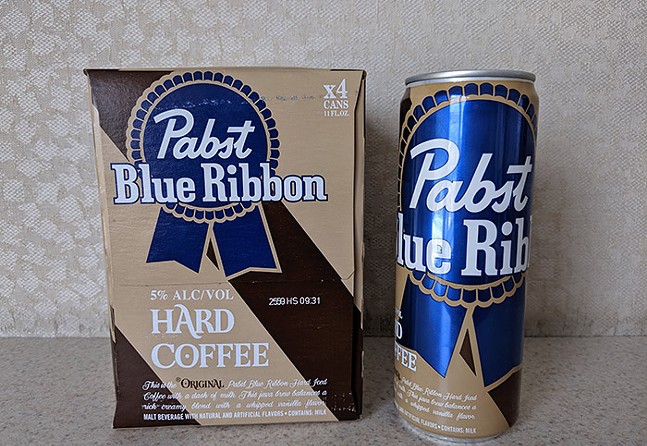 Pabst Blue Ribbon (PBR) is known for lager. The Wisconsin-based brewery’s “premium” brew is many drinkers' cheap beer-of-choice; this year the brewery has even claimed a spot as one of the top 31 most consumed beer brands in the country. But PBR’s latest release has almost nothing to do with beer.

In July, Pabst dropped its newest brew: hard coffee. And while pairing coffee with beer isn’t a new idea (Founders Brewing in Michigan has been making a coffee breakfast stout for over a decade), the hard version is mostly uncharted territory.

Pabst’s hard coffee is a “malt beverage." The brewery makes a malt base and ferments it, then strips the basic spirit of all beer-like qualities, leaving behind a flavorless alcohol. Then, Pabst adds in a coffee made with Arabica and Robusta beans, milk, and vanilla.

The convergence of caffeine and alcohol, however, presents some challenges.

In 2010, The Food and Drug Association cracked down on alcoholic energy drinks (known as the “Four Loko Effect”) for safety reasons. Pabst avoids this caffeine controversy by adding it in naturally —  by way of coffee —  to the drink. One can packs 5 percent ABV and 30 milligrams of caffeine, less than half of the average cup of coffee.

The only words of advice I received before breaking into the four-pack of hard coffee were “don’t drink six at once,” courtesy of the cashier at Liberty Beer. (Apparently, this is a recommendation based on experience; it’s not great on the stomach.)

And after breaking into a can, I was astounded that the concerned cashier was able to drink six in one sitting. The brew, though it tasted nothing like one, is rich and heavy like a stout. It was similar to a canned Starbucks Frappuccino or a Yoo-hoo “chocolate drink”: sweet with an unexplainable metal aftertaste.

For the first few sips, I couldn’t taste any alcohol. It wasn’t until my head started getting a little foggy that I even remembered I was drinking an alcoholic beverage. But by the time it hit, the can started to taste like the bottom sips of a coffee cup.

Finding a good time to drink hard coffee is still up for debate. If you’re a die-hard for breakfast beer, PBR hard coffee might be a great stand-in. But if you’re like me and drinking before 10 a.m. feels exhausting, it’s a great way to, as La Columbe markets its hard coffee, “rally like a grown up.”