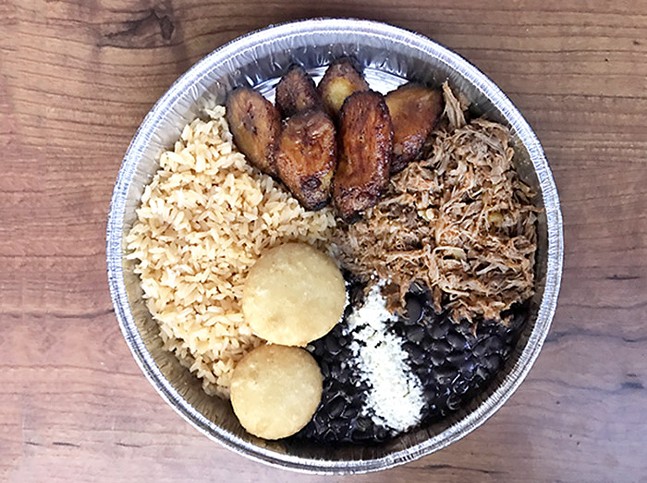 CP Photos: Ryan Deto
Pabellón criollo bowl
Some might assume that cuisine from South America is too exotic or adventurous for Pittsburgh palates, but Pabellón, a popular Venezuelan restaurant in Banksville, shows just how comforting and approachable the food can be. Fried yucca are similar to Pittsburgh’s beloved french fries, arepa cakes are like cornbread, and the pabellón criollo should be easily embraced by yinzers.

Pabellón criollo is a traditional Venezuelan dish that combines rice and beans with stewed, shredded beef. The dish is commonly served with fried plantain slices, and/or a fried egg.

At Pabellón Venezuelan & Mexican Cuisine, the South American staple doesn't disappoint. I ordered the pabellón criollo and a slew of appetizers and side dishes to compare how the restaurant’s Venezuelan fare stacked up to others I have had in the past. It met and exceeded my expectations.

The pabellón criollo was the star of the meal. The meat had an incredible beefy flavor, like a slow cooked pot roast with just enough pepper and spice. The flavor is similar to a high-quality beef jerky, but it's as succulent as ever. Just dip a fork in.

The rice that accompanied it was flavorful on its own, but not overpowering. The same with the black beans. Both added necessary moisture and texture to the dish; rice and beans are a tried and tested meal for a reason.

While it looks a bit like a burrito bowl, it differs in the subtle flavor of the rice and the addition of fried plantains, which added some caramel sweetness anytime the dish felt too rich. Also, any remaining juices can be mopped up with slightly sweet and spongy arepa cakes.

CP Photos: Ryan Deto
Venezuelan appetizer sampler platter
It’s hard to imagine Pittsburghers not enjoying Pabellón’s fried yucca, which is just crispy enough on the edges, with the perfect amount of fluffiness in the middle. Like a hearty french fry, but very approachable. They mix well with the sour cream sauce provided in the Venezuelan Mix platter.

Other items in the platter included empanadas, tequeños, arepas, and tostones. The tostones — which are twice-fried plantain slices — are a touch sweet, crispy, and dense, but balanced well with a salty cheese and rich pink sauce called salsa rosada.

I am very confident that Pittsburghers will love the tequeños. They are a buttery, soft pastry — similar to crescent rolls — filled with salty, melty mozzarella cheese. They’re very rich, but when dipped in the spicy guasacaca green avocado-based sauce, a perfect balance is achieved.

I washed the entire meal down with a juice from the guanabana, aka soursop, a tropical fruit that tastes like a sour, creamy apple. It was delightfully sour and perfect on a hot summer night. It tasted almost like a ready-made mocktail.

All in all, Pabellón is a very approachable restaurant that provides Pittsburgh with some unique dishes. It’s a great place to dip your toe into the world of South American cuisine, which isn’t as different from North American food as one might assume.
Pabellón Venezuelan & Mexican Cuisine. 2957 Banksville Road, Banksville. pabellonpgh.com