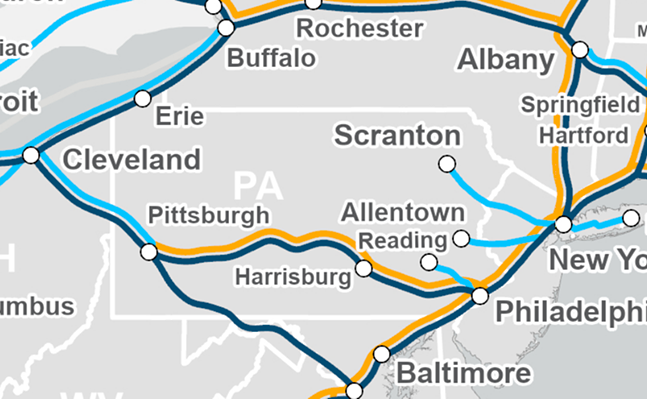 Image courtesy of Amtrak
Proposed Amtrak routes in Pennsylvania as part of its Vision 2035 plan. Dark blue is existing service, orange is enhanced service, and light blue is new service.
On March 31, passenger train provider Amtrak released its 2035 Vision plan to expand and improve rail service throughout America, including more than 30 new routes and improving service on more than 20 existing routes.

And Pennsylvania is getting a lot of train attention, particularly the eastern half of the commonwealth, and the Pittsburgh area would also see new routes and expanded service, too.

Broad goals of the plan state that up to 160 new communities would see passenger rail, and 15 more states would see multiple daily trips. Of those, three new routes would serve Pennsylvania cities that currently don’t have any train service: Scranton and Allentown would connect to New York City, and Reading would connect to Philadelphia.

Pittsburgh would see a new connection to Cleveland, and Erie would see another connection on a route that appears to circle Lake Erie and connect Detroit to Toronto and Buffalo. Currently, there is one train a day from Pittsburgh to Cleveland — as part of the Capitol Limited route from Washington, D.C. to Chicago — but it leaves at midnight and arrives at 3 a.m.

The one Pittsburgh route not seeing any changes is the Capitol Limited, which travels through Pittsburgh from Chicago to Washington, D.C.

Amtrak hasn’t divulged exact stops in between each route, but the inclusion of several new routes in Eastern Pennsylvania would correspond to population growth currently occurring in the Poconos and the Lehigh Valley. And though Western Pennsylvania isn’t seeing much population growth, more trains traveling from Pittsburgh through towns like Altoona, Greensburg, and Johnstown would boost the economies of those struggling places.

Without additional federal funds dedicated to passenger rail, Pennsylvania has been flirting with expanding rail service for years, but has failed to do so.

Amtrak’s announcement comes on the heels of President Joe Biden’s visit to Pittsburgh, where he unveiled his $2 trillion infrastructure plan. The president’s plan includes a proposal for $80 billion in passenger rail funding. According to Yonah Freemark of the Urban Institute, Amtrak has previously said their proposal will cost about $25 billion, but it’s unclear if that includes capital costs.

And the passenger rail provider is bullish on Biden’s proposal saying in a statement that if Congress provides the funding proposed in Biden’s plan, then Amtrak would be able to make necessary improvements, improve trip times, and expand rail service.

“President Biden’s infrastructure plan is what this nation has been waiting for. Amtrak must rebuild and improve the Northeast Corridor, our National Network and expand our service to more of America,” says Amtrak CEO Bill Flynn in a press release. “ ... Amtrak has a bold vision to bring energy-efficient, world-class intercity rail service to up to 160 new communities across the nation, as we also invest in our fleet and stations across the U.S.”