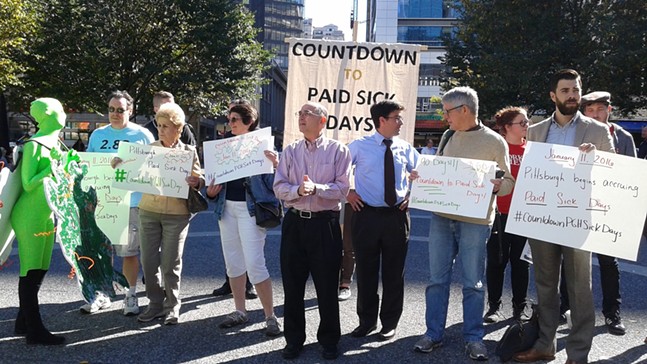 CP Photo: Ashley Murray
Organizers gathered in 2015 to prepare for city's paid-sick-leave law to go into effect.
Most private employers within the city limits Pittsburgh are now required to provide some paid sick days to all of their workers.

That ordinance was challenged in court by the Pennsylvania Restaurant & Lodging Association and several Pittsburgh businesses including Church Brew Works, the Modern Cafe and Rita’s Italian Ice. The case took years to get to the state's Supreme Court.

According to the Pennsylvania Capital-Star, the court ruled 4-3 to uphold the ordinance with the majority finding Pittsburgh officials have the “express statutory authority to legislate in furtherance of disease control and prevention.” Full ruling can be read here.

Justice David N. Wecht, a Democrat wrote for the majority of the ruling, was joined by three other Democrats. The two Republicans on the court dissented and were joined by Democratic Justice Max Baer. The dissenters disagreed with the argument that paid sick days would further the cause of disease control and prevention.


This is not a win for politicians. This is a win for workers fighting for economic justice.

Pittsburgh Mayor Bill Peduto and city councilors are celebrating the decision. According to the ordinance about 40 percent of Pittsburgh’s private sector workers don't have access to paid sick time, including about 77 percent of service workers.

“Guaranteeing paid sick leave is a huge win for those who live and work in Pittsburgh,” said Peduto in a statement. “As I’ve long said, people should not be forced into making the tough decision between staying home sick and missing a day’s pay or coming in to work and spreading infection.”

O’Connor called this ruling “historic” not only for Pittsburgh, but noted this could have huge implications for other Pennsylvania municipalities. Pittsburgh is a Second Class city under Pennsylvania's constitution, and like many other municipalities in the commonwealth, lacks as much autonomy on local laws as Philadelphia, a First Class city.

“Pittsburgh's leadership on this issue has shown a path forward for other cities to enact their own paid sick day benefits,” said O’Connor in a statement. “This is not a win for politicians. This is a win for workers fighting for economic justice.”


Cannot overstate what a win this is, but this isn't the end. I'll fight to preserve and protect #paidsickleave for all workers because no one should have to fear losing their job or needed wages because they get sick. https://t.co/J5Fx7B8ROP