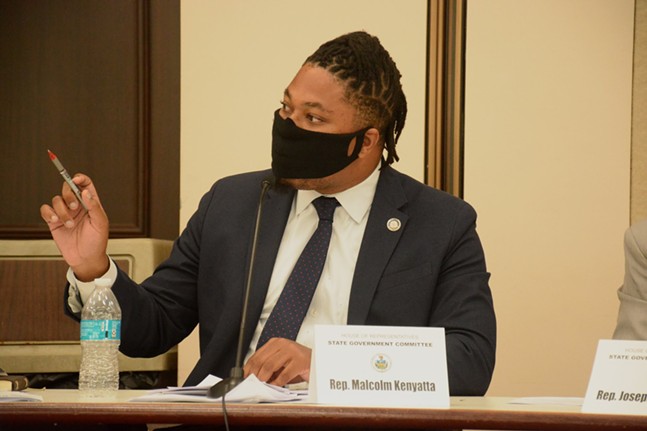 Pennsylvania Capital-Star photo by Stephen Caruso
State Rep. Malcom Kenyatta
State Rep. Malcolm Kenyatta (D-Philadelphia), is running for Pennsylvania’s open U.S. Senate  seat in 2022. The second term lawmaker announced on Thursday that he was jumping into the race to fulfill “America’s promise” for all.

“There is nothing written on a tablet somewhere that America has to succeed” Kenyatta told MSNBC host Joy Reid. He promised a campaign focused on bringing together Black people, young people, and suburbanites skeptical of the Republican Party.

Kenyatta, who is Black and openly gay, will bring diversity to the burgeoning field of contenders, while sharing some of Fetterman’s strengths as a sharp-elbowed social media user and frequent cable TV guest.

First elected in 2018, Kenyatta has attracted attention for viral posts showing his booming oration in the House, touching on such topics as raising the minimum wage and reforming state policing laws, as well as poking holes in claims of election fraud.

In fact, a House GOP committee chair nearly ejected him from a committee meeting last year over the latter.

Kenyatta also endorsed President Joe Biden early on, even stumping for Biden in Iowa, and was featured as a Democratic rising star during the 2020 Democratic National Convention.

Speaking on MSNBC, Kenyatta named raising the minimum wage, student loan relief, and clean energy as top priorities. He added that he had already secured endorsements from the American Federation of Teachers, a union representing educators in many urban school districts such as Philadelphia and Pittsburgh, as well as the Working Families Party, a progressive third party active in Philly city politics.

“This isn’t about a cult of personality, it’s about working people,” Kenyatta said.