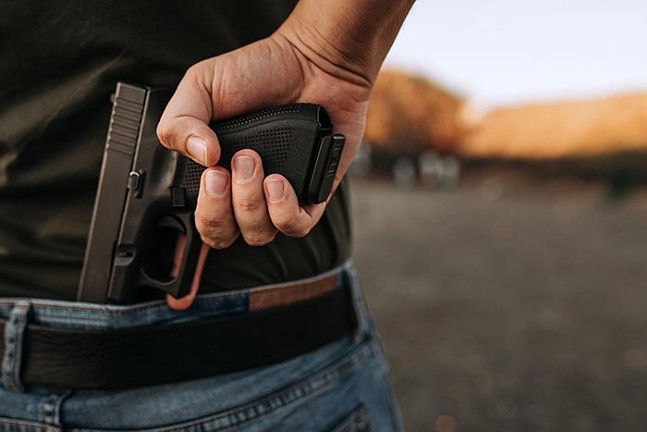 Despite facing an inevitable gubernatorial veto, the Republican-controlled Senate pushed a pair of bills to expand concealed-carry rights and open the door for legal action against Pennsylvania municipalities that enact gun ordinances stricter than state law.

After three hours of debate on Nov. 9, the upper chamber voted 29-21 to approve legislation introduced by Sen. Cris Dush (R-Jefferson) that allows for concealed carry without a permit, lowers the legal age from 21 to 18, and grants open carry in Philadelphia. Lawmakers also voted 31-19 in favor of a bill sponsored by Sen. Wayne Langerholc (R-Clearfield) that lets anyone sue a municipality for enacting firearm regulations more restrictive than existing state law.

Opponents, including Gov. Tom Wolf, legislative Democrats, a series of law enforcement associations, and gun safety advocates, say the “irresponsible” legislation creates risk for Pennsylvania amid increased gun violence. They also worry outside groups, such as the National Rifle Association, will sue municipalities and leave taxpayers to front the cost.

Before the Senate Appropriations Committee advanced Dush’s bill in a party-line vote to the Senate floor, Sen. Vincent Hughes (D-Philadelphia) said the legislation codifies the “wild, wild west” in Pennsylvania.

“Anybody and everybody can carry a firearm as long as it’s covered — concealed — by their coat, sweater, jacket, tucked into the waistband of their pants,” Hughes said. “As long as you can’t see it, it’s fine. Everybody, you can carry.”

Senate Minority Leader Jay Costa (D-Allegheny) said Langerholc’s bill tells every local government across the state: “You have no right to be able to put into place reasonable and responsible ordinances that manage the use of weapons in those communities.”

“The fact of the matter is we don’t have the courage to make the votes that we need to make to protect our own local residents,” Costa said on the floor, adding that the bills will lead to similar incidents such as the 2018 Tree of Life Synagogue shooting in Pittsburgh’s Squirrel Hill neighborhood, which left 11 people dead.

Existing state law prohibits municipalities from circumventing state firearms laws. However, Langerholc said the legislation is necessary because local governing boards, such as those in Philadelphia and Allegheny counties, continue to pass stricter gun ordinances.

“Why are we here?” Langerholc asked on the Senate floor. “Because municipalities aren’t well-versed in [the] laws in this commonwealth? Are we at fault because we don’t adequately convey the laws that we pass in the General Assembly to our municipalities, townships, or counties?”

Dush, who declined to answer questions from Sen. Anthony Williams (D-Philadelphia) on the floor about his bill, has argued that no current license to carry a firearm is currently required for “law-abiding” citizens to open carry in the state.

Before the Nov. 9 vote, Dush said governments do not have rights — individuals do. Government, he added, has responsibilities. But the problem isn’t “just” gun violence, Dush said on the Senate floor.

“The problem is violence,” he said.

He added that children not having role models in their homes is the root of the problem.

“We have put fatherhood out the door,” he said. “We don’t have people teaching disciple to young people.”

Williams, however, argued that some children are without a parent because of gun violence. He also described Dush’s remarks on parenthood as an “affront to many fathers who lost their lives to gun violence.”

Senate Majority Leader Kim Ward (R-Westmoreland) said Dush’s bill is about the Second Amendment. She said it does nothing to remove existing checks people go through when purchasing and carrying a firearm.

“It’s easy to take this issue and blow it up,” Ward said.

Democrats drafted a series of amendments — all of which failed — to each bill, including changes to let political subdivisions regulate guns on municipal-owned properties, allow local regulations to remain in place until the law takes effect. They also proposed universal background checks, safe storage requirements, required training for those looking to purchase a firearm, lost or stolen gun reporting, and suggested repealing the Stand Your Ground Law.

Democrats also have introduced several bills that would enact their amendments proposed on Tuesday sitting in the Senate Judiciary Committee.

“This is a move to lower the bar for unvetted, permitless people to carry hidden weapons while they walk our streets and mingle in our communities and to dismantle the commonwealth’s system for responsible gun ownership,” Wolf said in a statement ahead of Tuesday’s vote. “We need to stop this nonsense — we should question why we would want anyone who hasn’t undergone a background check to carry a concealed weapon.”

With approval from the Senate, the pair of bills are now in the House of Representatives for consideration.
Marley Parish is a reporter for the Pennsylvania Capital-Star, where this story first appeared.