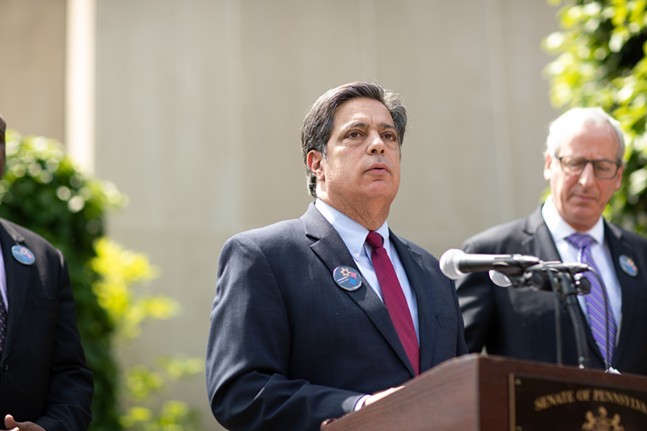 Photo: PA Senate Democratic Caucus
Jay Costa
Following up on a threat made earlier this week, Pennsylvania Senate Democratic lawmakers sued their Republican counterparts to block 17 subpoenas issued this week to begin an investigation of the 2020 presidential election.

The complaint, which was filed the night of Sept. 17 in Commonwealth Court, asks for the state’s judges to block the subpoenas as unconstitutional, claiming that Pennsylvania Senate Republicans are attempting to unlawfully despite the election’s result.

The suit also claims that Republican lawmakers will violate state law if they, as planned, share the personal information of 9 million Pennsylvania voters — such as drivers’ license numbers and partial Social Security numbers — with a private contractor to conduct the investigation.

The state constitution places the “trial and determination” of all election outcomes in the hands of courts.

“The investigation that the Committee seeks to undertake would be tantamount to an election contest and falls outside the authority of the General Assembly to regulate the holding of elections through enactment of legislation,” the suit reads.

This same passage was invoked by Republican leadership after President Donald Trump’s 2020 re-election defeat. Trump invoked baseless claims of fraud, and his hardline GOP supporters in the General Assembly wanted to appoint their own electors, overriding the 3.4 million voters who backed Joe Biden.

Republican leaders, including Senate President Pro Tempore Jake Corman (R-Centre), said that the same article prevented the body from such a move.

In the months since the election, however, Trump has egged on support for a series of election investigations, which he and supporters term as “audits,” to find evidence of his claims, which had been rejected in court and by top members of his own administration.

Pennsylvania Senate Republicans have been creeping towards their own audit since July, when state Sen. Doug Mastriano (R-Franklin) first sent letters to three counties requesting hundreds of thousands of items, including ballots and voting machines.

Mastriano was outside the U.S. Capitol on Jan. 6, when a mob of Trump supporters attempted to block the certification of Biden’s electoral college win.

However, he was relieved as chair of the Senate Intergovernmental Operations Committee, which is running the investigation, after Mastriano publicly questioned Corman’s resolve to conduct the review.

He was replaced by state Sen. Cris Dush (R-Jefferson), another conservative who has questioned the 2020 election result. Dush’s committee issued the subpoenas in a party line 7-4 vote Wednesday.

Dush said he sought the personal identifying information because “there have been questions regarding the validity of – people who have been – who have voted, whether or not they exist.”

He added after the vote that more subpoenas, including for ballots, could be coming.

Senate Democrats said they’d challenge the subpoenas Wednesday. Attorneys for the caucus, as well as Pittsburgh attorney Clifford Levine, who worked for the Biden campaign in 2020, are arguing the case.

“This is nothing more than an inexcusable attempt to erode public trust in our electoral process,” said Democratic members of the committee in a statement, connecting the investigation to Trump’s attempts to undermine his electoral loss.
Stephen Caruso is a reporter at the Pennsylvania Capital-Star, where this story first appeared.