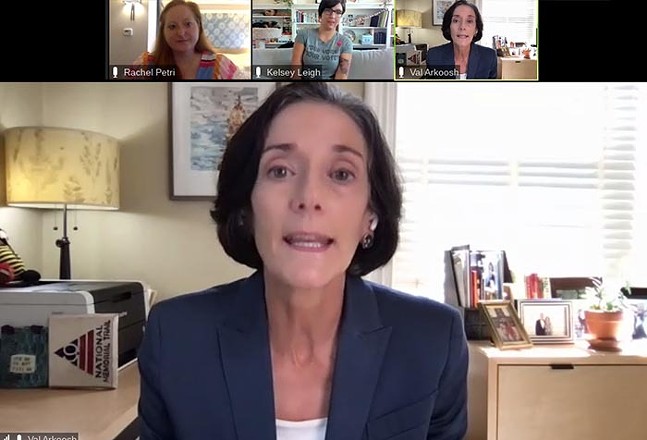 Screenshot from Val Arkoosh's discussion with Pittsburgh
After the U.S. Supreme Court’s decision to not block a six-week abortion ban law in Texas, pro-abortion access advocates are speaking out across the country about the necessity to protect Roe V. Wade, the landmark 7-2 U.S. Supreme Court decision that said the Constitution provides pregnant people access to abortions.

Two of those people are from Pittsburgh, and on Fri., Sept. 3, they held a roundtable with U.S. Senate candidate Val Arkoosh (D-Montgomery) to share their stories. Arkoosh, a physician and Montgomery County commissioner, called on the U.S. Senate to codify Roe V. Wade into federal law, something the U.S. House is currently considering.

Kelsey Leigh of Fox Chapel spoke about her experience and shared the story of when, in February 2016, she visited her doctor for a standard 20-week ultrasound. She was pregnant with her second child, and up until then, had a healthy pregnancy. But the ultrasound showed that her son had clubbed feet, hands, wrists, and arms, which was indicative that the baby wasn’t moving at all, and there was a systemic neurological issue present.

Pennsylvania law allows for abortions up to 23 weeks and six days. After that, abortions are permitted if the pregnant person's life or health is endangered. And with full genetic testing for fetal abnormalities taking about two weeks, she was already under a tight deadline to make a decision. Ultimately, Leigh chose to have an abortion.

“If I would have carried my son to term, it's most likely he wouldn’t have taken a breath,” said Leigh, who is a storyteller for Planned Parenthood Pennsylvania Advocates.

She noted that even though Pennsylvania’s law is much less strict than the new Texas law, it still came with hurdles. And she adds that if a six-week abortion ban, which is essentially an abortion ban since most pregnant people don’t know they are pregnant until after six weeks, were on the books in Pennsylvania she “would have done everything in my power to get an abortion.” (Gestational age is measured by the first day of the pregnant person's last period, meaning that when a person conceives a baby, they are already two weeks pregnant.)

“It really feels more dire than ever. I truly believe these laws are pushed by a small percentage of zealots,” said Leigh. “We have to let people hear our stories, and we can’t let these laws stand in Texas and come to places like Pennsylvania.”

Whitney Joson of Pittsburgh said bans like those in Texas take no consideration into pregnant people’s lives and that most abortions occuring later in their terms are very wanted pregnancies and choices to have abortions are about safety.

Arkoosh said that if both of these women had been forced into pregnancy by laws like the one in Texas, it would have put their health at risk. Arkoosh — who has been endorsed by Emily’s List, a large national political organization backing women candidates who support abortion rights — said that if she were elected to the U.S. Senate, she would use her experience as a physician to focus on protecting abortion access across the country.

“In this moment, we need a staunch defender of women's reproductive rights in the Senate,” said Arkoosh. “And as a physician, a mom, and a woman, I believe I am that person.”