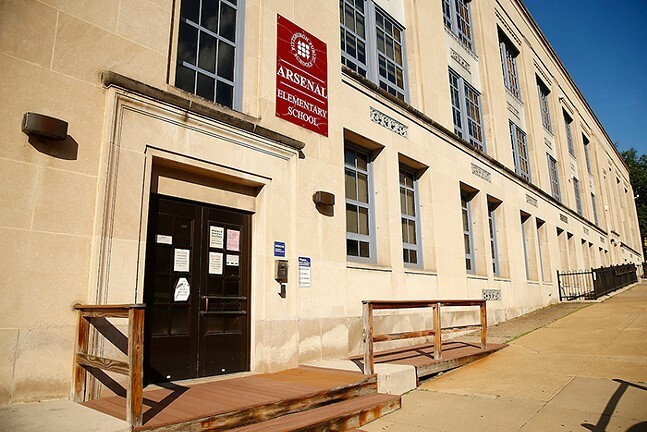 CP Photo: Jared Wickerham
Arsenal middle school in Lawrenceville
After a two-week break for the holidays, the landmark trial that could change how Pennsylvania funds its 500 public schools resumes Jan. 6 in Harrisburg, with witnesses from the William Penn School District in Delaware County expected to testify.

The case, initially dismissed by the Commonwealth Court in 2015 and revived by the state Supreme Court in 2017, pits six school districts, a group of parents, the state conference of the NAACP, and the Pennsylvania Association of Rural and Small Schools against the governor, Department of Education, education secretary, state Board of Education, and the highest-ranking leaders in the House and Senate.

The trial, which began in November and is expected to span through January, revolves around the state’s education funding formula that uses population numbers from the early 1990s to allocate money to schools across the state.

Although Pennsylvania adopted a modernized version for appropriations in 2016, using poverty percentage, household income, and districts’ capacity to raise local revenues, it only applies to new funding.

The petitioners, represented by the Education Law Center, the Public Interest Law Center, and the Los Angeles-based private law firm O’Melveny & Myers, claim the state maintains a funding system that discriminates against students in districts with low incomes and property values. They claim that the gap between what low-wealth school districts have and what they need is at least $4.6 billion.

“This case isn’t just about numbers. It’s a case about people,” Katrina Robson, an attorney representing the plaintiffs, said during opening statements in November. “It’s about children struggling to overcome circumstances that they can’t control.”

The funding formula “doesn’t calculate how big the pie should be — it just allocates the pie amongst the districts,” Robson added.

Eighteen witnesses for the petitioners have testified since the trial began, including former state Deputy Secretary of K-12 Education Matthew Stem, and officials and staff from districts included in the lawsuit, with Commonwealth Court Judge Renée Cohn Jubelirer presiding.

Witnesses from some of the districts included in the case have testified to classroom conditions, staffing restrictions, and resource limitations. Derek Black, a constitutional law professor at the University of South Carolina School of Law also took the stand to explain the origin of the education clause in the constitution.

Though he’s a respondent in the case, Gov. Tom Wolf, who staked his legacy on education, has agreed that funding disparities affect student success and called on the Legislature to run all education funds through the modernized fair-funding formula.

But attorneys for Senate President Pro Tempore Jake Corman (R-Centre) and House Speaker Bryan Cutler (R-Lancaster) argue the General Assembly has exceeded the constitutional minimum “by a wide margin,” Anthony Holtzman, who represents Corman, said in court. He added that a court cannot “devise standards” for the commonwealth’s needs without “crossing the line into the legislative arena.”

In a statement to the Capital-Star issued ahead of the trial, Corman said the Legislature has “always” met the constitutional mandate to provide a “thorough and efficient system of public education.” Corman referenced the most recent budget’s education allocation as an example and billions of dollars in COVID-19-related funds allocated to schools as part of federal relief.

The 2021-22 state budget, passed by the Republican-controlled Legislature, and signed by Wolf in June, came with a $300 million increase in education spending, including $100 million for the top 100 least-funded school districts.

Patrick Northen, who represents Cutler, also referenced statements from Wolf praising the 2021-22 budget’s investment in public education, arguing that Pennsylvania’s system is “quite a good one.”

Marley Parish is a reporter at the Pennsylvania Capital-Star, where this story first appeared.