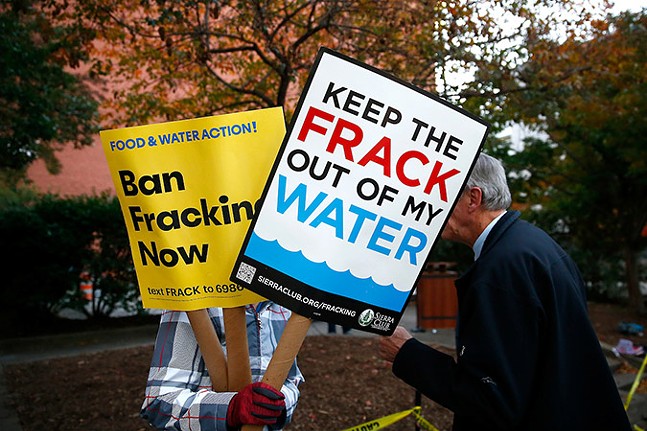 Earlier this week, Pittsburgh Mayor Bill Peduto and Lt. Gov. John Fetterman (D-Braddock) declared to the New York Times that Democratic presidential candidates like Bernie Sanders and Elizabeth Warren who have proposed nationwide fracking bans are hurting their chances to carry Pennsylvania. That's a perception shared by many pundits, politicians, and industry boosters in the state.

However, the results of a new poll from Franklin & Marshall College are putting those assumptions into question.

According to the poll, 48% of registered voters support a ban on fracking compared to 39% who oppose a ban. Support for a ban is split across partisan lines. Democrats favor a fracking ban 64%-23%, which Republicans oppose a ban. Only 30% of Republicans favor a ban, while 56% oppose. Independents are evenly split at 43%-43%. However, both self-described liberals and moderates in Pennsylvania support a ban, while conservatives oppose it.

Screenshot taken from fandm.edu
But at the same time, 48% of Pennsylvania voters say they support natural-gas drilling in the state, while 44% oppose. Over the last two years, statewide support for fracking has remained relatively unchanged. In March 2018, 50% of voters supported while 42% opposed.

The narrative around fracking in Pennsylvania is that it poses environmental risks, but those might be necessary to maintain the jobs the natural-gas drilling creates. (Of course, those jobs figures and claims from the fracking industry are suspect.)

Screenshot taken from fandm.edu
As Pittsburgh City Paper documented in December, Allegheny County politicians are also split on the support of fracking and the petrochemical industry it feeds. When asked if they support fracking and future cracker plants, 11 of those surveyed supported while nine opposed. The vast majority of politicians in the county didn’t indicate support either way. Peduto has come out opposed to future cracker plants and wants the region to transition away from fracking, but doesn't support an immediate ban. Fetterman, who campaigned for U.S. Senate in 2016 on a statewide fracking moratorium until better environmental regulations were instituted, now says he supports fracking as long as there is a severance tax placed on drillers.

Pittsburgh region voters are also conflicted about fracking. Voters in Allegheny County support a ban by a 61%-26% margin, while voters in Southwestern Pennsylvania (which the poll counts as voters in Beaver, Cambria, Fayette, Greene, Indiana, Somerset, Washington, and Westmoreland counties), oppose a fracking ban by a wide margin. Only 28% of these voters supported a ban, while 55% opposed it.

In the 2016 presidential election, there were about 650,000 voters in Allegheny County compared to about 573,000 voters in the Southwestern counties counted in the poll. Both 2016 candidates, Democrat Hillary Clinton and Republican Donald Trump, supported the fracking industry. When tallying the votes of these counties, Trump garnered about 625,000 votes compared to Clinton’s 556,000.

Ned Ketyer, an anti-fracking activist and pediatrician who lives in Washington County, says the results of the poll showcase the nuance he has seen when talking to Southwestern Pennsylvanians about fracking. He says there are some that support the industry, but many others that don't.

Overall though, Ketyer says most people he encounters don’t have any opinions on fracking. He says this leaves an opening for advocates and opponents to campaign to get Pennsylvanian voters to support or oppose fracking.

“There are thousands of people that are ambivalent,” says Ketyer. “It is the people in the middle that don't understand it or are ambivalent. Those are the people to make the argument to and to listen to.”

Articles from the New York Times and Washington Post sharing Peduto’s and Fetterman’s comments came out three days before the Franklin & Marshall College poll was released, which provided more nuance to Pennsylvania voters' support of fracking.