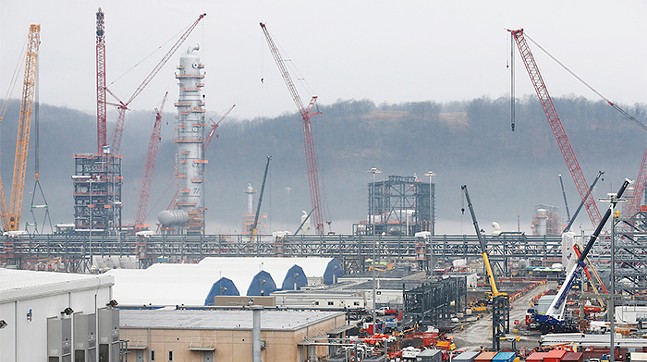 CP Photo: Jared Wickerham
The site of a Shell ethane cracker plant, shown under construction in 2018, in Monaca, Pa.
Yesterday, the Pennsylvania state Senate passed a bill that would potentially provide hundreds of millions in tax credits to petrochemical facilities and others that refine natural gas into products like plastic pellets or fertilizer.

The bill, HB 732, passed the state Senate by a 40-9 vote. All Republicans supported the bill and even the majority of Senate Democrats backed the measure. The bill is likely a do-over of an earlier bill, HB 1100, which also was written to offer tax credits to petrochemical companies. HB 1100 passed through the legislature, but Gov. Tom Wolf (D-York) vetoed that bill.

However, Wolf is poised to sign HB 732. Today, the state House passed HB 732 by a 163-38 vote, and it now heads to Wolf’s desk. According to StateImpact Pennsylvania, state Senate leaders said during yesterday’s floor debate that Wolf has agreed to sign the bill.

That means Pennsylvania will soon be providing a maximum of $6.7 million a year to companies that qualify, and only four a year can qualify. The incentive program would begin in 2024 and last until 2050, meaning a potential of about $670 million in tax credits could be handed out over the lifetime of the bill.

HB 732 is offering a smaller amount of tax credits compared to HB 1100, which could have potentially offered $26.5 per company per year, and potentially over $1 billion in tax breaks.

Even so, HB 732 has garnered several critics. Environmentalists have condemned the bill. In a press release, Clean Air Council director Joseph Otis Minott says HB 732 will make the state “sicker and dirtier.”

“There is no justifiable reason to offer hundreds of millions of dollars in taxpayer subsidies to incentivize the build-out of new fossil fuel infrastructure,” said Otis Minott.

Since petrochemical facilities and fertilizer plants are supplied natural-gas to refine and sometimes power their operations, HB 732 would play a role in raising demand for natural-gas drilling, aka fracking, across the commonwealth.

Copious amounts of methane also leak out of fracking wells. At a well about 60 miles from Pittsburgh in Ohio, more than 57,000 metric tons of methane leaked over 20 days in 2018. This amount from one well eclipsed the annual amount of methane that is emitted by the oil and gas industries of France, Norway, and the Netherlands combined. Studies vary, but methane is generally considered to be between 25-84 times more potent of a greenhouse gas than carbon dioxide.

On top of that, petrochemical facilities themselves emit large amounts of greenhouse gases. The Beaver County cracker plant is permitted by the state to emit 2.2 million tons of carbon dioxide each year, the equivalent of adding more than 480,000 cars to the Pittsburgh region.

Voters across the U.S. overwhelmingly want the government to take action against climate change, and Pennsylvanians are increasing their skepticism of fracking. According to a February poll from The Morning Call and Muhlenberg College, 44% of Pennsylvanians believe fracking poses a major health risk, while 36% disagree. And even Pennsylvania voters are split on whether fracking is a net gain for the state, with 38% saying fracking has provided more positives than negatives for the state, and 37% disagreeing.


Amendment fails. Did you hear that PA???? The majority of legislators don’t see any need for environmental impact studies w/their sham petrochemical tax credit program that does far more harm than good! @GovernorTomWolf any comments? Word on the senate floor says you support! 😵 https://t.co/RsJsB9QdP5

The natural-gas industry is celebrating HB 732’s passage. And the bill is a major victory for state Sen. John Yudichak (I-Luzerne), who wrote the bill. Yudichak has been lobbying hard for this bill in hopes to attract a petrochemical facility to his district. He said that 150 permanent jobs would be created in each site that qualifies for the tax credits. Two companies have already expressed interest in moving to Pennsylvania because of the bill, which would mean 300 permanent jobs, as well as likely a few thousand temporary construction jobs.

Some have said the additional jobs aren't worth the potential environmental consequences. As the New York Times pointed out earlier this week, there are already more than 3 million abandoned oil and gas wells across the U.S., and 2 million of which are unplugged, “releasing methane equivalent of annual emissions from more than 1.5 million cars."


With scores of fracking companies going bankrupt amid falling global demand, many drillers have abandoned wells all over Pennsylvania. Last year, Pennsylvania-based ARG Resources, which owns an oil drilling operation in Allegheny National Forest, shut it down and didn’t have enough money to plug any of its 1,600 wells. Environmental activists have said that plugging and clearing of these wells will eventually fall on Pennsylvania taxpayers.

On top of that, some are questioning if this is the best time to be handing out tax breaks, when the commonwealth is headed for a future of likely budget cuts under coronavirus and its potential economic aftermath.

State Rep. Sara Innamorato (D-Lawrenceville) voted against HB 732. She tweeted yesterday that Pennsylvania does need to create jobs during the high levels of unemployment, but wrote “no job is a good job if it requires our state & our families to mortgage our health & financial futures to create them.”


This amendment is modeled after HB1100.

In this time of great need, we do need to create jobs & build a more resilient economy. BUT no job is a good job if it requires our state & our families to mortgage our health & financial futures to create them. https://t.co/OdoiGuoZQK

More perplexing in all of this is that even though the majority of Senate Democrats backed the bill and Gov. Wolf still has veto power, the winners of this bill are the Republicans, especially Yudichak, and Democrats received little in return. While HB 732, compared to HB 1100, improved on prevailing wage requirements for workers, lowered the amount of tax breaks, and has some small, but weak, environmental promises, it didn't included any substantial Democratic priorities.

Furthermore, last year, Yudichak left the Democratic Party to become an independent who caucuses with Republicans. His departure from the Democratic caucus makes the Democrats’ chances of flipping the state Senate almost impossible. Democrats would have to flip three seats and retain a swing district in Allegheny County in order to control the state Senate after November. Political forecasters believe the chamber will remain in Republican control.