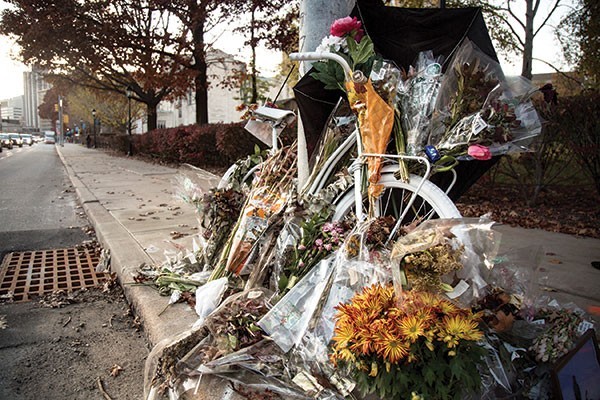 CP file photo: Theo Schwarz
A ghost bike memorial in 2015 marking the spot on Forbes Avenue where cyclist Susan Hicks was killed.
On Oct. 23, 2015, Susan Hicks was riding her bike in Oakland the exact way Pennsylvania law required her to: as if she were driving a car.

Back then, the configuration on Forbes Avenue was not friendly to cyclists, and Hicks, a 34-year-old University of Pittsburgh educator, pulled her bike behind an SUV and waited for a left-turn signal at a red light at Bigelow Boulevard. Then, a speeding driver slammed into a car behind her, causing a chain reaction that resulted in her death.

Hicks’ death was a tragedy and to cycling advocates, it could have been avoided if Forbes Avenue was designed with cyclists’ safety in mind. Two years later, and after impassioned pleas from Pittsburgh cyclists, the same stretch of Forbes was redesigned, and now includes buffered bike lanes, Copenhagen left-turn boxes, and a protected, counter-flow bike lane, the first of its kind in Pittsburgh.

Now, some Pennsylvania state lawmakers are advancing a new bill aimed to make streets across the commonwealth safer for cyclists, and the bill is named in honor of Hicks, as well as Emily Fredricks, a Philadelphia cyclist who was struck and killed by a garbage truck driver in 2017.

Susan and Emily’s Law, aka House Bill 140, was introduced in January by state Rep. David Maloney (R-Berks), an avid cyclist. On Feb. 4 it was unanimously passed out of the State House’s Transportation Committee. State Rep. Sara Innamorato (D-Lawrenceville) offered an amendment to name the law Susan’s and Emily’s Law in honor of Hicks and Fredricks. Her amendment was passed unanimously.

"Simply, HB 140 gives local traffic engineers the flexibility to incorporate parking protected bike lanes into infrastructure improvement projects," says Innamorato. "This measure will assist in making safer streets for us all and hopefully help prevent future crashes like the ones that resulted in the tragic deaths of Susan Hicks and Emily Fredricks."

HB 140 would allow for municipalities to create parking-protected bike lanes, which are lanes created when parking spots are shifted from directly next to the curb, to about 8-10 feet away from the curb. That new area becomes a bike lane and buffer zone, and the parked cars become a line of protection for cyclists. HB 140 would alter the state’s motor vehicle code to allow vehicles to legally park more than 12 inches away from the curbs, which would enable municipalities to create parking protected bike lanes on streets operated by municipalities.

A similar bill was nearly passed last year, but was held up by State Sen. John Sabatina (D-Philadelphia), who wanted to give Philadelphia community groups more veto power over certain parking protected bike lanes with the City of Brotherly Love. The bill then expired at the end of the session.

Innamorato is hopeful that this session, the parking protected bike lane bill will pass through both the state House and state Senate and become law.

"This year we hope to honor Susan, Emily, and the many others whose lives have been lost in bicycle and pedestrian crashes by getting it to the governor's desk," says Innamorato.