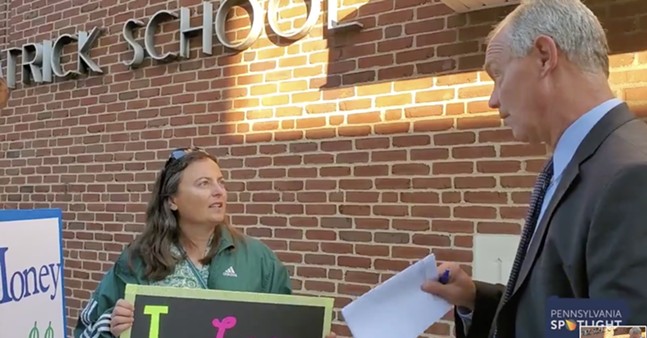 The video was posted by advocacy group Pennsylvania Spotlight, a left-leaning nonprofit advocating for statewide issues. The incident occurred outside of a Catholic School in Harrisburg, where Turzai was attending an event for U.S. Education Secretary Betsy DeVos.

“What you care about is a monopoly and special interests,” said Turzai, whose district encompasses the North Hills municipalities of McCandless, Pine, Marshall, Bradford Woods, and Franklin Park.

One of the advocates then said, “I am little offended from that,” to which Turzai responded, pointing to the posters they were holding, “Oh, I am offended by your posters.”

One poster read “I love public schools.” The other read “Public Money for Public Schools.”

Sincerely,
All of Pennsylvania pic.twitter.com/AOdCYpHdka


Requests to Turzai’s office for comment were not immediately answered. But Turzai did reply to the the PA Spolight tweet and wrote that the video did not include a section where he talked about the increases in public education funding.

Post the entire video! You evidently cut the segment where I discussed record level of spending on public education. Meanwhile, here is a chart of the facts. pic.twitter.com/cXEqW1UuPg

Turzai has been championing charter schools and so-called “school choice” legislation for most of his career. In addition to charter school support, Turzai also is a proponent of giving tax credits to businesses that provide scholarship funds for children to attend private schools. Pennsylvania already has some of the highest numbers of education tax-credit programs in the U.S., and Turzai recently introduced legislation to double that amount.

Turzai’s political opponent, state House candidate Emily Skopov (D-Marshall) condemned his comments. (Skopov ran for Turzai's seat and lost in 2018, and plans to challenge him again in 2020.) She tweeted that they were “abhorrent and reprehensible,” given that he represents the public, including public servants like teachers.


If @RepTurzai truly cared about kids & having education choices, he would ensure that ALL choices are good ones. Instead he enables a lack of accountability & transparency that allows the charter industry (aka his donors) to offer substandard education while lining their pockets. https://t.co/7xW4J2CuV0