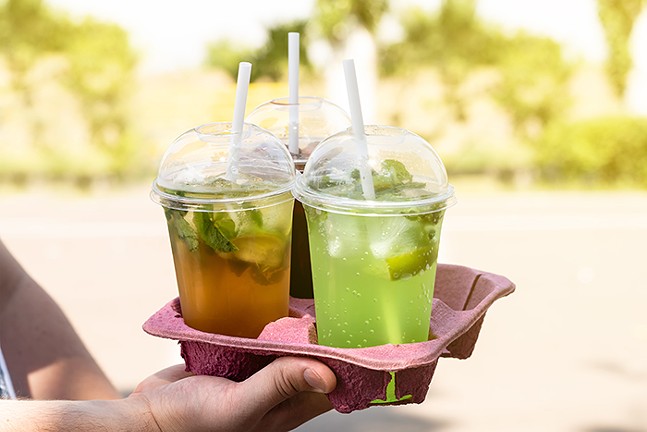 From the office mullet (business up top, sweats down below) to streaming first-run cinema, the COVID-19 pandemic forced us to get creative about aspects of everyday life that we’d always taken for granted.

But no innovation screams "pandemic breakthrough" quite like the to-go cocktail. Which now seems so insanely obvious it’s a wonder that it took the worst public health crisis in a century to finally make it real. But, hey, this is Pennsylvania, and our regulatory relationship with booze is … ahh … eccentric to say the least.

But with the bars closed early on during the pandemic, and then under strict occupancy limits later on, these stadium-sized flagons of mixed drinks (with the token bit of tape over the top of the straw) were as close as any of us got to an authentic bar experience.

Well, there’s some good news for devotees of these adult sippy-cups: On Tue., May 4, the House Liquor Control Committee voted 23-0 to approve legislation sponsored by Rep. Kurt Masser (R-Northumberland) a permanent fact of life in the Commonwealth. The bill now goes to the full House for action.

As you might imagine, after months of taking it on the chin economically, interest groups representing Pennsylvania’s embattled booze and saloon industries raised their plastic and/or paper cups in salute.

“The COVID-19 pandemic has devastated Pennsylvania’s hospitality businesses, and it will take years for them to fully recover,” David Wojnar, the senior VP of the Distilled Spirits Council of the United States, said in a statement. “Cocktails to-go [have] proven to be a vital part of survival during COVID-19 for Pennsylvania businesses, and making this measure permanent will only provide increased stability in the future. We thank the House Liquor Control Committee for moving this measure forward and encourage the full House to take up and pass this bill as soon as possible.”

All told, more than 30 states began allowing restaurants and/or bars to sell cocktails to-go as a COVID relief measure, according to Wojnar’s group. Already, lawmakers in Iowa, Ohio, Kentucky, Wisconsin, Montana, Arkansas, West Virginia, and Washington D.C. have made take-out cocktails permanent. And other states are contemplating a similar change, the trade group said.

In a memo soliciting co-sponsors for his measure, Masser made essentially the same argument, noting that “making this initiative permanent will provide our bars and restaurants with a needed option to continue to make up funds that they lost during this crisis.”

The committee’s vote comes on top of the Wolf administration’s announcement Tuesday that it plans to lift its remaining pandemic mitigation measures, except for its mask mandate, by Memorial Day. The mask mandate stays in place until 70% of adults are vaccinated.

In a statement, the Pennsylvania Licensed Beverage and Tavern Association, which represents saloon-keepers around the state (and supports Masser’s bill), welcomed the news, saying the last 14 months “have been some of the worst in industry history. There are countless stories of financial ruin and jobs lost.”

The industry group thanked the Legislature for its assistance, but also offered hearty thanks to patrons who kept their favorite watering holes going during the pandemic by buying gift cards or by ordering take-out.

“As many tavern owners know, it was the support of patrons ordering take-out or buying gift cards during the roughest days of mitigation orders that allowed many establishments to keep their heads above water,” the industry group said.

We’ll raise our take-out martini to that.
John Micek is the editor of the Pennsylvania Capital-Star, where this story first appeared.