Pa. has 5th most anti-government extremist groups among U.S. states 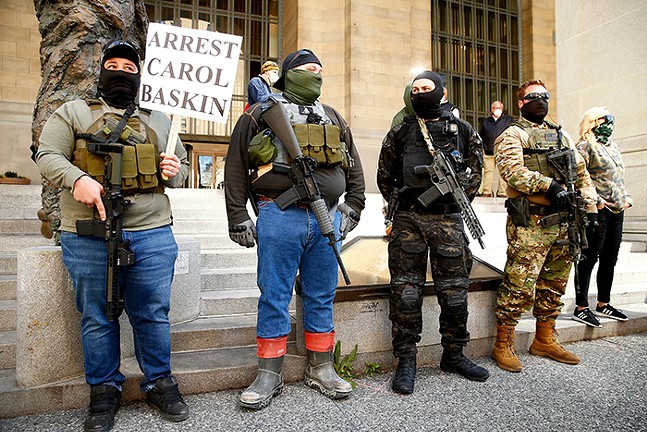 SPLC reports 566 active anti-government groups throughout America in 2020, which is marginally down from 576 groups in 2019. There were 169 militia groups among the anti-government extremist groups. SPLC compiled the list from field reports, group publications, the internet, law enforcement sources, and news reports, but did not document activities of groups that take place solely online.

According to SPLC, anti-government groups engage in groundless conspiracy theorizing or adhere to extreme anti-government doctrines, but don’t necessarily advocate or engage in violence or other criminal activities, though some have. Many warn of impending government violence or the need to prepare for a coming revolution. They believe the conspiracy theory that government groups are spearheading a “New World Order” to take away citizens’ property rights.

Iron City CRU was present with assault-style weapons, fatigues, and military-style gear at an anti-quarantine protest in April 2020, which justified their activity to “protect and defend” protesters who opposed the restrictions imposed on Pennsylvanians early in the pandemic. The group was also sporting Valknots, a symbol that has some association with white nationalism.

When Pittsburgh City Paper asked about the Valknots, a CRU member, who refused to be identified, shouted “do your research” and then called CP “communist.” Later, CRU issued a statement to the Pittsburgh Post-Gazette that they “publicly denounce any form of racism and will stand with any minority group should the need arise.”

SPLC reports that the pandemic, Black Lives Matter protests, and the 2020 elections have contributed to the increased activity of paramilitary groups.

Later in the summer, CRU was hired by a gym owner in Ambridge to “stand guard” over the property during a small Black Lives Matter protest that was held in the Beaver County town after the death of George Floyd.

Pennsylvania is also home to a few active Three Percenters groups, and CP saw people sporting Three Percenters patches at a pro-gun rights protest in Pittsburgh in 2019. The SPLC designates the Three Percenters as an extremist group who vow to resist gun control laws with force if necessary, and SPLC says the group is a core component within the anti-government militia movement. Their symbol is a Roman numeral three surrounded by a circle of stars.

There has been an increase in crackdowns on some of these anti-government groups, whether it be QAnon groups getting banned on social media platforms, or increased scrutiny from law enforcement following the insurrection on the Capitol. But SPLC says it expects anti-government activity to continue, given many of these groups' opposition to President Joe Biden, the current impeachment trial of Donald Trump, and the false belief that the 2020 election was stolen.

“The anti-government threat is likely to grow even worse in the months ahead, with the real possibility of new acts of domestic terrorism in response to Donald Trump’s impeachment trial, new health and safety measures to combat COVID-19, and more,” said SPLC president Margaret Huang to the Cincinnati Enquirer.

A full list of active anti-government extremist groups in Pennsylvania is listed below. Asterisks indicate an active militia group.