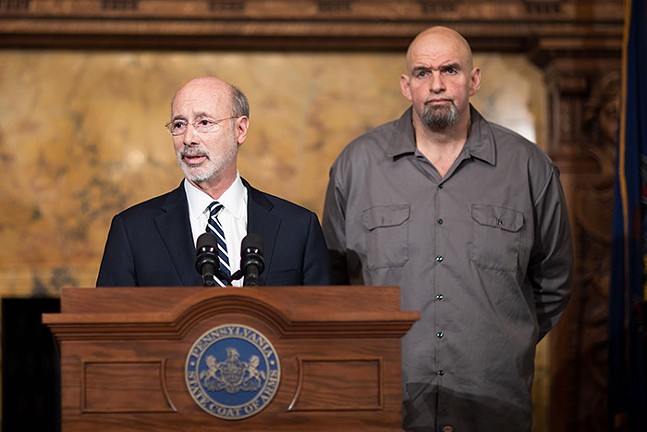 “We now know the majority of Pennsylvanians are in favor of legalization, and that includes me,” Wolf said at the press conference. “I look forward to seeing what we can accomplish together, especially the criminal justice reforms I am proposing today, which will have an immediately positive influence on thousands of families across Pennsylvania."

Wolf indicated his support was encouraged by the work of Fetterman, who completed a listening tour of all 67 counties in Pennsylvania, where he discussed recreational marijuana policy and received input from residents.

Today I’m with Lt. Gov. @JohnFetterman to call for legalization of recreational marijuana in PA.

John traveled to all 67 counties to find out what Pennsylvanians think about legalizing recreational marijuana, and many want legalization. pic.twitter.com/Re86OInfEL


According to a March poll from Franklin & Marshall College, 59 percent of Pennsylvanians support legalizing recreational marijuana.

A report created from Fetterman's tour compiled responses from those who attended and submitted comments. Allegheny County, with more than 4,000 responses, showed 90 percent support for recreational marijuana. Beaver, Butler, Washington, and Westmoreland counties all had support in the 80s.

“The Lieutenant Governor made good on his promise to visit all 67 counties to hear from Pennsylvanians about whether or not they support the legalization of adult-use recreational marijuana in the state,” Gov. Wolf said. “And among the many who voiced their opinions, the majority supported legalization.”

Photo: courtesy of governor's office
A stop on the statewide recreational marijuana legalization listening tour
But any path to legalization this year would have to go through a state legislature that is controlled by Republicans.

Pro-marijuana advocates skewered this interpretation. Patrick Nightingale of marijuana-advocacy group Pittsburgh NORML said Miskin was "scaremongering" and avoiding an "honest debate" about marijuana use, adding that none of the nine states with legal marijuana have legalized harder drugs.

Today, Pa. House GOP leadership released a statement saying "our caucus has no plans or interest in legalizing recreational marijuana."

House GOP leadership is out with a statement saying they aren't going to legalize marijuana, so there's that pic.twitter.com/vvoKQAqMmQ

The governor's full marijuana report can be read here.