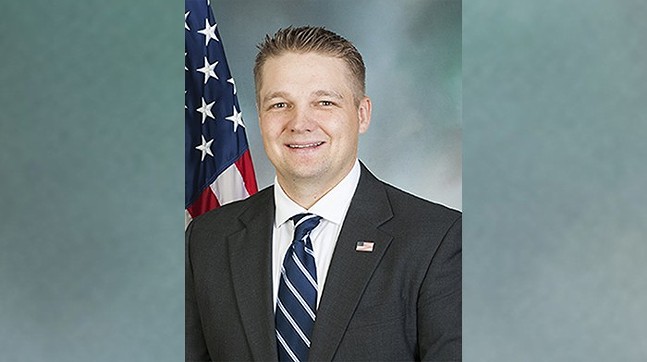 According to a campaign memo from Bernstine (R-New Beaver) viewed by the Capital-Star Thursday, House Majority Leader Kerry Benninghoff (R-Centre) and House Speaker Bryan Cutler (R-Lancaster) will appear at a June 8 breakfast fundraiser for Bernstine in Harrisburg.

The fundraiser is also listed on the website of the House Republican Campaign Committee, which works to defend incumbents and elect new state House Republicans. Admission to the event at Cafe Fresco in Harrisburg runs $250 to $1,000, according to information posted to a calendar maintained by Greenlee Partners, an influential Harrisburg lobbying firm.

In October 2020, the Beaver County Times reported that Bernstine had posted videos of himself encouraging his five-year-old son to smoke a cigar and use vulgar language about women.

Less than 24 hours after the story was published, House GOP leadership issued a joint statement calling for Bernstine to resign.

“As parents and fellow legislators, we are disgusted by Rep. Bernstine’s conduct,” the statement read. “In order to take the time necessary to focus on his family and repair his relationships, we call on Rep. Bernstine to immediately resign.”

Leadership also shut down his state-owned social media channels, which remain deactivated to this day.

But Bernstine defied their call, and asked voters to decide his fate. Running in a three-way general election, he won with 51.5% of the vote, defeating his closest opponent by more than 17 percentage points.


Pa. House Republican leadership said they were disgusted by Rep. Aaron Bernstine’s conduct. Bernstine fired back that leadership did not have the courage to run conservative bills. Now, ahead of a tough election cycle, they will fundraise together in June.https://t.co/CgVRCNDeOE

Bernstine then posted a handful of tweets criticizing House Republican leadership after his reelection.

“113 is ONLY more valuable than 109 if we have the ‘courage’ to run bills like constitutional carry [of firearms], Taxpayer Protection Act, [education savings account], etc. … otherwise, we are wasting the authority given to us by the people,” Bernstine tweeted on Nov. 9, in response to a tweet celebrating Republicans’ expanded majority.

In a text message Thursday, Bernstine downplayed the incident and his brief split with leadership.

“That stuff is in the past,” he told the Capital-Star. “Our caucus and this leadership team is focused on driving an agenda that gets people back to work.”

He added he was proud to be part of the caucus, and thankful for his 2020 re-election.

The videos of his son were not Bernstine’s first brush with controversy on social media. In 2017 amid Black Lives Matter protests, he said he would not stop his car “under any conditions” if protesters were in his way.

Cutler, Benninghoff, and the HRCC did not immediately reply to a request for comment. Leaders regularly hold fundraisers with rank-and-file lawmakers to help increase their war chest for coming elections.

Republicans currently hold a 111-90 advantage in the lower chamber, with two vacancies likely to be filled by Republicans.

Democrats haven’t controlled the House since 2010, and spent a record shattering $21.3 million in an unsuccessful attempt to flip the chamber in 2020. That included the late targeting of Bernstine and his three-way race.

In a statement, a spokesperson for the House Democratic Campaign Committee, the HRCC’s partisan opposite, pointed out the shift in Republican’s feelings to Bernstine, who “called for his resignation for disgusting and deeply disturbing behavior.”

“Now they embrace him,” the HDCC’s Gavin Lichtenstein said in an email. “House Republicans have made it clear many times — their ethical compass blows with the wind.”

The 2022 election will likely occur with new district boundaries after redistricting, shaking up who could gain power in not just 2022, but for the coming decade.
Stephen Caruso is a reporter with the Pennsylvania Capital-Star where this story first appeared.