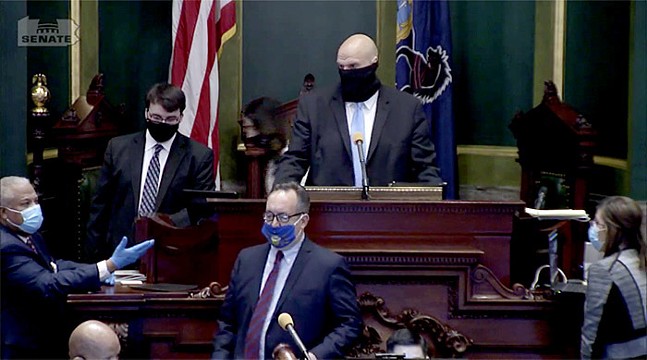 Screenshot of Pa. state Senate livestream
Senate President Pro Tempore Jake Corman in foreground and Lt. Gov. John Fetterman in background
What was supposed to be a routine and ceremonial meeting of the Pennsylvania state Senate devolved into chaos on Tuesday, as Republican lawmakers moved to block one Democrat from being sworn in to his seat, and ousted another from his position as their presiding officer.

The floor of the Senate chamber was engulfed in shouting for minutes on end Tuesday after Republican lawmakers motioned to delay the inauguration of incumbent state Sen. Jim Brewster (D-McKeesport) whose 69-vote victory in the Nov. 3 General Election is being challenged by his Republican opponent Nicole Ziccarelli.

Pennsylvania’s Secretary of State has already certified Brewster as the winner in the race for the 45th Senate District, which includes parts of Allegheny and Westmoreland counties.

The state Supreme Court last month rejected Ziccarelli’s request to toss hundreds of mail-in ballots on technical grounds. Ziccarelli has now brought that argument to federal court, and to the Senate itself in a petition contesting the election results and asking Senators to consider her the victor.

Republicans on Monday announced their intent to block Brewster’s swearing-in while they consider Ziccarelli’s petition.

That didn’t stop Democrats from mounting a protest. And on Tuesday they moved to put off inaugurating all 25 recently elected senators until a federal judge issues a judgement in Ziccarelli’s court case.

What ensued was more than 20 minutes of ugly parliamentary sparring. The session reached a fever pitch when Lt. Gov. John Fetterman, the Democrat who serves as Senate president, started to recognize Democratic lawmakers over the protests of Republicans.

Fetterman’s Senate post calls on him to enforce order and decorum in the Senate and call on lawmakers to speak. He’s supposed to carry out those duties without showing favor to either party.

But Fetterman took a clear stance in the roiling debate Tuesday, at one point making a request that all senators, including Brewster, be given their oath of office.

He eventually drew a rebuke from Sen. Ryan Aument (R-Lancaster), who warned Fetterman that the Senate would replace him “if you continue to refuse to perform your duties.”

In the minutes that followed, GOP lawmakers called a vote to replace Fetterman with a Republican officer, while Democrats shouted that the motion was procedurally invalid.

“You are breaking the constitution and the laws of the commonwealth and violating the oath of office you yourself have taken!” an irate Sen. Tony Williams (D-Philadelphia) yelled at Senate President Pro Tempore Jake Corman (R-Centre), as he moved to replace Fetterman. “We will not participate in this farce!”

Fetterman refused to cede the rostrum. He and Corman spoke over one another as they both tried to execute duties as Senate president and start the inaugurations.

Fetterman eventually left the floor “when it became apparent that [Republicans] would not recognize him as leader,” his spokeswoman Christina Kauffman said Tuesday afternoon.

When it was time for Democrats to take their oaths, Senate Majority Leader Kim Ward (R-Westmoreland) made another motion not to seat Brewster as the senator for the 45th District.

Brewster tried to take his oath office anyway, and Corman said Democrats could not be sworn into office until he left the Senate rostrum.

“We will go on with the rest of our business and not swear anyone in,” Corman said while waiting for Brewster to leave.

Democrats eventually took their oaths of office without Brewster. But the partisan rancor didn’t end once senators moved on to the business of launching a new legislative session.

When it came time for them to vote for chamber leaders, Senate Minority Leader Jay Costa (D-Forest Hills) called on his caucus to oppose Corman as the Senate’s top officer.

Senate journals show that the Senate President Pro Tempore has enjoyed unanimous support from the chamber since at least 1995. But Costa said Tuesday that Corman had failed to protect the interests of the minority caucus, and 18 Democrats voted against him.


The votes were counted, the election was certified, and Sen. Jim Brewster is the winner of the 45th Senate District.

Senate Republicans’ refusal to swear him in is a disgrace to democracy.

I'll do everything in my power to ensure voters have the final say in our elections.

The fiery exchanges on Tuesday drew widespread attention on social media. They also elicited a rebuke from Gov. Tom Wolf, who said the Senate had failed to uphold the will of voters by refusing to seat Brewster.

“Republicans in Pennsylvania and nationally have spread disinformation and used it to subvert the democratic process,” Wolf’s strongly worded statement began. “Brewster rightfully won the 45th Senate District, but Senate Republicans are ignoring the voters in the district and refusing to swear him in as Senator. This is a shameful power grab that disgraces the institution.”