Pa. residents ‘deserve not only safe neighborhoods but for those that choose to use marijuana, access to a safe and trusted product,’ he said 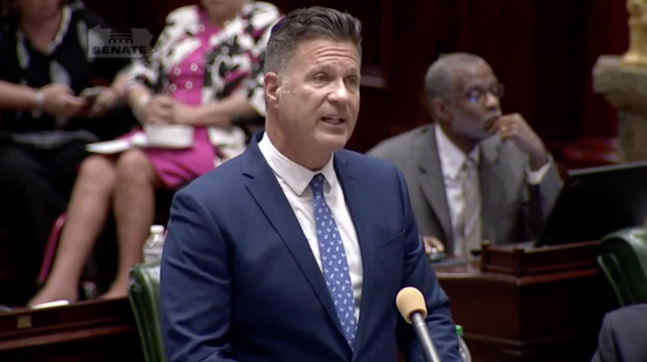 And rather than “sit idly by” and let his colleagues draft legislation, he’s proposing his own — a bill that would legalize cannabis for those 21 and older and use projected revenue to fund State Police and community programs.

“For decades, marijuana has been used by adult residents in the state, but such use has financially benefitted and perpetuated organized crime, gangs, and cartels,” Regan, who chairs the Senate Law and Justice Committee, wrote in a Oct. 4 memo asking colleagues for their support. “The street-level marijuana sold by these organizations is often laced with illicit drugs and toxic additives, and these criminals have been responsible for violence, mayhem, and murder across our state and country.”

He added: “Pennsylvanians deserve not only safe neighborhoods but for those that choose to use marijuana, access to a safe and trusted product.”

Medicinal cannabis has been legal for use in Pennsylvania since 2016.

Citing the state’s “successful” medical marijuana program, Regan said it’s possible to legalize adult-use cannabis, noting the “proven benefits” for health purposes. He added that it could also alleviate law enforcement and prosecutors. Instead, they could focus on “protecting our residents from the violent criminals and large-scale drug importers that are also dealing in heroin and fentanyl” — not minor offenses.

After Colorado legalized recreational cannabis in 2012, there have been 18 other states that have followed suit.

According to the Centers for Disease Control and Prevention, cannabis overdose is unlikely. Signs of using too much include extreme confusion, anxiety, paranoia, panic, fast heart rate, delusions or hallucinations, increased blood pressure, and severe nausea or vomiting. In some cases, these reactions can lead to unintentional injury.

“This will then allow for proper investment in Pennsylvania’s roads and bridges, offsetting the costs of building out our 21st-century transportation needs and eliminating the supposed necessity for PennDOT’s bridge tolling plan,” he wrote. “Further, a strong infrastructure will lead to more job creators and entrepreneurs investing in Pennsylvania’s economic future.”

It’s a proposal welcomed by Gov. Tom Wolf and Lt. Gov. John Fetterman, both Democrats. However, it’s unlikely to make it through the Republican-controlled General Assembly.

In February, Jason Gottesman, a spokesperson for House Majority Leader Kerry Benninghoff (R-Centre), told the York Daily Record there is no support for legalization within the caucus.

When Wolf brought up legalization in 2018, Senate President Pro Tempore Jake Corman (R-Centre) called it “reckless and irresponsible.” He vowed to do everything in his power to prevent legalization.

“Recreational marijuana is a mind-altering narcotic which will harm our youth as it is a depressant and a gateway drug to other illegal substances,” he said in a statement. “Combine that with a lack of credible research on the societal costs and opposition from prosecutors, the medical community, and law enforcement, and you have the makings of a catastrophe.”
Marley Parish is a reporter at the Pennsylvania Capital-Star, where this story first appeared.