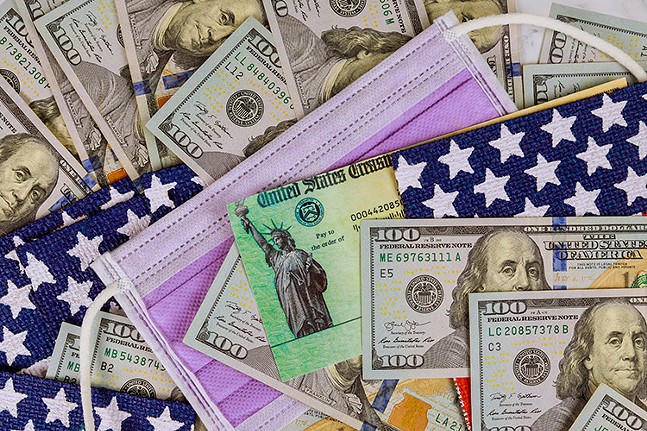 A plan to get nearly $1 billion in financial aid into the hands of the state’s renters, private schools, and restaurants is moving through the Pennsylvania General Assembly.

The plan, passed unanimously by the Republican-controlled state Senate Wednesday, will allocate $912 million in mostly federal funds that were sent to the state in the December stimulus bill approved by Congress.

It now heads to the majority GOP House, which has signaled it will take prompt action and get the deal to Gov. Tom Wolf’s desk as soon as next week.

A spokesperson for Wolf, a Democrat, did not say if he would sign the proposal, which also includes his plan to transfer $145 million from an unrelated fund for state grants for struggling restaurants and bars.

“We look forward to continuing to work with the legislature on this proposal as it continues through the process,” Wolf spokesperson Lyndsay Kensinger said in an email.

But the quick movement through the Republican-controlled General Assembly represents a small win for bipartisanship in the political divided state Capitol.

The bill was needed to allocate federal dollars sent to Pennsylvania as part of the second federal stimulus signed by former President Donald Trump last month.

The bill, which also sent every American $600, provided Pennsylvania with more than $5.4 billion in direct aid according to a report prepared by Democratic staff on the House Appropriations Committee.

Billions of dollars worth of that total was allocated, via funding formula, to public schools, public health, and transportation agencies, among other causes. But aid for renters, utility ratepayers, and private schools has to be approved by lawmakers and signed by Wolf.

All told, the state received $850 million to help low-income renters and ratepayers. Of that, $280 million could be distributed directly to the state’s 18 biggest counties — including Alllegheny, Philadelphia, Erie, and Lehigh counties.

The remaining $570 million will be allocated to the counties by the Department of Human Services under the advancing legislation.

Advocates for both landlords and tenants agreed that the Senate proposal might not experience the same issues a smaller rental assistance program in 2020.

About two dozen protesters from the Sunshine Movement are outside the State Capitol in Harrisburg protesting for action on rental relief. pic.twitter.com/7kVj94A0xq


The state set aside $150 million for renters last June. But that program suffered from implementation issues. In the end, more than $100 million from the program instead went to corrections officers’ salaries instead of needy renters.

Landlords could only receive up to $750 — less than the median state rental payment — a month under the old plan and had to forgive all debts greater than that payment. Facing losses, property owners opted out of the program, Pennsylvania Housing Alliance executive director Phyllis Chamberlain said.

But those limits were pulled out of the second stimulus at the federal level, likely making program participation more popular with landlords, Chamberlain added.

Both Chamberlain and advocates for renters, such as attorney Rachel Garland with Community Legal Services in Philadelphia, said they were cheered by the General Assembly’s quick action.

Garland also pointed out that the $850 million price tag was far exceeded in the fall allocation to rental relief.

But she raised a concern that the program’s slim allocation for administrative costs — just 1% at the state level, and 2% for counties — might not be enough to effectively get assistance to renters.

Effectively distributing the rental aid requires public employees to set up a website, answer calls and respond to emails.

Garland also raised a concern that the late August deadline for counties to use the rental dollars was too late to reallocate dollars or fix the program if it still proved faulty.

“It would be a real disaster for this money to sit there unspent,” she told the Capital-Star.

Not all the allocated money came from the federal government. The proposal also includes $145 million in state grants to restaurants, taverns and hotels, transferred from a public fund backstopping state workers’ compensation insurers.

The grants would max out at $50,000 per applicant, and could only go to businesses with less than 500 employees and a net worth of $15 million or less that have lost more than 25% of their revenue in 2020.

The money will be distributed through local economic development agencies. Applications for aid would begin by mid-March.

Wolf identified the funding source in December, and he and legislative Democrats have pressed for a vote on the plan.

The Senate bill also allocates a little under $150 million in grants to private schools, $17 million to career and technical education, and $5 million to the state high education system, among other line items.

Some small edits could still be the wings. House Democrats signaled they hoped to expand the number of agencies that could distribute the small business grants to ensure diversity of grant recipients.
Stephen Caruso is a reporter with the Pennsylvania Capital-Star where this story first appeared.

Pittsburgh artists, musicians, politicians, and others reveal the first thing they want to do after getting the COVID-19 vaccine