Pa. Democrats back bill protecting Dreamers that would grant them path to citizenship 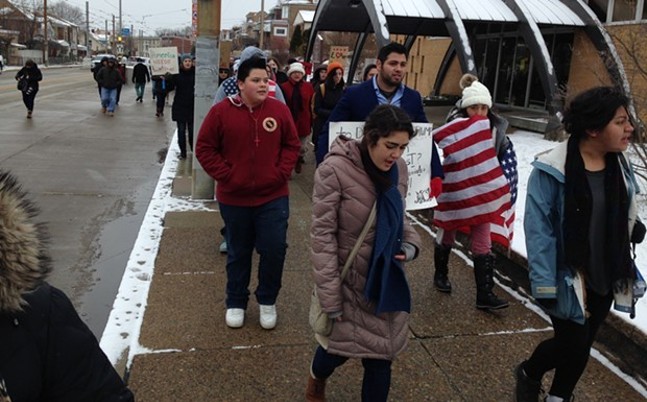 CP photo: Ryan Deto
Young Pittsburgh immigrants and Dreamers march in a protest in 2017.
In 2017, President Donald Trump tried to end the Deferred Action for Childhood Arrivals (DACA) and Temporary Protected Status (TPS), meaning millions of immigrants who have been in America for decades became at risk of being deported.

Since then, Congress has failed to pass immigration reform that would protect Dreamers, those who were brought into the country illegally as young children, and TPS holders, who were given temporary protected status because they were unable to return home safely. Back when Republicans were in control of all three chambers (House, Senate, and White House), they attempted to pass immigration reform, but failed.

Now with Democrats in charge of the U.S. House, a new effort is emerging to provide protections to these immigrants and grant them a path to seek citizenship. And the bill has garnered wide ranging support among Pennsylvania Democrats, including several from the Pittsburgh area.

“[We] are united in our belief that the time has come for Congress to provide permanent protection and a path to citizenship for Dreamers and beneficiaries of programs like Temporary Protected Status (TPS),” reads the letter of support. “These individuals and their families play an integral role in our communities, and make important contributions to our schools, workplaces, and shared prosperity as a nation.”

H.R. 6 is cosponsored by every Democratic member of the Pennsylvania Congressional delegation, including local U.S. Reps. Mike Doyle (D-Forest Hills) and Conor Lamb (D-Mount Lebanon). The bill would essentially reinstate the DACA program that protected undocumented immigrants brought to the U.S. as children, as long as they followed a set of rules, like complete educational and job-seeking requirements.

Trump’s decision to end the DACA and TPS programs has not come to full fruition; the case has been held up in court, meaning some immigrants, but not all, in these programs are still protected. However, the coalition supporting H.R. 6 worries that those programs could still be ended in full, and then those immigrants could be deported, writing that would be “senselessly cruel and also horribly counterproductive to the interests of our communities.”

No Republicans have signed onto the letter, nor cosponsored H.R., but the coalition is hopeful to gain some bipartisan support for the effort.

“As the leaders of states and communities across the country, we recognize how Dreamers and TPS holders have enriched and strengthened our cities, states, schools, businesses, congregations, and families,” reads the letter. “We believe it is a moral imperative that Republicans and Democrats in Congress work together to enact bipartisan legislation that replaces fear and uncertainty with permanent protection for these individuals.”