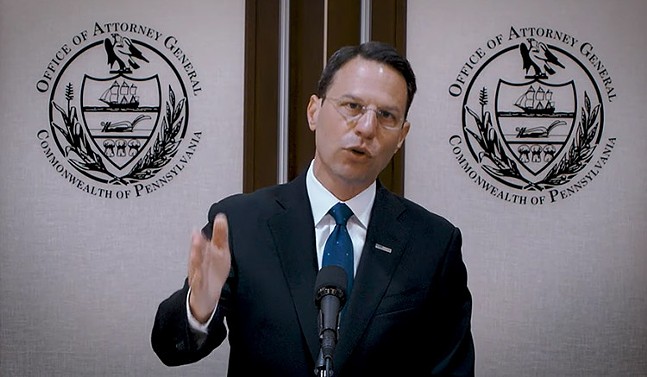 Screenshot from PA Attorney General Josh Shapiro's Official Range Resources Announcement on June 12, 2020
Yesterday, the large fracking company Range Resources pled no contest to charges of environmental crimes related to leaks and contamination at natural-gas wells in Washington County. The plea was in response to charges set forth by Pennsylvania Attorney General Josh Shapiro (D-Montgomery), which stemmed from a two-year investigation.

“In Pennsylvania, clean air and pure water is a constitutional right, yet too often frackers from across the country come to our Commonwealth, walk into our communities, and ― sometimes, without care or consequence, ― strip us of those basic rights,” said Shapiro during a video released yesterday.

My Office, in conjunction with the 43rd Statewide Grand Jury, criminally charged Range Resources -- a fracking company -- for its conduct at well sites in Washington Co.

Range Resources has pleaded no contest to negligent oversight.https://t.co/tUf4zXZTnk

The Texas-based Range Resources will pay $150,000 in fines for charges related to leaks and spills at a site named Brownlee and at a site named Yeager. Both of these locations are in Washington County, just south of Pittsburgh. The investigations, conducted by Shapiro’s office and the 43rd Statewide Grand Jury, found that a storage tank at the Brownlee site leaked 2,000 gallons of fracking waste into a nearby creek and field in 2018. The leak contamination at Brownlee covered nearly one-third acres of a nearby farm and required the removal of approximately 100 trees and 12,000 square feet of soil.

The investigation also found that Range Resources knowingly covered up severe contamination problems at a storage pond near the Yeager site. The investigation found an internal Range Resource email that states “[w]e have flushed the reserve pit with approximately 30,000 gallons of water, but I fear this is nowhere near enough, based on the amount of time that the reserve pit may have been leaking.”

Range Resources sent a statement to Pittsburgh City Paper regarding the “misdemeanor charges regarding past operations” at Brownlee and Yeager sites.

“Importantly, Range has already undertaken full remediation, approved by regulators, at both sites referenced in the presentments,” reads the statement. “We stand behind our track record as a company that operates in a safe and sustainable manner, focusing on protecting our environment, our people and the communities where we work.”

Range Resources was one of the first energy companies to begin fracking in Southwestern Pennsylvania. In addition to environmental and health consequences like water contamination, increased risks for asthma patients, and links to a rare string of cancer, wells also leak copious amounts of methane, a powerful greenhouse gas, into the atmosphere.

Pennsylvania started peak drilling sometime early in the 2010s. In 2012, the company claimed in commercials that natural-gas drilling was “just the beginning” and that Pittsburgh would become a new manufacturing hub “where manufacturing will become American again.”

Those claims never materialized. Since 2012, the Pittsburgh region has lost about 7,000 manufacturing jobs, and is now at the lowest level of manufacturing employment in modern history.

Many fracking companies in the Pittsburgh region have been shrinking their presences in Appalachia, including laying off hundreds of positions. Range has not committed to pulling out of Appalachia, like other oil giant Chevron, but did cut dozens of Pittsburgh-area jobs last year.
Penn Future is an environmental advocacy group that has been critical of fracking in the state since the natural-gas companies moved to Pennsylvania. Penn Future CEO Jacquelyn Bonomo says the Attorney General’s charges confirms their criticism of the fracking industry, in that it chooses profits over Pennsylvanians' health, and the state’s environment.

“This careless industry’s agenda is finally being pulled back and exposed,” said Bonomo in a statement. “It’s an agenda that reveals a company that does not have the public’s best interest in mind, that runs roughshod over our precious land and water resources, and one that has been protected by its boosters in the state legislature for far too long.”