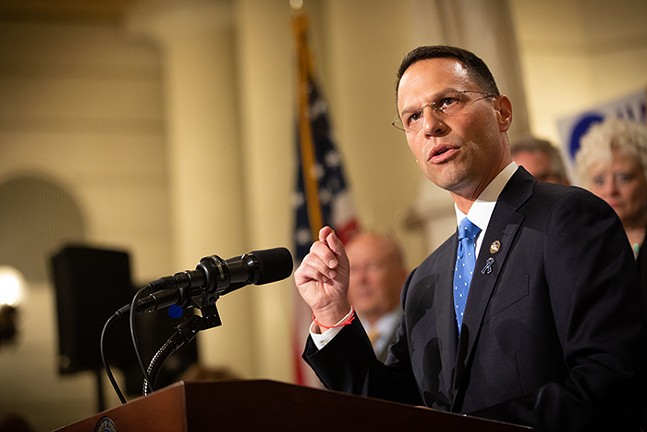 Photo: Courtesy office of Gov. Tom Wolf
Josh Shapiro
After an investigation was called into the conduct of a Vandergrift Police officer against a Black diner customer who claims he was racially profiled, Pennsylvania Attorney General Josh Shapiro is speaking out on the case, saying that the diner was harassed by the officer and “he should not be trusted to uphold the responsibilities of being a police officer.”

On April 17, a patron at a restaurant in Vandergrift in Westmoreland County recorded an encounter he had with a police officer and posted the video on social media, which soon went viral. According to reporting from WTAE, Vandergrift Police officer William Moore approached a couple dining in G & G restaurant and asked about their service dog. The woman then took the dog home, but the man, Marcus Townsend, stayed.

Video shows Moore asked Townsend for identification without reason. Townsend told WTAE that Moore then mentioned Townsend’s tattoos and claimed to smell weed. Townsend, who is Black, said he was the only Black patron in the restaurant and claimed he was racially profiled by Moore.

"For him to come straight to me," Townsend said to WTAE. "I'm the only Black dude in there. He's talking about the my tattoos on my face. It's all on the Facebook post and I just don't understand it."

On April 19, the Vandergrift mayor announced that Moore has been taken off the schedule and was placed on paid leave pending an investigation into the incident.

Shapiro tweeted on April 26 that Moore “cast aside the respect of law enforcement.” Shapiro also mentioned Moore’s prior assault — Moore was charged in 2017 for misdemeanor assault of a teenager — and his substance abuse issues as additional reasons he believes that Moore should no longer be employed as a police officer.


While a local investigation is pending, given Moore’s prior assault and substance abuse issues, it’s clear to me he should not be trusted to uphold the responsibilities of being a police officer.

After Townsend’s video went viral, the G & G Restaurant called Townsend to invite him back to the restaurant and posted a statement on Facebook calling the situation inexcusable. “We completely condemn any type of demeaning behavior towards any individual who walks through our doors,” reads G & G’s statement.

According to TribLive, once an internal investigation is completed, Vandergrift Council will vote on whether Moore can return to duty.