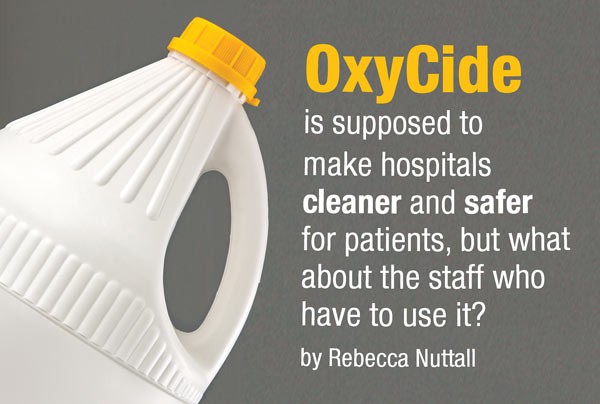 Last year, employees at the University of Vermont Medical Center had the same thought after OxyCide was introduced to their facilities.

"Some of our members started complaining of fairly severe symptoms," says Laurie Aunchman, president of AFT-Vermont, a union that represents nurses.

According to Ecolab, the product's active ingredients are hydrogen peroxide and peracetic/peroxyacetic acid. The product's safety-data sheet lists a number of precautionary measures for using the product if it is handled in its non-diluted form.

If handled "as sold," the sheet says users should wear protective clothing like goggles, gloves and an apron. Users should also wear a respirator "when ventilation is inadequate and occupational exposure limits are exceeded."

These recommendations don't jibe with what nurses at the Vermont Medical Center were experiencing.

"Even though the product has been tested, when people start having negative reactions, you have to look at whether this is safe. I don't care what the literature says that the company is giving you," Aunchman says. "I've seen rashes. One housekeeper in the area I work in, she was wearing gloves, but it was above the glove line."

"We did our own thorough review and pilot program with this product prior to starting to use it throughout the facilities at the end of September," says Mike Noble, spokesperson for VCM. "A number of our staff began to report they experienced skin and/or respiratory irritation associated with this product."

While staff at VMC filed an OSHA complaint, the decision by administrators to stop using OxyCide came before OSHA's ruling, which has yet to be released and is expected later this month.

"In response, we tried to address these concerns by adjusting our application methods.  Even after these adjustments, we continued to receive reports of staff being negatively affected, therefore we made the decision to discontinue use of the product in January," says Noble. "We felt that the expected benefits realized by the use of OxyCide simply do not outweigh the impact on our team or the potential impact on patients."

Some say all chemicals should undergo more research before being made available for use. According to Health Care Without Harm, an organization focused on improving sustainability and environmental justice in the health sector, the laws governing industrial chemicals do not require adequate testing of new and existing toxic chemicals and materials.

"The amount of scientific research on chemicals varies greatly, depending on the specific chemical in question," says Rachel Gibson, director of the Safer Chemicals Program of Health Care Without Harm. "This is because of our broken federal regulatory system that allows chemicals on the market without requiring manufacturers to demonstrate that they are safe."

The Safer Chemicals Program helps hospitals find sustainable alternatives to cleaning products, but they do not focus on disinfectants like OxyCide because of the important role disinfectants play in infection control.

"Disinfection can be a more sensitive area for hospitals to address and more difficult to navigate the tradeoffs between infection-control and potential toxic-chemical exposures, especially for those hospitals newly working on the issue of toxic chemicals," says Gibson.

While Gibson said she wasn't familiar with research on peracetic acid, one of the active ingredients in OxyCide, she did point to an April 2014 report by the San Francisco Department of the Environment that says there is a link between the ingredient and asthma.

"The trend is definitely toward less hazardous, less toxic products," says Griffin, who has more than 30 years of experience in the cleaning industry. "Health care is a very good leader in that area of transitioning away from the more hazardous product to the safer products."

While he's a proponent of "green" and "sustainable" cleaning products that have lower environmental impacts, he says more-toxic products are necessary in the health-care industry. He also says any product can be hazardous if the correct precautions aren't taken.

"That's why they have goggles and that's why they have protective equipment," says Griffin. "In health care, we have viruses and bacteria that will kill people, and the cleaner's job is to remove those. So the product has to be stronger than the virus. That's why they're disinfectants, because they kill things. So if you expose yourself to it, you're going to get a reaction. That's why you wear the gloves and the goggles."

But at the local UPMC hospitals, some employees say the precautions they were trained to use when handling OxyCide are not preventing the negative side effects they've experienced.

"I don't think it's a safe product for us to use despite that people say it's within standards," says Sheldon, the UPMC employee who filed the OSHA complaint. "It's causing so many problems that, quite frankly, it needs to be removed."