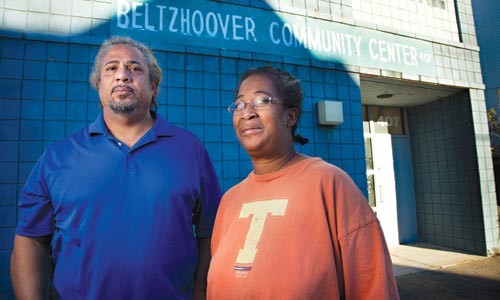 The speech that Rashad Byrdsong was scheduled to give to the Beltzhoover Neighborhood Council on Oct. 23 was titled "Are You Angry Yet?" It was about youth violence -- something Beltzhoover, a struggling neighborhood in the south of Pittsburgh, has seen plenty of. And the roughly two dozen people gathered inside St. Paul's A.M.E. Church were angry.

Often at each other.

Though the meeting was billed as a "forum to inform the community on the projects" that the Council was working on, board member Vernon Lipscomb announced there would be no discussion of what he called "misunderstandings."

"There are issues that must be addressed!" countered Linda Wheadon, who was sitting in the front row. Wheadon and some allies began peppering Lipscomb with questions about changes to the board's bylaws, the recent removal of board members and other concerns.

Temperatures increased -- though the church hall was cold and dark -- and Wheadon began shouting. "We're not going to have the Taliban in Beltzhoover!" she cried.

Byrdsong, a well-known Homewood-based community activist, gave his speech, but by then it was clear that the Beltzhoover Neighborhood Council has become almost as troubled as the hilltop neighborhood it's designed to save. Wheadon and others are seeking greater transparency, accusing the board of shutting out the broader community. Meanwhile, the group has failed to spend money that the city has allocated to it.

"Kids are dying in the streets," Wheadon said later, "and the people who should be getting this under control are at war with each other."

For nearly half a century, the BNC's mission has been to "help build a stable community." The community could use the help. According to 2000 Census Bureau statistics, the poverty rate in Beltzhoover is 26 percent -- roughly the same as Lincoln-Larimer's. And the community was horrified by a broad-daylight Sept. 11 shooting, which left 19-year-old Dywayne Heath dead.

But the BNC has struggled to stem the tide. In recent years, for example, the group has failed to come up with a plan for spending government money intended to help troubled communities.

According to Richard Bellisario, the city's assistant planning director for community development, the BNC was offered $2,000 in Community Development Block Grants in each of the past two years. But the group has never actually received the money, because it failed to sign a contract with the city spelling out how the money will be used. (The last time the BNC signed a contract was in 2007, when the BNC received $5,000.)

Because the group has failed to finalize a deal with the city for two straight years, says Bellisario, "That's starting to say to me that they have a wee bit of a problem." And that problem, he says, is probably due to frequent changes in leadership over the past few years. "That really puts a hurt on what a group does."

Resident Richard Carrington, who sits on the city's Citizens Police Review Board and operates the outreach group Voices Against Violence, says he noticed trouble almost immediately after joining the board a year ago. The board has 17 slots, but Carrington was one of only eight active members.

"They called for meetings, but they didn't hold them," he says. "Within a year's time, they only had two meetings."

Wheadon, a property-owner in Beltzhoover who now lives in Highland Park, says she was similarly frustrated by the lack of progress. After the Sept. 11 shooting, she and others called a Sept. 18 gathering -- hosted by "Concerned Citizens of Beltzhoover" -- at the McKinley Park Shelter House.

More than 30 residents attended the gathering, and discussed the need for community unity. "But nobody was there from the BNC. ... [E]verybody is like, 'Where are they?'"

As it turns out, six BNC board members had a meeting of their own on Sept. 18 -- where they voted off Carrington and another board member, Sam Wright. Neither man was present, and neither claims to have known about the meeting at all. On Sept. 21, however, Carrington received a letter from the BNC informing him that he had been unanimously voted off the board for "Conduct unbecoming of a Board Member." The letter provided no explanation, except to cite a provision in the bylaws stating that board members "may be removed with or without cause" by a three-quarters vote.

BNC board vice-president Eric Ford alleges that Wright was removed because he removed the organization's bylaws from its Gearing Avenue headquarters. (Wright staunchly denies that allegation.) As for Carrington, Ford says he is "not at liberty to discuss" his removal, though he says he wouldn't be surprised if a BNC meeting caught Carrington by surprise. "He hadn't been participating" in previous meetings, Ford says. "I could see why he missed some things."

At that Sept. 18 meeting, board members voted for bylaw changes to extend their terms of office; instead of being allowed to serve two consecutive terms of two years apiece, the board voted to increase terms to three years each. Another change enables the board to take action (including amending bylaws) without meeting in person, so long as "all members ... consent in writing."

"Does the BNC have problems? Absolutely," Ford says. "I can understand the community's concern.

"There definitely has to be more transparency," adds Ford, who voted for the Sept. 18 bylaw changes too, according to the minutes. "We're in a rebuilding and restructuring phase."

But trust will be hard to rebuild. Days after Carrington received his letter, Wheadon says she drove past the BNC's offices and spotted two men removing files. "It just looked very suspicious," she says.

Ford says he's unaware of anyone removing documents in September, but confirms that financial and other information has been removed.

"Our building is not safe to keep anything in," he explains, noting that the roof is in very poor condition. "That's why the documents aren't there." Ford says the BNC bylaws are in his possession, while financial documents are with the board president, Dawn Jones King.

That is raising suspicions, too.

"We've got no access to the financial records of the BNC," says Wright, the ousted board member.

"Where is [the money] going?" Wheadon asks rhetorically. "What are you doing with it?"

Ford referred financial queries to King, who largely declined to comment, or to provide copies of financial records. "They're getting the paper involved?" she asked when contacted by CP. "You print what you want to print.

"There's nothing wrong" with the BNC, she added. "I find this [criticism] very disturbing and divisive. They have created a coup."

Residents were hoping for answers on Oct. 23, the date of Rashad Byrdsong's speech. A month before, the BNC had sent out a letter promising the meeting would "give more details regarding the organization."

But when Lipscomb and King told the audience that airing disputes was not part of the agenda, mistrust deepened.

"There's clearly something going on," says Alisha Vereen, a Beltzhoover resident and former member of the BNC's Festival Committee. "They won't give us any answers."

"You can't get a phone call, a flier, a pin-up, a posty-note," agrees Bibiana Hill, another resident. "They're making me feel like there is something wrong."

On Nov. 13, the BNC held an election to fill a half-dozen still-vacant seats on its 17-member board. Some 15 candidates competed, and while results were not available at press time, complaints about that process too were in effect. Critics of BNC say the group provided insufficient notice about the elections: Registration to be on the ballot closed in August, and while the organization sent out a public letter notifying the community, some say it wasn't widely circulated.

"Nobody else but a select few [residents] got that letter," says Jill Evans, who did receive it and was on the Nov. 13 ballot.

City Councilor Bruce Kraus, who represents Beltzhoover and whose office allocated the $2,000 grants to the group in each of the past two years, says he had "no hesitation" earmarking that money for the BNC. Allegations against the group, he says, "were all part of the rumor mill."

Still, he adds, "If there are questions about finances, it would only be prudent to make sure their house is in order before further funding takes place."

Calls to the office of state Rep. Jake Wheatley, who also represents Beltzhoover, were not returned.

Wheadon and Carrington are seeking to bypass the BNC altogether, channeling their efforts into creating neighborhood committees under the umbrella of Carrington's Voices Against Violence.

But other others skeptical of the BNC say their motive is not to destroy the organization. They say it's crucial that the BNC tighten its ties to the community. "I want the BNC to be a functional, legitimate, unified organization," says Hill. "There has to be some kind of unity."

"We don't want the BNC to go," Vereen agrees. "We just want it fixed."