Over the Bar Bicycle Café

Listen. Do you hear it? No? Listen more closely. It's not the deafening roar of motorcycle engines, nor even the self-satisfied purr of fine automobiles. It's a more subtle sound, but getting louder every minute. It's the velvety whirr of bicycle tires gliding over Pittsburgh's roads and trails, punctuated by the clicking of changing gears, pedaled by people you know.

If you follow the sound, you'll probably end up at Over the Bar, the new bicyclists' bar and grill on the South Side. This is an idea whose time has come -- and been a long time coming. Just ask Jason. While hardly a scenester, he was out there -- on two wheels, of course -- looking for Pittsburgh's cycling scene before there even was one. Over the past decade, cyclists have found one another in ever-increasing numbers, and we have witnessed the explosion of cycling culture -- indie, techie, commuter and punk all at once -- with a mix of wonder and satisfaction. And while the 'Burgh's growing bike scene has had its unofficial hangouts, OTB shows that if our city's cyclists don't yet own the roads, they can at least own a piece of the real estate.

That said, OTB (Over the Bar, a pun referring to the ceiling-mounted art above the bar area as well as a frequent path for mountain bikers) isn't just a clubhouse for people in skinny jeans with fixies. The décor celebrates all forms of cycling with wall- and ceiling-mounted bikes and frames: from sleek, razor-thin racers to chunky off-roaders, from banana-seat memories of 1970s childhood to funky original creations by the South Side's own Thick Bikes (whose motto may well be, "If we can weld it, we can ride it"). Even those too young to ride are welcome -- there's a kids' menu and high chairs for the training-wheels and trailer set.

The menu continues the celebration of riding with cycling-inspired names referencing components (onion rings are Big Rings, named after part of a bike's front crank) or local cycling trails, groups and publications (such as the Dirt Rag Delight, a dubious-sounding combination of burger, pickle and peanut butter, whose name derives from a respected local bike magazine). While someone training for the Tour (de France, that is) might look askance at the burgers and other pub grub, OTB's salads are more impressive than most bars', and the menu features vegetarian and vegan options throughout. Not surprisingly, cyclists tend to be a health-conscious bunch.

And it's all quite good. The Spoke Junkie, composed of battered zucchini planks wrapped around melty cheeses, is an original re-combination of bar food staples. Crispy, creamy and best with a scrim of astringent marinara dip, it was a welcome change from more common fried zucchini or mozzarella sticks. More typical, albeit more upscale, was sesame-crusted tuna, doused with a sweet chili sauce, dotted with wasabi and served with Japanese soba (buckwheat) noodles. The rosy-pink tuna was sweet and tender, but the soba, tossed with strips of red pepper and seaweed, were disappointing. Their flavor was dominated by salt, presumably from soy sauce, and added little to the plate. The Big Wheel -- pizza from the kids' menu -- had a crisp but bland crust and a sweet tomato sauce that worked well with the just-browned cheese topping.

Our sandwiches were more uniformly successful. The Pedal Paddle Panini, essentially a caprese salad (tomato, basil and buffalo mozzarella) plus roasted red peppers on grilled bread, was right up Angelique's alley. The fresh flavors from the garden -- even the tomato was credible for this time of year -- played off the mild creaminess of the cheese. The Great Allegheny Passage was a straightforward grilled-chicken sandwich, but the meat was succulent, the provolone a good choice of accompaniment, and we appreciated having our choice of sauces. We picked buffalo, which was hot but not punishing.

Lastly, we'd heard good things about the burgers, and the Off-Roader came through. The patty was big without being unwieldy and cooked just right, juicy and crusty. The Portobello mushrooms and blue cheese on top were classic complements, though Jason found that the mushroom's balsamic marinade fought the burger's other big flavors a bit. Both the burger and chicken came on good-quality hard rolls that were lightly grilled. Sides of French fries and Big Rings were crisply fried, with the black-and-tan beer-battered onions especially savory.

OTB is by and for cyclists, no question, but the food is good enough and the atmosphere welcoming enough that others will enjoy coming along for the ride. Once there, who knows -- maybe they'll even join it. Biking home would certainly help to work off the onion rings. 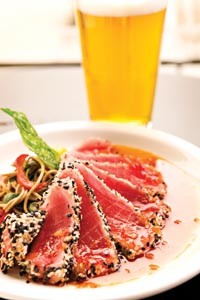