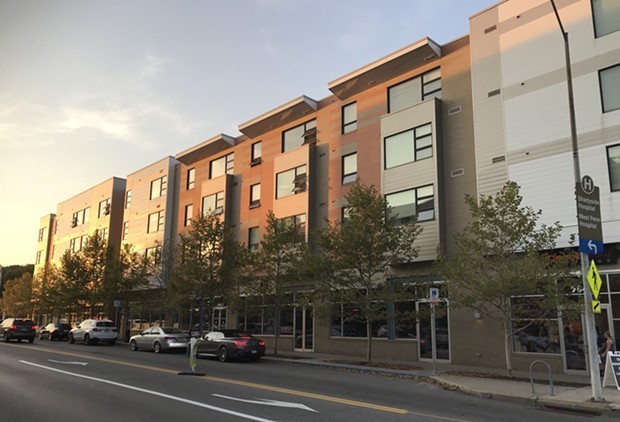 CP photo: Ryan Deto
Mixed-use affordable housing in East Liberty
Thanks to a state agency decision to increase tax-credit allocations, six affordable housing developments in Pittsburgh will be receiving tax credits this year, for a potential total of 185 new, affordable-housing units in Larimer, Hazelwood, Garfield, East Liberty, and the North Side.

The LIHTC program provides tax incentives to create affordable housing units. The six projects — a record high for the city in one year — were supported by over $5 million in preliminary commitments from the Urban Redevelopment Authority of Pittsburgh to provide initial funding.

Pittsburgh Mayor Bill Peduto has previously campaigned for an increase in these tax credits, and in a press release, he thanked Wolf for allocating them to the city.

“[These credits] are the most powerful weapon we have to advance affordable housing in Pittsburgh,” said Peduto in the press release. “Finding housing has been a major issue in the city the past several years, and has become even more burdensome with the economic devastation of the pandemic, so these credits are all the more necessary and welcome.”

Pittsburgh, like many cities, has been struggling with affordable-housing supply as some neighborhoods, like Lawrenceville and Downtown, have been experiencing rapid gentrification. Other areas have benefited from subsidized-housing developments, but without large-scale investments from the federal government, many cities have had to get creative to try to fill the gaps.

Jessica Smith Perry, the URA Director of Residential Lending, says this announcement of funding equates to “millions of dollars in equity committed” to Pittsburgh, but acknowledges that many, if not all LIHTC development deals, still require gap financing from the URA to be completed.

“At a time when the value of the credits is dropping due to shifts in broader economic trends and policies, coupled with increased construction costs and supply chain issues, the URA is doing everything we can to help fill the gaps in the developments and ensure that the affordable units are developed in the city,” says Smith Perry.

In 2017, Pittsburgh created the Housing Opportunity Fund, which provides $10 million a year to help with affordable-housing initiatives. According to a press release, last year, the city fund assisted 230 households with home-purchasing and homeowner assistance, and created and/or preserved 110 rental and for-sale affordable units.

The six projects receiving tax credits this year are: