Out of the Shadows: East Liberty club receives unusual complaints

"All of a sudden, we got all this increased pressure" 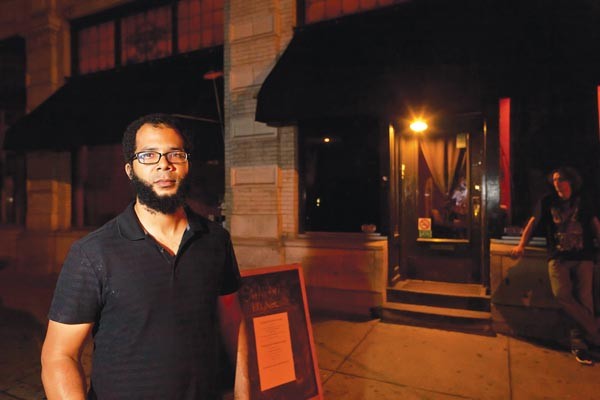 Justin Strong, the owner of East Liberty's Shadow Lounge, says he found a card on his door telling him to call Pittsburgh's Bureau of Building Inspection. The BBI, he says, was concerned that his nightclub — which has been in business for 12 years — might not have the right zoning-board approval for the live music performed there.

The second complaint came almost exactly a month later, via a phone call from an official at the state police Bureau of Liquor Control Enforcement. Strong says it was a "courtesy warning," notifying him that the volume of the music from the lounge might be too loud.

Such complaints are unusual for Strong: The Shadow Lounge has rarely made the Pittsburgh Bureau of Police's radar, says Pittsburgh Police Zone 5 Community Relations Officer Michael Gay Sr. And the state Liquor Control Board has also had no problems renewing the club's liquor license every two years since Strong acquired the license in 2005, according to Stacey Kriedeman, the board's spokeswoman.

In light of that, Strong says the two recent, similar complaints targeting the business are disconcerting.

Neither Strong nor his landlord, Eve Picker — co-founder of the nonprofit cityLab, an organization involved in urban-planning issues — knows for sure the source of the complaints. Picker says Strong is a good tenant whom she would like to keep. And neither the BBI nor the state police will divulge the sources of the original complaints. But although many credit the Shadow Lounge with rejuvenating the Penn Circle area, Strong worries that some people think he may no longer fit into the landscape that he has helped to change.

"What is different now?" Strong asks. "Things just started adding up. All of a sudden, we got all this increased pressure."

Established in 2000 as a coffee shop that featured live entertainment, the Shadow Lounge drew an eclectic following, promoting a wide range of music acts — from artists such as Girl Talk to violinists and fiddlers, and spoken-word artists. It grew into today's space, a non-smoking venue featuring two performance venues with two separate bars, with the support of community groups such as the East Liberty Development Inc., and the backing of political supporters such as Pittsburgh City Councilor Bill Peduto.

Peduto, who says he used to spend a lot of time at Shadow Lounge in its early years to make sure it wasn't harassed by law enforcement, calls the club a "community center," as much as it is a night-time entertainment spot.

"It's the go-to place for a number of political rallies and community meetings," Peduto says.

"They were one of the first people to move into the commercial core," says Maggie Graham, ELDI's communications director. "Justin, when he opened Shadow, he believed in the neighborhood and saw the possibility here."

He wasn't the only one: Then-Mayor Tom Murphy enticed a Home Depot a few blocks away, and in the years since Strong opened his doors, others have recognized possibilities in East Liberty as well.  National retailers such as Home Depot, Whole Foods and Target have moved into the surrounding area. Upscale restaurants, such as Spoon, opened around the corner. Across the street, construction is underway on one of two separate mixed-use developments, slated to open in 2013.

Perhaps inevitably, such interest has stoked fear of gentrification — concern that the black-owned businesses which previously occupied the area might be priced out of it. Ogbonna Moses Onwubiko, for one, suspects that the renovation of the Highland Building, also across the street, may have something to do with the Shadow Lounge complaints. A group led by Walnut Capital Partners is rehabbing the structure to create 127 new apartments and 6,000 square feet of new retail space along Highland Avenue.

"People like us, they don't want us around," says Onwubiko, owner of the Global Food Market on Highland Avenue. He says he feels sorry for Strong, who caters to an ethnically diverse crowd. The developers, he says, are "trying to protect their investment."

But Gregg Perelman, the managing partner of Walnut Capital, says he's not to blame for the complaints.

"I'm not worried about [the club] today. We're not going to be occupying the building until next spring," Perelman says. "I will be worried about it if it disturbs my tenants. But I won't know about that until later."

Neighborhood institutions say Walnut — whose president, Todd Reidbord, serves on the city's planning commission — has little to worry about.

"We've found them to be a very good neighbor," says Pam Kimmel, business manager at the East Liberty Presbyterian Church, which occupies the other side of Baum Boulevard from Shadow Lounge.

Bob Pressley, a security guard who works second shift at the church, says he's been keeping an eye on things for about eight years.

"They laugh, talk a little bit loud. You may hear a little bit of noise," he says. But, "I've never seen any problems over there."

Nate Cunningham, ELDI's director of real estate, is overseeing another redevelopment project in the 6000 block of Penn Avenue that will create 56 new apartments, as well as space for a movie theater and another restaurant. He says he would be surprised if anyone looked on Shadow Lounge as a bad neighbor.

"I'm a little flabbergasted, to be honest with you," he says of the complaints. He calls the Shadow Lounge "a key part of the neighborhood."

If it had, a citation would have been issued. As of mid-August, Strong says he hasn't received notice of any citations.

Mary Fleming, BBI assistant director, says the department's records show that although Strong may have received zoning-board approval in 2005 to change his property's designation from that of a limited restaurant to that of a general restaurant (permitting live entertainment), he may not have finished the process by paying the fees for the occupancy permit to be officially issued.

She says BBI plans to work with him to get the issue resolved, and has no interest in shutting him down for such an oversight. She says the department has not had any other problems with the club.

In theory, the complaints, if they continue, could lead to the attention of the Nuisance Property Task Force, a joint effort by the city and Allegheny County District Attorney's Office. But both Pittsburgh Police Commander Cheryl Doubt, who oversees nuisance properties, and Mike Manko, spokesman for the District Attorney's Office, said the Shadow Lounge is not on anyone's radar.

Peduto says he is not aware of any developing tensions between the club and others in the neighborhood.

"It would be a shame to see the success [Strong] hoped to build to be a reason for others to force him out," Peduto says.

Strong says he's doing what he can to address BBI's concerns and keep his i's dotted and his t's crossed. He says he is considering re-arranging space in the Ava Lounge part of the Shadow complex, which fronts Highland Avenue, and adding noise-reduction curtains. He is also working with the BBI to figure out what zoning issues may need to be addressed.

The Shadow Lounge, he says, is a one-of-a-kind venue for local artists, one he intends to keep going as the neighborhood evolves.

"I'm going to take advantage of what's happening," he says. "If they'll let me."

Editor's note: An earlier version of this story misspelled the name of Gregg Perelman.