Out of the Office

Verona's mayor spends much of the year living someplace else 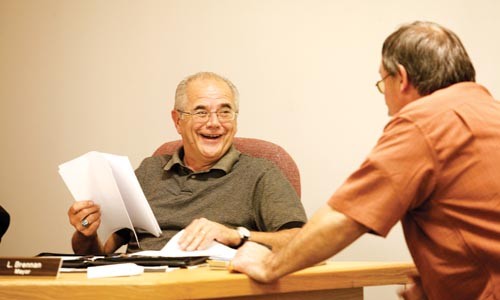 "You can't fight city hall," the old saying goes. But usually you can at least find it. In Verona, you often can't -- or at least not the guy who runs it.

"Hey, Mark, do you know who the mayor is?" Jonette Caldwell yells to the back of Patsy's Market, the Italian grocer she owns on Center Avenue, in Verona.

"Do you know where he lives?"

"I heard he lives out of state."

So have many other Verona residents. In July, a City Paper cover story reported concerns about racial tension in the borough [City Paper, "Showing Colors," July 31, 2008]. Since it was published, the story's claims have been hotly debated in the community. But while residents disagree about the racial issues in Verona, many say that in recent months their mayor hasn't been around to keep tabs on the town's daily functions. In fact, in the past year, Mayor Leonard Brennan has spent almost as much time living in Arizona as he has in the small town he represents.

"I don't think that's right," says Petitto. "How can you run a town when you're not here?"

Brennan has served as mayor of the 3,000-resident borough of Verona -- located between Penn Hills and Oakmont -- for the past 16 years. And the 63-year-old doesn't deny that since he retired last October, he's spent much of his time living in Arizona, as well as in his trailer home in Butler County. He no longer owns a home in Verona, having sold it in June -- though he still maintains a Verona address at his in-laws', where he lives periodically.

There's nothing illegal about that, but residents say it's confusing.

"Nobody knows what's going on," says resident Sarah Golem. "Who's running our town?"

Sitting in his small borough office, which he shares with Verona's police chief, Brennan speaks candidly about his "extended vacations." He acknowledges having spent four months in his Arizona home last winter. And during the summer, he says he spent much of his time in his trailer in Butler County, while occasionally coming back to his in-laws'.

"I can understand people's concern when I'm not here," Brennan adds. "But that's because they're ignorant of the fact that the mayor doesn't have to be here."

In fact, despite the concerns of residents, Brennan says he plans on spending this winter in Arizona again. "I retired," says Brennan, who worked for 32 years in an Oakmont steel mill, and for the past 10 years at the Pennsylvania Turnpike. "I want to live my life, too."

Some residents say they expect more from an elected official.

"I don't think it's morally right" that he doesn't live in Verona year-round, says Mariann Brayer, who notes that residents have voiced concerns about Brennan's absence during past council meetings. "I think it is a disservice to the people who voted for him."

"You've got to be here," Golem agrees. "He can talk on the phone, but that's not the same as living here and seeing what's going on."

Legally speaking, Brennan isn't doing anything wrong, says Courtney Accurti, communications director for the Pennsylvania State Association of Boroughs. State law requires mayors to maintain an address in the town they represent, but it says nothing about how much time they have to spend there. "The community would probably appreciate it if he were there," Accurti allows, but other than using the ballot box, "voters don't have the right to remove [mayors] because they haven't been around."

Besides, says Accurti, the mayor of a small borough like Verona doesn't wield the same influence as the mayor of a city like Pittsburgh. In a borough, most of the decision-making power rests with council. A mayor's primary responsibility is to oversee the police department.

"I've seen a few mayors who have come into office thinking that they are a city mayor -- that they get to do everything that [Pittsburgh Mayor] Luke Ravenstahl gets to do," says Accurti. But in a borough, the mayor can't even vote on a measure, unless there is a tie that needs to be broken.

Other than monitoring the police, Brennan says he must complete a report to council each month, which outlines the money the town has received from the magistrate, as well as arrests and fines in the borough. Most of his responsibilities can be handled over the phone, he says: "The bottom line is, as long as I have contact with the [police] chief, there is no problem. If there is a problem, the chief calls me."

"It's not a big deal" that Brennan isn't around all the time, borough council member Peggy Suchevich agrees. "He does not have to be at council meetings."

According to Brian Jensen, senior vice president of the Allegheny Conference on Community Development's Local Government Function and Structure Program, Verona's situation begs the question: "What does [the mayor's office] mean?"

Jensen says the state's borough structure can be troubling, especially when powers are separated between council and the mayor. Often, he says, their duties are interconnected. For example, mayors are in charge of managing the police, while council presidents are responsible for managing parks and recreation programs. Since after-school programs can help keep "at-risk" kids out of trouble, there is a public-safety component involved that would benefit from the input of the mayor.

"If the mayor and council president do not coordinate, a borough may not be as effective as it could be in mitigating police issues," Jensen says.

Jensen says the state would be wise to reconsider the borough structure to maximize efficiency.

"Pennsylvania has established a local-government system that structurally ... may not be the best way to address challenging problems," he says. "They've created a degree of division within the management structure of boroughs, and we ought to be looking at that.

While Brennan may not wield much power in Verona, Golem says he should still be walking the streets and taking the borough's pulse regularly. She says she doesn't understand why Brennan didn't just resign his mayoral post when he retired from his job last fall. The mayor's job is unpaid, for one thing. And this way, she says, "At least we would have somebody in charge of this little town."

But Brennan says there's no reason to surrender his office, which is up for re-election next May.