Out in the Open: LGBT issues are playing a role in this election, and the outcome could determine if it ever happens again | News | Pittsburgh | Pittsburgh City Paper

Out in the Open: LGBT issues are playing a role in this election, and the outcome could determine if it ever happens again

"Republicans feel they have to jump on the bandwagon of discrimination. I don't care to be on that ride." 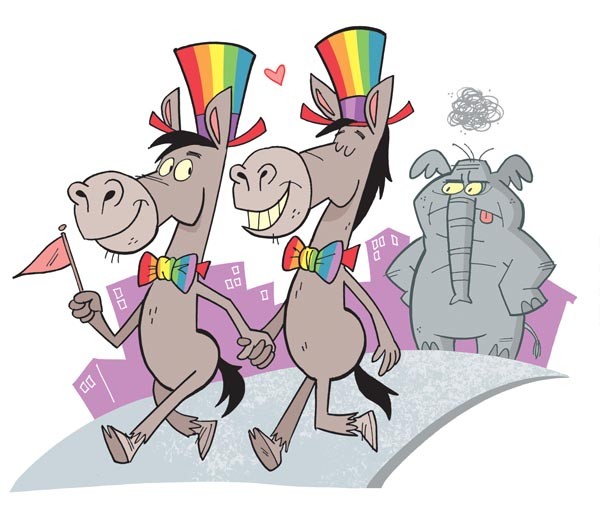 As Brian Sims watched President Barack Obama endorse same-sex marriage from his cell phone on an Amtrak train, a hand tapped his shoulder and a voice asked if he was OK.

"I was sobbing," said Sims, a gay activist in Philadelphia. "I didn't think that'd affect me like it did."

As a gay Democrat, Sims was already on board with Obama. But the president's May 9 interview with ABC News' Robin Roberts — in which Obama stated he believes "same-sex couples should be able to get married" — bolstered Sims in his support.

Many observers and polls agree: The gay-marriage issue won't make or break this election for either Obama, Republican challenger Mitt Romney or a majority of voters. But it is playing a role this time around. For Democrats, it's been a unifying issue. For Republicans, it is becoming — probably for the first time — a divisive subject.

"The way that marriage has come into the 2012 election really shows how mammoth of a shift we've had in the politics around this issue," says Lanae Erickson Hatalsky, director of social policy and politics for the moderate think-tank Third Way, which has formed the bipartisan Commitment Campaign to persuade moderates to support gay marriage. "Just eight years ago, we were in a situation where every politician was running away from support for marriage."

Obama himself has acknowledged that his announcement may come with political implications. In his interview with Roberts, he acknowledged that, "in some places that are going to be pretty important in this electoral map, it may hurt me."

But how much LGBT issues affect voters — or how much either campaign touches on them — remains to be seen. Neither the moderators nor the candidates made mention of same-sex marriage or other LGBT issues during early debates.

In a May 10 USA Today/Gallup poll, one day after Obama's interview, 60 percent of Americans said his decision made no difference in their vote

"If it was going to take center stage, it would have been when the president announced his support or when Democrats added it to their platform," says Hatalsky. "For most voters, this isn't their biggest concern this election, or even their fifth-biggest concern."

If it does become an issue, Hatalsky believes Republicans would have to go even more anti-gay than their platform, like pledging to reinstate Don't Ask, Don't Tell.

"The reason [Romney] hasn't done that is I think Republicans realize that for that chunk of voters in the middle," Hatalasky says, "it would be a real bridge too far."

For now, its impact has been more personal. For Sims, "It meant that the most powerful, civil, political person in the world supports my rights. ... It meant so much to me in an ideological way."

Regardless of tangible votes, support for same-sex marriages hit a milestone when the Democratic Party adopted marriage equality for the first time into its party platform. Obama's campaign, meanwhile, kicked off "Obama Pride" to court LGBT voters and volunteers on Harvey Milk Day, in May.

"It put the party on record in a historic way," says Evan Wolfson, founder and president of the Freedom to Marry campaign. "It doesn't mean every single Democrat [supports gay marriage] but it does tell you the party is pointing ... toward the right side of history."

For Sims, who's poised to become the state's first openly gay state-level lawmaker (he's running unopposed for state representative in Philadelphia's 182nd district), "Now there's just one big, extra-shiny, fat object we can be empowered by."

For Steel City Stonewall Democrats, the city's LGBT political group, this fall has been one of its most active, from door-knocking and volunteering out of Obama's South Side headquarters to turning out large numbers at a watch party for the first presidential debate. Group president Jim Sheppard attributes that, at least in part, to Obama's personal stance on marriage.

"We all kind of knew the president was on our side. But he had to come out in a way," Sheppard says. And when Obama finally did, "It was just, ‘Wow. Now we have to fight for this guy.'"

Obama does have a decent track record when it comes to LGBT issues. He led a repeal of Don't Ask, Don't Tell; expanded federal hate-crime law to make it a federal offense to attack someone on the basis of sexual orientation or gender identity; and decried the Defense of Marriage Act  — which defines marriage as being solely between a man and a woman — as unconstitutional.

But his record isn't perfect. Gay-rights groups criticized the administration this spring, when he refused to sign an executive order to prohibit federal contractors from discriminating on the basis of sexual orientation or gender identity.

Gay-marriage advocates and Democrats are quick to describe the President's outlook on LGBT issues as "evolving" and say he's made substantial progress.

"I think President Obama has been extraordinarily strong and a champion of gay inclusion," says Wolfson. "He hasn't done everything on the timetable that advocates like me wanted, but he has delivered from the very beginning and is now exactly where he needs to be in championing the freedom to marry and to end discrimination."

Favorability for gay marriage, meanwhile, has shifted since 2001, with almost half of Americans saying it should be legal, according to data from Gallup. And since 2004, Hatalsky points out, marriage has gained 17 points in support. "In 2004, not even a majority of Democrats supported it," she says. "It's really a solid chunk of the constituency who have just changed their view on this issue."

But Democrats aren't the only ones affected by LGBT issues. For Republicans, same-sex marriage is making its own mark on the party — for better or for worse. While the GOP's platform includes language that defines marriage as only between a man and a woman, fissures are forming in the party around the issue.

"Over the summer we saw Democrats congeal, solidly supporting marriage, and it's comfortable and no longer a touchy issue," says Hatalsky. But for Republicans, "we're seeing some tension there."

Hatalsky points to several examples. The GOP's platform committee, for one thing, voted on supporting civil unions. The measure was struck down, and instead of taking a step toward inclusion, the party adopted what's considered its most anti-gay platform to date. But that they took a vote at all, Hatalsky says, is progress.

In New York, a same-sex marriage bill passed with support from four Republicans in the GOP-controlled Senate in June 2011. State Sen. Roy McDonald, one of those lawmakers, lost his primary and eventually conceded in September to Republican Kathy Marchione, who targeted his support for the bill.

In the state of Washington, Republican Rep. Maureen Walsh, whose daughter is a lesbian, has became one of marriage equality's biggest public allies after making an impassioned speech on the floor of the legislature in February supporting the state's gay-marriage bill.

"It's certainly not the most comfortable vote I've ever taken as a Republican in my life, but I also think it's the right one," she tells City Paper. "I'm really disillusioned by the fact more people in my party haven't embraced this as an issue of liberty and freedom."

As for how it'll affect who Walsh votes for in the presidential election — she's not committed to either candidate yet. While she is considering Romney based on his fiscal policy, "it is very difficult for me to support people that come out so strongly against equal rights."

Her ambivalence is not unwarranted. Romney has a long, somewhat complicated history with LGBT issues. According to an April Los Angeles Times profile of Romney, the governor used the approval of same-sex marriage by the Massachusetts Supreme Court to "pivot" himself further to the right on the issue. According to his website, "marriage is ... critical for the well-being of a civilization. ... [I]t is so important to preserve traditional marriage ... [between] one man and one woman." It also indicates that Romney would defend DOMA and lead the charge for a constitutional ban on same-sex marriage.

That seems to be counter to promises and statements Romney made when running for the U.S. Senate in 1994. According to the Times, Romney supported civil unions and wrote in a letter to supporters, "We must make equality for gays and lesbians a mainstream concern."

Walsh says she doesn't know what it will take for her party to back away from its opposition to gay marriage.

"I suppose it's going to take the Supreme Court of our land to finally just say this is discrimination pure and simple and we need to fix this," she says. "I don't know if it will necessarily change their viewpoints. ... I think people will adjust to it and realize, "Gosh, maybe those gay people don't do anything to affect my heterosexual marriage.'"

Walsh, who's up for re-election in her district, says reaction to her support of the state law has been mixed.

"I don't think my party is mad at me. A lot of people in my caucus embraced me after my speech," she says. "On many occasions I've taken a tough stance on things that I just don't agree with in the Republican platform."

But Walsh admits she's been "beat up" in the campaign over the issue. Her opposition, Tea Party Republican Mary Ruth Edwards, entered the race due to Walsh's vote, and pledges on her campaign website to repeal the law.

Walsh doesn't balk at the fight, saying part of being an elected official is being reasonable and considering both sides — not just toeing the party line. "In this particular case, it'd be politically expedient to be a ‘no' on this. But you know what, I'm not sure I could live with myself."

She also says she doesn't believe the GOP should be content living any longer with its stance on LGBT issues. Walsh says she honestly believes the Republican Party is one of acceptance.

"I truly believe that's the party we are," Walsh says. "It's disconcerting for me that so many Republicans feel they have to jump on ... the bandwagon of discrimination. I don't care to be on that ride."