Our Town at Pitt Stages 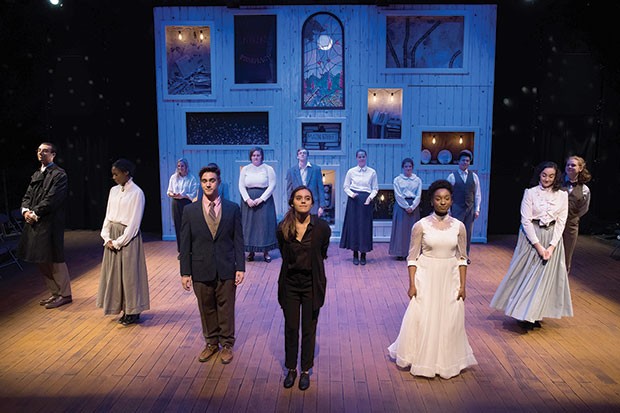 Photo courtesy of Samantha Caun Photography
The cast of Our Town, at Pitt Stages

I wonder what director Ricardo Vila-Roger would have done if I’d shown up at his rehearsals for Thornton Wilder’s Our Town at University of Pittsburgh Stages and changed his direction: putting the actors in period-appropriate clothing, perhaps reverting the random lines he translated into Spanish back into English, or maybe helping the cast understand that every character in the play was born in the 1800s and wouldn’t be striking poses and attitudes from 21st-century sitcoms.

I imagine Vila-Roger would have tossed me out on my ear. And yet any such alteration of his work would pale in comparison to what’s he’s done with Wilder’s. Vila-Roger has had no compunction taking Our Town and deciding he’d … what? Make it better? More relevant? Speak to the iPhone generation?

We should not demand that great works of art adapt themselves to our little lives. Great work insists that we inhabit its world as a way to examine our own. Our Town, a masterpiece, shows us the small comings and goings in a tiny New Hampshire town, and from its intense specificity, it illuminates the chaos of the universe and the infinitesimal nature of being. Our Town implores us to recognize that life doesn’t need meaning or purpose or bigness to be precious. Vila-Roger seems to have been so focused on making his voice heard he’s all but obliterated Wilder’s.

I regret sounding so harsh: Vila-Roger is an actor with an impressive résumé of astonishing performances, and when it comes to bulldozing a playwright’s work, I’ve seen far worse and far more arrogant. But I felt cheated sitting at an Our Town having nothing to do with Thornton Wilder.

It’s a large cast set adrift on stage, and while all of them work in a loud, nuance-free comedy style at odds with the unadorned melancholy of the script, Julia de Avilez Rocha brings a compelling, engaging presence as the Stage Manager, and Maya Boyd is sincere and deeply moving with Emily’s third-act catharsis.

I appreciate that Vila-Roger is a highly skilled theater artist looking to make a statement. But to quote Edward Albee’s take on visionary directors: “Write your own damn play.”

Peter and the Starcatcher at Pitt Stages

Our Town at Pittsburgh Public Theater