Our Presidential Candidates Have Issues

... But good luck figuring out what they are

If you search for the words "legislation," "policy" and "substance" in the past year's campaign coverage, what turns up is a pile of articles mostly lamenting their absence. ("Why, many Americans are asking, are the presidential candidates yammering about so many nonissues?" asks The Columbus Dispatch in a Jan. 16 editorial.) While the media has certainly been derelict in its analysis of what the candidates have actually done, beneath this negligence lies a dirty little secret: Candidates don't necessarily relish coverage of their deeds, especially during election campaigns.

We know this because we spent two weeks trying to get the campaigns of the leading candidates of both parties to detail their most significant legislation or policy initiatives. None even called us back.

This was not what we expected.

Our project began, naively enough, after we read a challenge from a respected elder statesman of political coverage. On Jan. 4, Charles Peters published a column in The Washington Post titled "Judge Him by His Laws." The piece made the case that Barack Obama is no lightweight when it comes to policy matters, and that he has the chops to get things done.

"People who complain that Barack Obama lacks experience must be unaware of his legislative achievements," Peters wrote. "One reason these accomplishments are unfamiliar is that the media have not devoted enough attention to Obama's bills and the effort required to pass them, ignoring impressive, hard evidence of his character and ability."

Peters advances the novel idea that candidates' actual behavior in office -- the laws they write and/or sign, the techniques by which they get them passed -- says more about their character than, say, the campaign commercials they approve or the amount they pay their barber. The thing that distills a candidate's essence is the "heart and soul" bill -- "the one for which a legislator gives everything he or she has to get passed," Peters wrote, "has long told me more than anything else about a person's character and ability."

Near the end of the piece, Peters, who once served as a West Virginia state legislator and went on to found Washington Monthly magazine, challenged the press to subject the other candidates to the same scrutiny, to report on their "heart and soul" legislation.

So we took up the challenge. In fact, we thought it'd be a cinch. Much of what politicians do is tallied in official records and archived on the Web, and various reporters highlight and analyze these happenings as a matter of course. Hillary Clinton, for one, plied her trade for years in New York, the most media-dense place on the planet. We figured it would be a simple matter to stir through the coverage, pluck out the meaty bits, extract a pinch of spice from some bushy-tailed campaign aides, and serve up a pot of the candidates' most substantive accomplishments.

What we found instead was a thin gruel of interest-group pandering, gelatinous pronouncements and chunks of pork.

Peters, 50 years more experienced than us, reveals a hidden agenda behind his challenge.

"I have to admit," he says over the phone from his Washington, D.C., digs after we inform him of our failure, "that when I wrote the line about inviting you all to compare them with [Obama], in the back of my mind was the idea that you weren't gonna find much, and that would be a story."

A search through Internet archives confirms Peters' column. As a state senator in Illinois, Obama did labor mightily and shrewdly to pass a first-in-the-nation bill requiring that police videotape interrogations of suspects in murder, rape and other major criminal cases. Beginning shortly after his 1996 election, Obama teamed with fellow Chicago legislator Monique Davis to introduce the bill. For the next six years they fought to pass it, convincing fellow Democrats, tough-on-crime Republicans and even most of the state's police departments.

The 2003 Illinois law became a model for other states. Obama's tenure in the U.S. Senate is relatively undistinguished in terms of legislation, but a two-year freshman wouldn't have a lot under his belt, presidential ambitions or no.

Hillary Clinton's Senate Web site lists every bill she sponsored in her first five years in office, but a scroll though the bill titles, and even their texts, reveals little sense of what any bill really meant to the senator or anyone else. It's tempting to take one, S.2273, "A bill to reliquidate certain entries of tomato sauce preparation," and dissect it as a paragon of the Clinton style. It is obscure, pinpointed and wonky (it attacks some undefined tariff provision), and in 2002 she introduced it no fewer than 16 times (it did not pass). But despite her persistence, S.2273 is clearly not Clinton's "heart and soul" legislation. To find that one must go back seven years before she became a senator, to 1993, when her husband named her to head a task force on reforming health insurance.

The so-called Hillarycare plan of 1994, now, as then, denigrated by self-described conservatives as "socialized medicine," was no such thing. Though little understood by those who reported on it at the time, central to the 230-page plan was an implied $20 billion contract for the top five private health insurers (which called themselves "the Alliance for Managed Care") to cover the 37 million uninsured.

Designed to hold down costs without challenging the forces that waste health-care money in the United States, Hillarycare was to be a public/private partnership between the federal government and the industry's biggest players. Her plan was torpedoed by the dozens of smaller insurers who were not guaranteed a piece of the pie. Their industry group, the Health Insurance Association of America, created and funded the infamous "Harry and Louise" TV ads, which (aided by more than $100 million spent by other opponents) erroneously convinced millions of Americans that the plan amounted to a government takeover of health care.

In important ways, the Hillarycare episode epitomizes the Clinton style. The plan was dense, extraordinarily complex, and tuned to a collaborative, evolutionary arrangement between the largest established forces. Its failure taught the Clintons to respect power and money even more than they already did, and Hillary Clinton went on to become the second-largest recipient of health-care industry dollars in the Senate. "I learned some valuable lessons about the legislative process, the importance of bipartisan cooperation and the wisdom of taking small steps to get a big job done," she said during a speech in 2005. But in the end she has become even more conciliatory toward those with power, even less interested in the bold stroke, so it is perhaps unsurprising that neither her campaign nor her Senate staff offered any comment to this newspaper when we inquired after her "heart and soul" bills. 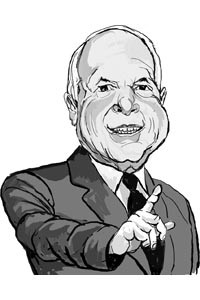 John McCain earned his "maverick" reputation in 1994 when he tapped Sen. Russ Feingold, a liberal Democrat from Wisconsin, to work with him on campaign-finance reform. Although he's also been an impressive collector of special-interest money (most notably from the telecom companies), McCain has passed real reform legislation, most especially the McCain-Feingold campaign-finance reform act of 2002.

McCain, a hawkish Republican who once relished comparisons to the legendary conservative (and failed 1964 presidential candidate) Sen. Barry Goldwater, began his transformation by reaching across the aisle to Feingold. Although the two did not see eye-to-eye on government spending, they agreed that unlimited spending by political action committees had corrupted Congress. They took aim at this so-called soft money because it was then the least-regulated and widest spigot through which corporations, industry groups and unions could funnel cash to legislators.

The bill attracted fierce opposition, mostly from McCain's own party, but the pair soldiered on through more than six years of defeat. The first version died in 1996 when they couldn't overcome a Senate filibuster; the last nearly got waylaid by a weaker bill floated by a corrupt Ohio congressman. McCain and Feingold used their bully pulpits to finally get it passed in 2002, but even Feingold agreed that McCain deserved most of the credit and took most of the political risk.

McCain's hard work earned him a reputation as a different kind of Republican and taught him that working with opponents to pass popular legislation can vault one to national prominence.

Although he is sometimes pegged as a one-dimensional "evangelical Christian," former Arkansas Gov. Mike Huckabee has lived his faith in ways that confound stereotype. To do this he has fought -- and beaten -- some in his own party.

Huckabee's "heart and soul" legislation centered on children's' health care and education. In 1997, Huckabee introduced ARKids First, a health-insurance program for poor children. This was surprising enough in a state dominated by paleoconservatives, but he raised the stakes a year later, deciding that all the state's proceeds from its tobacco-industry lawsuit settlement should go to health education, anti-smoking campaigns and Medicaid expansion, a Republican bugbear. When his own party blocked the tobacco plan in the state legislature, Huckabee put it before voters, and the referendum passed 2-to-1 in 2000.

Huckabee sees no conflict between his faith (or party) and measures like ARKids First, or leveling a 1999 tax increase to fix the state's Third World highway system, or opposing a state legislator's bill to deny state services to illegal immigrants. "I drink a different kind of Jesus juice," he said in 2005, in criticizing that bill.

None of the candidates profiled here satisfied calls or e-mails requesting comment for this story.

Still, these candidates are all human and, as such, subject to the passions and ambitions that drive strong leaders. The paucity of stories about these dramas -- particularly those that most reveal their behavior while actually on the job as public officials -- reveals the failings of the media more than any flaws in the candidates' characters.

"There are two reasons," he says. "One is that many reporters just automatically assume that substance will be boring to their readers, or to them ... and [two], I think there's an intellectual insecurity in dealing with substance. It's easier to be glib about the horse race. It was ever thus."

Edward Ericson Jr. is a staff writer for Baltimore City Paper, where this article first appeared.