The pop group shines in "the Mormon moment." 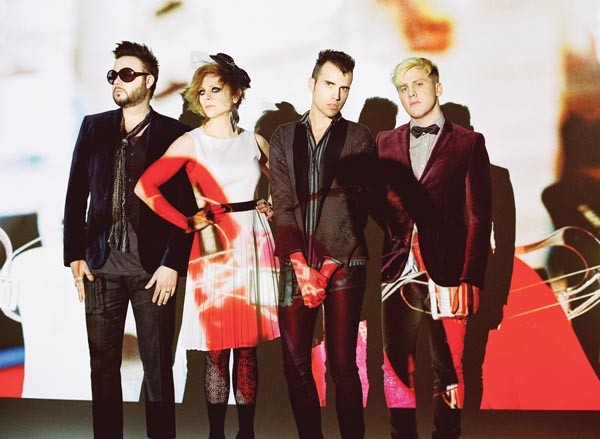 with WALK THE MOON and 21 PILOTS.

Fame. When David Bowie reports from the path of excess, he's a jaded show-biz insider, his cautionary tales only stoking the desires of the un-famous. When Neon Trees take up the theme, in their song "Hooray for Hollywood," it's another matter. Despite successful singles and albums, the band seems destined to remain outside.

The members of Neon Trees, after all, come from the Church of Jesus Christ of Latter-Day Saints — a culture seemingly at odds with rock 'n' roll. Unless these outsiders become insiders in what some are calling "the Mormon moment" — with some LDS members poised to seize the highest chart positions, and another hunting the highest office in the land.

Neon Trees formed around 2004, when neighbors Tyler Glenn (vocals and keyboards) and Chris Allen (guitar) relocated from California to Provo, Utah, soon to be joined by Branden Campbell on bass and Elaine Bradley on backing vocals and drums. A connection secured Neon Trees a tour opening for The Killers, who also helped sign the band. (Killers frontman Brandon Flowers is lately outspoken about his Mormon beliefs; see sidebar, "Do Mormons Rock?")

Habits, the band's catchy 2010 debut, scored with singles like the nostalgic rocker "1983" and the double-platinum "Animal," which made No. 1 on the Billboard alternative chart. Yet the album opens on a pensive note: Glenn picking at the piano, asking whether someone "born to make a mess" can come clean and deserve love. "I break habits just to fall in love / But I do it on designer drugs," he sings. "You can call me dangerous / But these are the sins, the sins of my youth."

The band's April release, Picture Show, suggests a Tinseltown theme, but the sophomore effort is hardly a concept album.

"We're definitely not trying to make Pink Floyd's The Wall here," says bassist Campbell, speaking via phone from the road. He sees the songs as immersive escapes, similar to when the house lights dim in the multiplex. "We try to paint a picture, taking the listener somewhere."

And "Hooray for Hollywood," Campbell says, is less about the city than a sarcastic comment on the banality of the fast life available everywhere. "It can be in the middle of Kansas," says Campbell, who originally hails from Las Vegas. "Or Pittsburgh — you know, quarterbacks that wreck their motorcycles."

The Picture Show songs often began with Glenn bringing in a demo sketched out with a drum machine and simple keyboards, which the band helped bring to life.

"It's almost like Pinocchio, where it's a wooden puppet, and we help it become real," Campbell explains. "The songs become 'real boys.'"

In general, the puppetry does give way to magic: "Teenage Sounds" sounds real enough, with insistent rhythms and brawling guitars; in a darker vein, "Trust" nods to New Order and Depeche Mode. "Weekend," on the other hand, sounds more like an animatronic Michael Jackson.

Apart from the odd reference to salvation and the devil, Picture Show doesn't proselytize; the album won't come knocking on your door. (Such music does exist, however; "LDS artists" may specifically emphasize spiritual and uplifting messages and gospel themes, says Campbell.)

"We've never considered Neon Trees to be a 'Mormon rock group,'" he adds.

That may be true — but they've let people believe it. Articles in the Deseret News (an LDS-owned newspaper founded in 1850) emphasize the band is "made up entirely of Latter-Day Saints." The group also has a profile on a "Mormons in Music" website, www.mormonmusic.org.

In Provo, and on its campus of Brigham Young University, Neon Trees has plenty of fans, says Eric Severson, a recent graduate. As with other Provo groups that have achieved success outside, "there's a little self-identification and pride there."

At BYU, Severson ran the "Rock and Roll Appreciation Club," a now-defunct student organization he describes as "like a book club, but for albums." Its 15 to 20 members met weekly to discuss albums, play the game Rock Band or watch Spinal Tap.

Although Severson has recently severed ties with LDS, he's sympathetic — he was raised in the church and served a two-year mission, and is now pursuing grad school.

"Within the church there's a bit of a fear of celebrity," rather than specific fears about listening to or creating rock 'n' roll, Severson says. "You just don't want to get carried away with the lifestyle." (Or, say, wreck your motorcycle.) Music resources on the official LDS website suggest that lyrical content and theological aspects are matters of individual conscience. The clean-living Mormon lifestyle, with abstention from coffee, alcohol and tobacco, on the other hand, seems to operate as a cultural identifier.

Technically, a Frappuccino isn't one of the "hot drinks" (coffee and tea) proscribed by founder Joseph Smith, but it's pushing a line. Even non-Mormons may take issue with the particular brand; when Nick Cave sings, "I woke up this morning with a Frappuccino in my hand," it's bitter proof that his "moral code got jammed."

Perhaps Neon Trees currently downplay their Mormon roots to avoid alienating their growing mainstream audience. Severson notes "a fear in the Mormon community of media scrutiny. … It's a church with a lot of troubled background," and Mormon musicians risk being misunderstood.

Or perhaps it's that the members' devotion is looking more tenuous. According to Campbell, guitarist Chris Allen left the church a couple of years ago. "It's something that everyone is living on an individual basis," Campbell says. "We're not a church rock group."

Yet membership has its perks. "I love being part of the church and going throughout the world," he says, recalling a show in Korea. "We're playing in the middle of Korea, and some fans hold up BYU signs that they made.

"We're across the world, and there's a connection — an even deeper connection than the music."