Our critics highlight some of 2009's notable theater, dance and visual art.

When people think about theater, they tend to think big: huge sets, lavish costumes and scores of actors. If there isn't a giant chandelier falling from the ceiling or an army of French revolutionaries, what's the point of Broadway? But this year, Pittsburgh theaters proved the virtues of thinking small -- in this case, with tiny casts. Some of the best productions of the year featured no more than three actors onstage. This was all the more impressive when big-budget companies took chances on terse, intimate dramas.

Blackbird (City Theatre). A damaged man has an affair with an underage girl. Years later, just when he thinks he's paid for the crime, the girl returns as a young woman. Their awkward, tempestuous relationship stunned local audiences, and City should be commended for taking on David Harrower's difficult drama. Double props to Robin Abramson and Steve Pickering, for living up to such complex roles.

Breaking Up (No Name Players). Boy meets girl, boy and girl break up -- and then the sex really gets good. Michael Cristofer wrote Breaking Up back in the 1980s, but commitment phobias never get old. As performed by Tressa Glover and Jody O'Donnell, this breezy script became a lively relationship dramedy. Breaking Up continued No Name's tradition of hip, energetic theater.

Ella (Pittsburgh Public Theatre). There were a number of daring solo shows this year. Ella was not the best script or concept, but for sheer personality, Tina Fabrique stole all these shows as Ella Fitzgerald. Fabrique (and her backing band) filled the voluminous O'Reilly Theatre with her voice and liveliness.

Crime and Punishment (Pittsburgh Irish & Classical Theatre). My vote for the best production of the year goes to Crime, thanks to Curt Columbus' heartrending adaptation of Dostoyevsky's classic detective novel. Rarely has a trio appeared to have so much fun with such dreary content; set against a harsh industrial set, Larry John Meyers, Susan Goodwillie and Joel Ripka created an even coarser existential landscape. Running only 90 minutes, Crime left lasting impressions for those lucky enough to see it.

Doubt (Pittsburgh Irish & Classical). It takes chutzpah to produce a play when the movie version is circulating in national cineplexes. But PICT did just that, and Doubt was still an undoubted success. Meghan Heimbecker, Maria Becoates-Bey and the inimitable David Whalen starred in this Pittsburgh premiere of John Patrick Shanley's shattering drama.

After a sprawling quadrennial art-glut rolls through town, with piggybacking shows peppering its neighborhoods, one might expect our modest burg to lean back and breathe. This list acknowledges those sites, curators and artists who powered through the morning after like men and women on a mission.

• Newly appointed Andy Warhol Museum curator Eric Shiner's debut, The End, scoffed at the recession-induced sizing-down at many major museums, pulling off an international survey that was understated and substantial. My favorites included Trevor Paglen's list, alphabetical and drily presented, of declassified U.S. military-operation code-names, and Raymond Pettibon's characteristically enigmatic ink drawing of a baseball player in the throes of self-doubt.

• Opera for a Small Room, at the Carnegie Museum of Art, was a fitting choice for a fatigued institution's day of rest and reflection. The eerie, compact installation, by Janet Cardiff and George Bures Miller, was really only a sort of decorated hovel (with audio, etc.). But in a stroke of curatorial cleverness, it was set square in the middle of an otherwise dark, barren and vast exhibition space. Thus it took advantage of the discomforting desolation of the abandoned home of Life on Mars to reinforce the artists' characterization of the hovel's reclusive, obsessive phantom occupant.

• In the second-to-latest installment of the Mattress Factory's Gestures series, Gestures 12, curator Katherine Talcott brought together a diverse crowd, mostly locals and not all self-described artists, to exploit the structural particulars of the museum's annex building. I found myself noting the tactility of the show, with even wispy fiber art or subtle robotics owning the space it was placed in.

• Carnegie Mellon's Miller Gallery continued its recent trends with Experimental Geography, drawing again from the well of intersecting cultural studies and social practices. This time, guest curator Nato Thompson assembled a show featuring exemplary feats of data-visualization, conceptual land-art and urban anthropology, to name a few, and impressively managed to glean a strong collective resonance out of the multidisciplinary hodgepodge.

Three (Batsheva Dance Company at Pittsburgh Dance Council). One of the world's top contemporary dance companies, Israel-based choreographer Ohad Naharin's troupe presented a vision of natural beauty expressed in the "multi-dimensional" movement style he calls "Gaga" ... which is how it left audiences feeling.

Passion Reflected (Attack Theatre). The troupe showed again why it's a local favorite in a program with works inspired by the Carnegie Museum of Art's Life on Mars exhibit and composer Manuel de Falla, along with a stellar collaboration with Los Angeles-based singer-songwriter Katie Costello.

The Rite of Spring/Prelude to Afternoon of a Faun (Compagnie Marie Chouinard at Pittsburgh Dance Council). Two of the Montreal-based company's most beloved works, the program showcased Chouinard's brilliantly quirky choreographic interpretation of the Nijinsky classics. 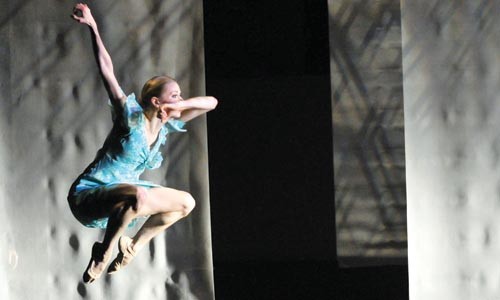 Light/The Holocaust and Humanity Project (Pittsburgh Ballet Theatre). A milestone for the PBT's 40th season, choreographer Stephen Mills' Holocaust-themed work was gripping, disturbing and the stuff great dance theater is made of. PBT's interpretation was memorable.

International Poetry Forum. In its astounding 43 seasons, Samuel Hazo's series has brought to town too many world-renowned poets to list, from W.H. Auden and Gwendolyn Brooks to W.S. Merwin. But this year the funding couldn't be found, and an April 14 reading by Adam Zagajewski was the last.

moxie DaDA. The little North Side gallery didn't vanish so much as elope into cyberspace. But we'll miss its well-curated shows, often featuring cutting-edge work by local artists.