A play from Poland potently explores a homegrown war atrocity. 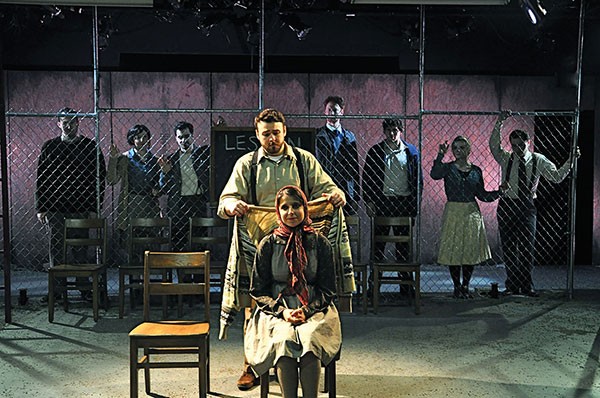 In 1941, in the Polish village of Jedwabne, a large group of Jewish residents were locked in a barn and burned alive ... and 70 years later, those are the only facts everyone agrees on. In post-war occupied Poland, the "official" version was that Nazis carried out the murder with some local help. Meanwhile, a 2000 book by Jan T. Gross, Neighbors, created an international stir claiming the town itself (its Gentiles, at any rate) killed 1,600 Jewish villagers, an act the occupying Germans permitted.

And recently, Poland's National Institute of Remembrance conducted an investigation which placed the death toll at around 300, and concluded that while the Nazis were the pogrom's instigators, many of Jedwabne's Catholic residents were active participants.

And, lucky you, here's your chance to see a play about it ... because, God knows, current events aren't depressing enough.

Pittsburgh Irish & Classical Theatre presents Our Class, by Polish writer Tadeusz Slobodzianek, adapted by Ryan Craig. Whatever the full truth of the massacre might be, a mob tortured and murdered life-long friends and neighbors. And that's the story Slobodzianek sets out to tell.

We meet 10 schoolchildren in the early 1930s — some Jews, and some not. In a few short years, they will be on one side or the other of that burning barn door. The second act charts the rest of their lives and the emotional fallout from the event.

Director Aoife Spillane-Hinks oversees a rock-solid production. (It's worth noting that she was an eleventh-hour replacement when Andrew Paul, the PICT co-founder and artistic director who was the show's announced director, was fired by the company.) Slobodzianek has written a very theatrical, almost impressionistic, play, and Spillane-Hinks' direction feels hand-in-glove with his writing. Especially compelling is her use of Susanne Ortner-Roberts, a clarinetist whose plaintive, expressive playing snakes through the entire production.

It's a very large cast featuring local and regional actors; I don't have room to mention them individually, but in any case, their power (and it's considerable) is in the collective force of their work. There are harrowing moments in the script, and this cast brings them all to heartbreaking life.

Did I say "moments"? I wish. The downside to Our Class is that — especially in light of current events — it's just too much. For nearly three hours, wave after wave of misery crashes against the audience. There's the pogrom, of course, but also the terror of living in the Soviet occupation of Poland before the war. Then here come the Nazis, then here come the Communists, then here come the Secret Police, then it's off to Israel for terrorist bombings. And by this time the kids are seniors, so here come diabetes, cancer and death.

It's a strong production of a blistering play ... but right about now I could really go for a tap-dancing chorus line.