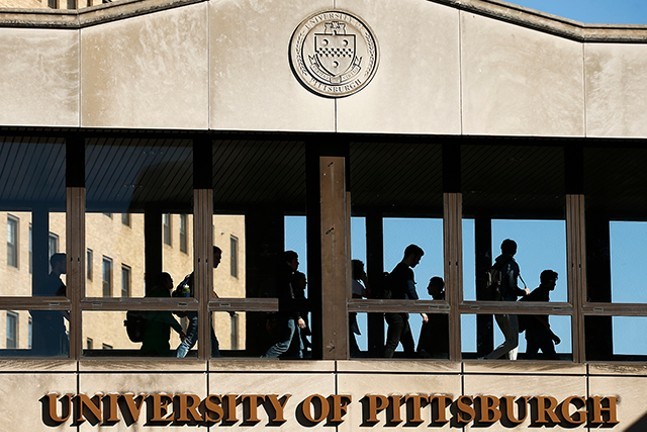 Between the announced bonus and his new raise, Gallagher has either received or will receive by the end of next year about $614,000 extra compensation compared to his 2019 base salary.

In addition to his salary, Pitt requires the chancellor to live in the Chancellor’s Residence, a university-owned property located in Shadyside. This means the acting chancellor doesn’t have to pay for mortgage or housing costs, unless they would elect to purchase another residence.

Considering the well-documented financial struggles of Pitt students, faculty and staff, Pittsburgh City Paper calculated some more equitable ways the $614,000 could be spent.

The minimum wage for Pitt student workers is currently $7.25 an hour, same as the federal minimum wage. Student workers can work a maximum of 20 hours a week through the university, typically earning wages between $7.25 to $10 an hour.

At maximum, $614,000 would be enough to give 438 student workers a $5 hourly raise or 730 students a $3 raise for 20 hours a week, over the course of 14 weeks. Assuming that all student workers are making the $7.25 minimum, this would increase wages to somewhere between $10 to $12 an hour, which is much closer to the calculated living wage for Pittsburgh.

Unlike Chancellor Gallagher, student workers are likely covering the cost of housing in addition to tuition, books, and food. If assuming rent is around $500 dollars, then working one semester at 20 hours a week for $12.25 an hour could pay for six months of rent (plus a whole lot of groceries).

Opening a grocery store (a real one)

The old 7-Eleven in Oakland was not a real grocery store, but neither is the new Forbes Street Market. The university-owned Forbes Street Market — the closest “grocery” store for individuals living on or near Pitt’s campus — is known for unreasonably high prices and a limited selection. Pitt has recognized food insecurity is a present issue for both graduate and undergraduate students, and operates a food pantry to assist those students. But, instead of choosing to profit off of students further by operating an overpriced grocery store, Pitt could have considered investing in a non-affiliated grocery store.

According to their website, the total start up cost of opening a Save-A-Lot discount grocery store ranges between $700,000 to $1.15 million. If the Chancellor were to continue to defer his $100,000 for five more years, or if the $614,000 was invested in the grocery store to begin with, Pitt could be more than halfway to producing a long term solution for helping students struggling to afford food. It would also create jobs and potentially revenue of its own that could be beneficial to non-student residents and community members.

The average amount of debt for students leaving Pitt is approximately $38,000. Students in Pennsylvania, including at Pitt, have the highest rates of student debt in the entire country.

$614,00 could eliminate the debt of 16 Pitt graduates. Gallagher's former salary from a few years ago was $525,000 a year. If he were to keep that salary, then every year moving forward, the university could just wipe the debt of more than three graduates yearly.

Last December, Pitt Dean Kenyon Bonner said raising the student minimum wage to $15 an hour would mean less student jobs would be available. Vice President of the University Senate, Robin Kear, also pointed out that some Pitt staff don’t even make $15 an hour.

That being said, why not improve staff salaries to ensure all staff, full-time, and part-time employees make at least $15 an hour? Pitt has 7,848 staff members, making a range of salaries, some on par with senior level faculty and chancellors.

Only 124 out of 480, or 26% of full professors at Pitt are female. Full professors are among the highest compensated teaching faculty at most universities.

According to The Pitt News, Pitt board chair Eva Tansky Blum commented that Gallagher’s most recent pay raise was meant to set him on par with other AAU executives. And on the levels of executive pay and professor pay, Pitt is competitive with other public AAU schools.

$614,000 is about four years of salary for a full-time professor at Pitt, which could be spent closing the hiring gap between male and female professors. But $614,000 could also be used to give all assistant professors a $1,200 raise, a $3,800 raise for all instructors, or a $2,600 raise for all lecturers, regardless of gender. Or, since overall women faculty make 79% compared to their male counterparts at Pitt, the university could directly invest the $614,000 to end the nominal pay gap.Pittsburgh City Paper fall reporting intern Elise Lavallee is a student at the University of Pittsburgh.

Pittsburgh physical therapist and Pitt professor to compete on Jeopardy!

Pittsburgh's People of the Year 2021: Labor