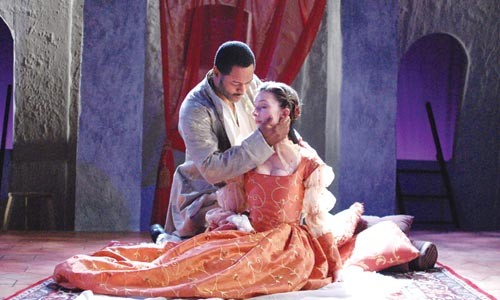 Pittsburgh Irish & Classical Theatre's version of Othello surpasses any other Shakespeare play I've seen the company produce. And it equals any performance of the show I've experienced elsewhere. Moreover, I've never been as moved as I was by Javon Johnson in the title role. Director Andrew S. Paul has come up with dynamic and perceptive staging, with most of the cast doing justice to the characters and the language.

Paul chose to present this in the intimate Henry Heymann Theater using a simple, nearly naked set, perfect for reflecting the naked emotions on the stage and bringing the story powerfully close. He has found the key to what defines classic tragedy -- generating fear and pity, winding the sorrowful tension ever more tightly, as you await the terrible, foreordained end.

And he has found the actor to make it all happen. Javon Johnson brings forth the depth and breadth of Othello's soul, the vital force, the vulnerabilities, the ever-changing emotions, shining with sunny warmth, cloudy with deep doubts, ever more stormy as he loses control. And yet, even while he dominates the stage, he seems not so much a star but rather a part of a fine ensemble.

One fundamental flaw marred opening night: Michael Hanrahan's performance as Iago. Although, from start to finish, he made clear the outlines of the man's hateful motivations, he came across as being only about attitude. Hanrahan ran roughshod over the rich meanings of the words, speaking so fast that only someone who knew the text already could grasp what he was saying. Clearly, Paul did much to quicken the pace of the whole play, yet everyone else conveyed the essentials of their speeches clearly. That includes Allison McLemore, who otherwise gave scant definition to Desdemona, making her look like a marginal victim, rather the desirable woman whose love is a major focus of what transpires.

Gianni Downs' excellent period costumes enrich the production, and Shaun Rolley's vigorous fight choreography adds to the sense of truth. And, as the play reaches its piteous end, Paul superbly brings out the dark foreboding with his evocative staging, making the most of Jackson's portrayal of enduring and confused love, a heart-wrenching experience.