It's a fantastic production of the Shakespeare tragedy 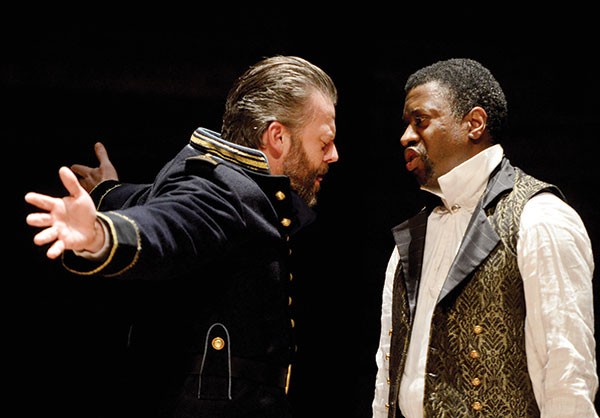 If anyone ever asks your favorite Shakespeare play, tell them it's Othello. It stands as the Bard's undercover best work, unencumbered as it is by the unreasonable hype of Hamlet, the ubiquity of Romeo and Juliet, or the constant wish you were watching a one-man show starring Falstaff that pervades all plays. Watching Pittsburgh Public Theater's production of Othello, I rarely found myself thinking of Falstaff at all, which is heavy praise indeed.

You can currently catch a fantastic production of the tragedy, directed by Ted Pappas, and I can think of very little I'd rather recommend.

For me, having only read the words, Othello's main flaw was always the stretch in emotions, to believing the brilliant Othello would decide the honorable course of action was to murder his wife. Making the shift believable is Teagle F. Bougere in the title role, and he carries it off expertly, from his quiet dignity as a leader to his shouting, jumping passion for Desdemona — which made a reunion scene I didn't even remember become my favorite in the show.

Amanda Leigh Cobb does excellent work uplifting the demeaning role of Desdemona, who, like most desired women in fiction, is given neither ambition nor inner life. (Or outer life, by the end.)

Iago gets delightful monologues where he's all but encouraged to nibble at the backdrop, and Jeremy Kushnier manages to squeeze a brilliant, show-stealing three-hour performance into two-and-a-half hours. Yes, the show is long, and one of the casualties of this is that many of the best turns of phrase get barreled through simply because it's absurd today to ask people to sit still through it, in contrast to Elizabethan times when the only alternative entertainment was watching bears eat foreigners.

Scene changes are marked by the stage darkening and the cast changing, which is pretty obvious to audience members over the age of 4. In case any toddlers are brought to watch the story of a man murdering his wife, the production adds overbearing musical cues. My roommate described these cello-dominated jingles as an attempt to ape Game of Thrones, a program I cannot abide due to its Falstafflessness.