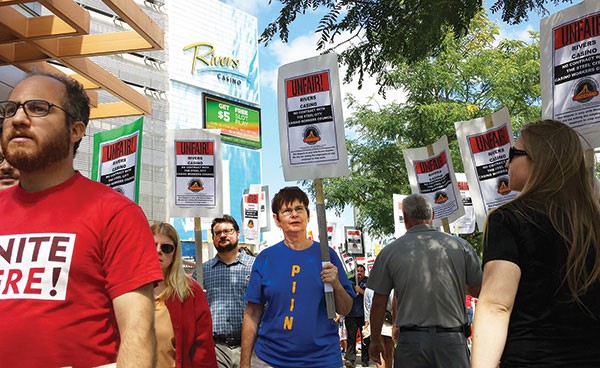 Last month, a group of 50 Rivers Casino workers gathered in the employee cafeteria to decry the casino's strict attendance policy. There they shared stories of employees who had been fired and their own personal struggles with an attendance policy they say has led to the casino's high employee-turnover rate.

"We wanted to show how serious this is," says cocktail-server Nicole Gallagher. "The energy was really great."

Following the rally, the group marched to the casino's administrative offices, where they delivered a list of changes they want made to the attendance policy.

"We'll be back," they chanted after their mission was complete.

It was one of several demonstrations that casino employees have held over the past few years in an effort to unionize their workplace. Another, this past August, drew union workers and employees engaged in similar union battles throughout the city.

Casino employees are among a wider network of workers across Pittsburgh and the country fighting to unionize. But local efforts, including the high-profile union campaign by employees at UPMC, one of Pittsburgh's largest employers, have been slow going.

Casino workers have been organizing intermittently since 2009. UPMC workers have been at it since 2012. Other ongoing campaigns in Pittsburgh include museum workers, adjunct professors, fast-food workers and security guards.

Organizers say these campaigns have been hindered by employer intimidation. Employers say their workers have simply chosen not to be represented by a union. And other observers say the decline of unions is the result of their failure to adapt to changes in the American workplace.

"If anything, we need smart, strong unions now more than ever," says Kyndall Mason, who's been involved with local efforts to organize fast-food workers through One Pittsburgh, a local workers' rights organization. "The only reason unions have lost steam is because of the systematic dismantling of their power from conservative, corporate-aligned elected officials making and passing laws that weaken a union's ability not only to organize, but to actually fight on the behalf of their workers."

Over the course of organizing efforts at Rivers Casino, employees have seen a number of victories, including increases to benefits and vacation/sick days, and other policy changes. But without union representation, organizers say there's no way to ensure these victories are permanent.

"Job security is the bottom line," says Rivers employee Fred Lapka. "I don't want to go to work scared that I could be fired at any time without doing anything wrong."

The most recent demonstration at the casino was focused on the employee attendance policy, under which workers are penalized, for example, for being even a minute late for a shift. The workers trying to unionize say the casino's inflexible policy has led to greater employee turnover, which has hindered their efforts to unionize because their voting base is in constant flux.

"Rivers Casino is proud to have been voted one of Pittsburgh's ‘Best Places to Work' by our Team Members, and we respect their rights to choose whether to be represented by a union," casino spokesperson Jack Horner said in a statement. "So far, our Team Members have chosen to remain independent."

Horner also said the 40 percent turnover rate being touted by workers, "is incorrect; the actual is much lower."

"Personnel data is proprietary, but I can tell you that we are consistent with industry standards," Horner said via email.

Unionization efforts at other Pennsylvania casinos have been successful in recent years. Presque Isle Downs and Casino in Erie, Meadows Racetrack Casino in Washington, and Harrah's Chester Casino in Philadelphia are represented by Unite Here, a national union.

Unite Here's Pittsburgh effort coincides with efforts at two other casinos run by the Rivers management group in other states. Local Unite Here spokesperson Jon Scolnik says the reason these efforts have been stalling is because Rivers has violated federal labor law.

"Rivers and its affiliates have the worst casino labor dispute outside of Las Vegas and Atlantic City," says Scolnik. "Typically, the standard in the industry is that employees have a fair process."

Since April 2013, Unite Here has filed approximately 70 complaints against Rivers Casino in Pittsburgh with the National Labor Relations Board. The NLRB found merit on 28 of the counts alleging casino management were intimidating workers and preventing them from having a fair organizing process.

Without consequences for employers, organizers say many employees are too fearful to engage in unionizing efforts, especially when they're earning low wages and living paycheck to paycheck.

"It's hard enough to make it on $10 an hour right now, and the fear of working for even less makes it hard for people to stand up to their employers," says Mason, from One Pittsburgh. "They are watching their co-workers get fired or reprimanded for being involved in organizing, and quite frankly, that fear means it is going to take longer to organize those places. I would be willing to wager that if there was no union-busting happening at these places it would take less than a year to organize."

"When did asking for a living wage, so that you can pay your rent and your bills and buy groceries without having to skip on any one of those, become a problem?" says Mason. "We should keep in mind, people are asking for a living wage from corporations and companies that are quite literally raking it in, because of the work from their low-wage workers."

But University of Pittsburgh professor James Craft, who has studied labor relations and human resources, says the decline of unions might be because organizers aren't doing a good job of explaining to employees why they're necessary.

"There's an environment that's been created that provides some of the things unions used to do and that's led to less of an interest in unions," says Craft. "I'm not saying they're unnecessary at all. I'm saying there are environmental factors that make a person feel that they don't need a union."

Craft says that unlike when unions were at their peak, most workplaces now have human-resources departments that are supposed to give employees a voice. And workforce legislation has been enacted to do everything from protecting employees from discrimination to requiring that employers provide health care.

"If you talk to someone who's a low-paid service worker, do they feel like they have a voice? Probably not," says Craft. "But we have all kinds of legislation to protect employees. These are things that used to be negotiated by unions."

Pittsburgh United, a nonprofit focusing on social and economic justice, hosts a regular meeting where 10 different organizing campaigns from around the city come together to discuss strategy and progress.

"We're seeing all of these different groups at different stages, but the commonality to all of them is they're not going to win unless they put public pressure on employers," says Pittsburgh United executive director Barney Oursler. "This kind of work takes time. But if all of the campaigns succeed, we're talking about 45,000 workers."

"Unless we create jobs that build the middle class, we're not going to have a strong economy," Oursler says. "You can fight for higher minimum wages, but in reality the only real power workers can use is collective bargaining."