There is a maxim that it’s best to under-promise and over-deliver. Ordinary Joe’s, Aspinwall’s “newest restaurant and only sports bar” (as per its website), makes good on the first half of that bargain with its name alone.

But in Aspinwall, a town that punches above its weight restaurant-wise, we figured even a self-proclaimed humble sports bar might be worth a visit.

Certainly the interior exceeded our expectations of the typical sports bar: bright and well lit, with team logos cut into metal plates standing in for autographed jerseys or hero-worshipping photos. In addition to the bar and a separate counter to accommodate, presumably, standing-room-only game crowds, there were plenty of tables, and several families dining at them.

Of course, it wouldn’t be sports bar without flat-screen TVs, and Ordinary Joe’s boasts 10 of them. But there is also a cozy back dining room, located by the wine room (a relic of the previous, fine-dining tenant, but still!), featuring high-back leather chairs and a single TV, politely switched off. 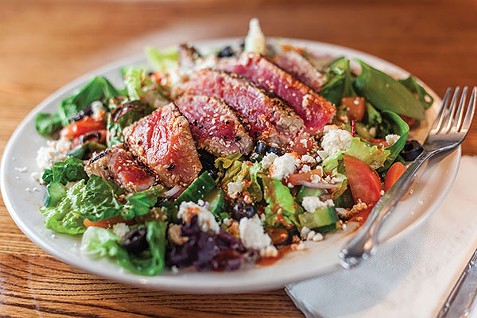 The menu was a lot more, well, ordinary. There were no entrees — just starters, salads, sandwiches and pizza. The offerings were somewhere in between up-to-date and on-trend, including poutine; beef, turkey or veggie burgers; and even a salad, featuring salmon and mango salsa. It proves that that even pub grub isn’t immune to the foodie revolution.

Unfortunately, the poutine was a misnomer, with no cheese curds in evidence. Fortunately, fries with melted mozzarella and brown gravy are still delicious, especially with gravy still bubbling at the edges of the crock and deeply browned fries resisting sogginess. The proportion of cheese was just right, too — enough for long strands to drip from each bite, but without either blanketing the fries or becoming scarce before the fries ran out. The fries were just as good served unadorned alongside a sandwich, ranging delightfully from fluffy russet to crunchy mahogany.

Potatoes may be Ordinary Joe’s forte. A side of loaded mashed potatoes was chock-full of chopped, chewy bacon (not “bits,” but crumbly morsels), and topped with melted cheddar. The only thing standing between this dish and greatness was the amount of salt. The potatoes were well seasoned, and the additions of cheese and bacon created a salt bomb that was a little hard to take.

Wings, served whole, come dry or sauced, with about 15 sauce options. Most were familiar, but we found an unusual one — Louisiana ox — to try. It was a success, combining a traditional Buffalo sauce with Cajun flavors for great depth and none of that nagging feeling that you’d have been better off sticking with the classic. Straight Buffalo sauce, which we experienced in the form of a Buffalo chicken wrap, distinguished itself with fiery flavor; this was no meek, vaguely chili-tinted butter sauce.

The foot-long hot dog was available with an array of toppings from the pizza menu, but strictly on a build-your-own basis, unlike the burgers, which are listed in several pre-set styles. The bun was ordinary at best, but the wiener was a fine, beefy, kosher-style sausage, plump and juicy.

The bourbon burger had an above-average patty — cooked to temperature — in a good roll, topped with a bourbon sauce that leaned away from cloying sweetness to deliver, instead, a bit of zesty kick. (It’s also available on wings, an option we’d like to try.) The bacon on top was again chewy and smoky, and while sriracha onion straws didn’t add much heat, their crunch was addictive. Angelique couldn’t stop plucking the ones that fell from the burger off of Jason’s plate. Onion rings, however, were unremarkable.

The pizza was mediocre sports-bar grade, with a bland crust that developed neither crispness nor chew. At least the kitchen did nail the sauce, both its flavor — not too sweet — and amount. Despite the meh crust, our overall impression was of a classic pizzeria pizza, if not one that we’d go out of our way for.

Ordinary Joe’s lives up to its name in the sense that it does not try to elevate, redefine or expand the concept of a sports bar. On the other hand, it strives to be the best ordinary sports bar that it can be, and for the most part, it delivers.